In Natural Resources and the New Frontier: Constructing Modern China’s Borderlands, Judd C. Kinzley tracks Xinjiang’s transformation from a disregarded ‘wasteland’ to a literal goldmine through the discovery of natural resources that altered the trajectory of the region’s development. Full of fascinating details drawn from painstaking archival research, the book’s scope is impressive but underplays the human consequences of colonialist resource extraction, finds Tom Marling. 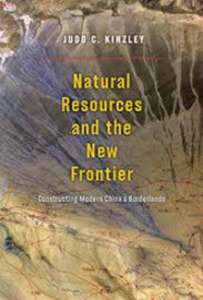 Formally christened as China’s ‘new frontier’ in 1884, Xinjiang, like other ‘new worlds’, has endured virulent colonialism. Today, under the governance of the Chinese Communist Party (CCP), it is a place to which criminals and social outcasts are banished to live alongside an indigenous population that is being systemically stripped of culture, society, history and ethnicity. Recalling the ignominious history of French, British and American testing in the Pacific Islands, it has even been irradiated in the name of nuclear defence.

Tracking Xinjiang’s transformation from a disregarded ‘wasteland’ (huang) to literal goldmine, Judd C. Kinzley’s Natural Resources and the New Frontier elaborates on how the discovery and industrialisation of natural resources rekindled dormant colonial interests and irredeemably altered the trajectory of the region’s development. Kinzley uncovers some fascinating details, including the unexpected agency and savvy of the final generations of Qing officialdom and the often oddball nature of frontier economics. New perspectives offered on China’s fitful first steps into industrialised geology, and the relationship between the geophysical and the geopolitical, are particularly valuable at a time when China is responsible for more than 85% of the world’s rare earth element (REE) production.

Echoing Eyal Weizman’s deconstruction of topography and territory in Hollow Land, Kinzley argues that the resource wealth of Xinjiang functioned as a base upon which ‘layers’ of national interest – Chinese and Soviet – accreted (and over which the governance of the province was precariously draped). These layers include the reconnaissance of, and control over, geographical and geological knowledge (spurred by gold and oil bounties, as discussed in Chapter Three), and the development of transport connections and trade institutions (Chapter Four).

Kinzley’s account of Xinjiang between 1911 and 1949 is greatly enriched by this more malleable approach to geopolitics. Cut loose from any state financial support in 1911, the province was controlled by warlords Jin Shuren and Sheng Shicai between 1928 and 1944. Bereft of cash and facing uprisings from the region’s indigenous populations, Jin and Sheng traded pastoral products like fur, pelts and wool for material and financial support from the Soviet Union. While the Great Terror was engulfing Russia proper, Soviet envoys to the borderlands were financing the construction of necessary transport links and co-founding trade institutions like the Soviet-Xinjiang Trading Company and the Bountiful Xinjiang Company. In a brief interregnum before war engulfed Asia, Kinzley argues there emerged in Xinjiang a ‘vertically integrated system of production and processing that transformed local products into commodities’ even before they left Xinjiang (a model that today is being recapitulated by China’s Belt and Road Initiative (BRI) in countries like Ethiopia and Thailand).

Unfortunately, the indigenous peoples of Xinjiang make few appearances in the text, and they are often superficially represented. This is a shame, because the book’s resource and business focus might have offered some novel insights on indigenous histories in the region. Kinzley himself briefly provides an interesting example, noting that efforts to pacify and settle nomadic groups in the 1930s were augmented by the Bountiful Xinjiang Company. The company’s agents fanned out across the province and accumulated unprecedented knowledge of nomadic goods production, and in doing so they ‘served to bind pastoral regions and their inhabitants […] into a more clearly integrated raw material hinterland’ (93).

By the birth of Communist China in 1949, while Xinjiang was producing valuable weapons-grade elements like tungsten, uranium, beryllium, lithium, tantalum and tin, it was also riven by social disintegration, as hyperinflation, crime and ethnic strife went unchecked. The book’s later chapters find that the intimate relationship between natural resources and territoriality, established in the nineteenth century, carried over into the twentieth. Kinzley points out that resource extraction industries furthered the ongoing progress of reabsorbing Xinjiang into China, by creating ‘governable spaces’ in the form of booming Han-populated oil cities like Karamay and Koktokay.

Although promising a ‘unique perspective on the origins of a simmering discontent among indigenous groups in Xinjiang’ (my emphasis), Natural Resources and the New Frontier serves more to obscure than clarify the origins of today’s unrest in the region. Sources of indigenous discontent are reduced to statistics like growing wealth inequality, while the CCP’s increasingly hardline stance – involving racial profiling, and mass surveillance, imprisonment and indoctrination – is ignored. While it is noted that former President Jiang Zemin began funnelling considerable resources into Xinjiang in the late 1980s, that this coincided with the first wave of intensified policing, military occupation and Sinification is not. So too is no mention made of the US-sanctioned post-9/11 designation of Uyghur separatists as terrorists, the 2009 riots in Urumqi or the ‘Strike Hard Campaign against Violent Terrorism’ policy that was launched in 2014. This absence is conspicuous considering that the book is being published at a time in which outcry over CCP tactics in Xinjiang has reached a comparative climax, and in which the central role of institutions of higher education in effecting this policy is becoming better understood.

A more thoroughgoing examination of the paramilitary organisation known as the Xinjiang Production and Construction Corps (XPCC, aka ‘the bingtuan’), extending into the modern day, might have served to better thread the resource focus together with these contemporary social dynamics. Conceived in the 1950s as a means by which to demobilise People’s Liberation Army troops after the Korean War and to rapidly increase the Han population of Xinjiang, today the XPCC is a private corporation that accounts for 17% of the Xinjiang economy, and its vast agricultural output is dependent on controlling and exploiting natural resources like water and soil. The XPCC is, among other things, a media conglomerate, a property developer and a prison operator. While the rise of a new generation of ‘resource cities’ in the deserts of Xinjiang may recall past boom towns like Karamay, the crucial difference is that these new cities are now designed, built, owned, operated and populated by the XPCC.

Natural Resources and the New Frontier abounds with the kinds of details that only painstaking archival work can uncover. Its scope is impressive, and Kinzley offers fresh insights on everything from the failings of the Nanjing government under Chiang-Kai Shek to the unique implementation of Mao’s Great Leap Forward in the borderlands. It would, however, best be read as a companion to a more comprehensive recent work like Justin Jacob’s Xinjiang and the Modern Chinese State (University of Washington Press, 2016). In the context of resource histories, it is also a very different creature from Donald Fixico’s The Invasion of Indian Country in the Twentieth Century or even Eduardo Galeano’s Open Veins of Latin America, in which the human consequences of colonialist resource extraction are brought to the foreground.

Tom Marling has a PhD in History from Hong Kong Baptist University. His research interests include late-Qing tabloid fiction and the urban environment of Shanghai, and the history of pre-CCP organised labour in south China. He is one of the co-editors of Collected Essays of To the Seas and Beyond: An International Conference on the Maritime Silk Road (Hong Kong Museum of History and Hong Kong Baptist University Department of History, 2018).