In Looking Back and Living Forward: Indigenous Research Rising Up, Jennifer Markides and Laura Forsythe bring together contributors to explore a wide range of topics relating to Indigenous philosophies, methodologies, histories, resurgences, theories and practices. This collection will open readers’ eyes to the diversity and depth of research currently being undertaken in Indigenous studies and is recommended to those looking to expand their understanding and knowledge, writes Jim Reynolds. 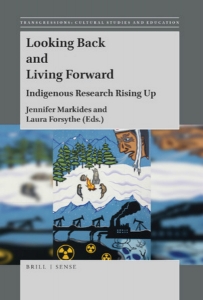 Collections of papers presented at academic conferences are sometimes disappointing: the passion in the conference room does not always travel well to the printed book that appears a number of months later. In cold print, the differing approaches taken and abilities shown can appear jarring, even in collections of a few essays on closely related topics in one discipline. The challenge of producing a book with 30 papers that span several disciplines therefore might seem too great to undertake. Fortunately, Jennifer Markides and Laura Forsythe, the editors of Looking Back and Living Forward: Indigenous Research Rising Up, were not deterred, and the result is a book which has a freshness and variety and that works well as a sampling of many different topics in Indigenous studies and the various approaches to them.

Looking Back and Living Forward arose from an international conference hosted by the University of Manitoba Native Studies Graduate Students Association in March 2017. The introduction by Markides explains that the conference showcased the work of Indigenous and non-Indigenous scholars from around the world. Presenters shared their research and explorations of Indigenous philosophies, methodologies, histories, resurgences, theories and practices. The contributors to the book were encouraged to stay true to the writing style and formatting germane to their field. Therefore, the citations and referencing vary from chapter to chapter. The contributors include many graduate students and the intended audience is scholars, teachers, educators and students seeking works in Indigenous research. The editors ‘hope that anyone can pick up this book, regardless of discipline, and find some offerings that align with their interests and discover other readings that they might not have otherwise come across’. This hope was amply fulfilled in my case.

The book is divided into four related parts: ‘Defending the Sacred: Land and Relationships’; ‘Sharing Intergenerational Teachings: Language and Stories’; ‘Re-Dressing Colonial Legacies: Counter-Narratives of Resistance’; and ‘Communities of Healing and Strength: Redirection to Resurgence’. The introduction gives a list that shows the breadth of the topics covered, including cartography; cattle systems and traditions; Elders healing in federal prisons; ethical considerations in research relationships; food sovereignty; history and colonisation; Indigenous epistemologies; oral traditions in the legal system; and video games for cultural learning.  If nothing else, this book demonstrates the wide scope of Indigenous research. Each chapter is between eight and ten pages long and has a list of references which generally appear to be comprehensive, although there is no index to help locate specific issues within the many contributions.

Most of the papers are written by authors with affiliations to Canadian institutions and relate to Canadian topics, although many will still be relevant to readers from other countries. Exceptions include a study by Saymore Petros Ndou and Michael Chimonyo on the Indigenous knowledge of Zulu farmers and the socio-economic importance and cultural significance of Indigenous Nguni cattle products in rural households and another by Jusung Kim on Korean Indigenous epistemologies with notes on the corresponding epistemologies of Indigenous scholarship.  Eduardo Vergolino examines Indigenous schooling in Northeast Brazil with comparisons to Canada. Monica Morales-Good describes the challenges faced in presenting oral tradition as evidence in court proceedings in Mexico and Canada.

My own background is that of a lawyer who has acted for Indigenous clients for 40 years, primarily in British Columbia. Therefore, I gave a closer reading to those chapters that related to law and the West Coast. I am not qualified to comment on Morales-Good’s review of the experience of Mexican Indigenous peoples before the courts, but her analysis of the difficulties faced by the Gitksan and Wet’suwet’en people in their Aboriginal title litigation in the British Columbia Supreme Court is well-written and persuasive. However, as a lawyer, I would have welcomed some discussion of the subsequent ruling of the Supreme Court of Canada sending the case back for rehearing because of the failure of the trial judge to give proper weight to their oral evidence. Karine Martel does review in some detail a decision of the Supreme Court of Canada, the Daniels decision, which decided that Métis people are within a provision of the Canadian constitution, giving the federal government (and not provincial governments) jurisdiction over ‘Indians’. It contains a penetrating analysis that shows how the Court applied a colonial mindset to reach its decision. Daniels is generally regarded as an important victory providing a stronger foundation from which the Métis can negotiate with the federal government for greater recognition of their rights. Martel argues that this foundation is flawed.

Non-legal chapters that caught my eye included those by Irwin Oostindie and by Amanda Appasamy, Cassandra Szabo and Jordan Tabobondung. Oostindie examines the role played by the local Coast Salish culture in the celebrations for the 2010 Winter Olympic Games and the 150th anniversary of Canadian confederation in 2017. He concludes that:

When it is not blended with Indigenous culture from across Canada, the Coast Salish cultural resurgence is therefore hyper-commodified, fetishized and packaged for the notion of aboriginal cultural tourism.

This is an insightful discussion of one example of the pressure faced by Indigenous groups to either participate in such celebrations or protest them and lose whatever benefits may be gained – a dilemma that is present to a greater extent in much economic development such as pipeline expansion. The chapter by Appasamy, Szabo and Tabobondung gives the result of a survey to determine the perceptions of students at the University of Winnipeg of a requirement that they take a course about Indigenous peoples. The survey results suggested that many students feel that the requirement will decrease discrimination and increase awareness about Indigenous issues.

Reading a scholarly monograph by a single author can be an intense and personal experience as one progressively learns more about the author’s thinking and the narrative being developed during the journey from the first to the last page, usually with 200 or more pages in-between. But sometimes it can seem like trying to read a dense novel in another language, needing to constantly consult a dictionary and look out for signposts. In contrast, the book under review is like a collection of short stories told in straightforward prose that can be dipped into to find something of interest, perhaps in a discipline or topic that is entirely new to the reader. It will certainly open the reader’s eyes to the diversity and depth of research being carried out in Indigenous studies and can be recommended to anyone wishing to expand their understanding and knowledge.

Jim Reynolds has practised, taught and written about Aboriginal law in Vancouver, Canada, for 40 years. His latest book, Aboriginal Peoples and the Law: A Critical Introduction was published by UBC Press in 2018.