In Racial Cities: Governance and the Segregation of Romani People in Urban Europe, Giovanni Picker explores how race has been central to the emergence and continuation of Romani segregation in Europe since World War Two. The book is a significant contribution to scholarship concerned with the impact of racist systems on urban dynamics, writes India Madisetti. 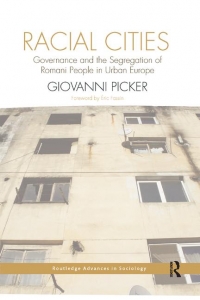 Earmarked as one of ‘Europe’s most pressing human rights and social inclusion priorities’, the Roma number between 8 and 10 million across the continent (Directorate-General for Employment, Social Affairs and Inclusion, 2004, 6). Since their arrival from Northern India in the early sixteenth century, the relationship between the Roma and endemic Europeans has oscillated between periods of economic cooperation, and those fraught with fierce racial discrimination. In post-1989 Europe, it was thought that Roma integration projects would gain more traction, and the community’s situation would improve drastically in line with modernisation. However, with the recent resurgence of far-right nationalism across Europe throughout the last decade, the fate of the Roma community grows increasingly uncertain.

Giovanni Picker’s book comes at a point when both politics and the field of Romani Studies are undergoing transformations: Romani scholars and activists are becoming more vocal in their critiques of the dominant narratives perpetuated by non-Roma, and are advocating for increased Roma involvement in both academic and political projects. Racial Cities: Governance and the Segregation of Romani People in Urban Europe explores the genesis and persistence of Romani segregation in the post-World War II socio-political landscape. Drawing on the legacy of Europe’s colonial projects in French Rabat, British New Delhi and Italian Addis Ababa, Picker argues that the modern social construction of race arose out of the need to (1) delineate between the coloniser and the native ‘Other’; and (2) create a hierarchy of power that overwhelmingly benefited white Europeans. Thus defining race as ‘a politically charged social force that regulates social arrangements’, Racial Cities examines the relationship between instances of colonial displacement, omission, containment and cohesion strategies targeted at the native ‘Other’, and the legacies of this colonial framework as they manifest in Roma segregation projects (8).

Picker expands upon Angus Bancroft’s (2005) classification of ‘segregation rationales’ underlying Roma policies to operationalise the language of race as a driving force in perpetuating not only interpersonal and economic differences, but also socio-spatial distance (21). The text’s central thesis aims to explore ‘how race as atypical colonial product variously yet primarily sustains and regulates the segregation of Romani people’ across modern Europe (8). Picker’s book thus calls for an intersectional, interdimensional approach to urban policy research which works not only horizontally across history and cultural evolution, but also vertically across power hierarchies constructed along lines of race, socioeconomic status and culturally and linguistically embedded stereotypes.

Picker’s Introduction establishes a working definition of ‘Gypsy Urban Areas’, or GUAs, and draws attention to the complexity and dynamism of the segregation process. Setting out to ‘detect local segregating mechanisms and systematically uncover their varied logics’, Racial Cities frames both fieldwork encounters and the resulting analyses not as definite parallels to colonial projects, but as possible instances of convergence in terms of historical rationale and segregation outcome (6).

Chapter One introduces the concept of nodes – developed from the relationship between colonial metropole and ghettoised periphery settlement – and contextualises the neo-colonial framework within the landscape of modern neoliberalism. Chapter Two leverages the case study of Cluj-Napoca, Romania, to assess the prevalence of displacement policies motivated by perceived hygiene crises. Based on interview data and fieldwork conducted with local Romanian residents of the city, this chapter dissects the haphazard creation and subsequent expansion of the Pata Rât settlement next to the municipal landfill. Chapter Three problematises public policies characterised by their omission of any and all mentions of the intentional socio-spatial, economic and political marginalisation of the Roma in official documents, looking specifically at the case of the Rancitelli settlement in Pescara, Italy. Chapter Four compares permutations of containment policies across case studies in Florence, Italy, and Montreuil, France, delving deeper into competing ideas of cultural protection and socio-political control. Chapter Five explores cases of cohesion, focusing on Salford, UK, as a case study of instances where policy is centred on bolstering relationships between the Roma and local British residents. Chapter Six, entitled ‘Correspondences’, serves to synthesise these case studies within the framework earlier established in Chapter One. The chapter serves as a point of reflection on the complex network of relationships between race, GUAs and the legacy of Europe’s colonial projects in modern Roma segregation policies.

Though it is valuable to dissect how colonial-era European policy has been reflected in the establishment and proliferation of post-World War II Roma segregation projects, Picker’s direct comparison between the two reduces the complexity of Roma disenfranchisement to an issue of race without fully considering the paradoxical relationship between race and poverty that emerges in modern European Roma policy. The paradox lies in the fact that while race is a contributing factor in issues of poverty because of structural racism, extreme poverty faced by the Roma as a racial group is also a contributing factor in the maintenance of structural racism and damaging societal attitudes. Furthermore, in the last two decades in particular, European integration policies targeting the Roma have left race out of the strategy entirely. By framing disenfranchisement as an issue of poverty, funds earmarked specifically for Roma communities are redistributed to communities defined by vulnerability (Elena Marushiakova and Vesselin Popov, 2015).

In addition, in characterising the community as the equivalent of colonial ‘natives’, the central argument fails to acknowledge both the history of the Roma as a non-endemic population, and the impact of GUA politics on the Roma themselves. One must question how far this field-based study pushes beyond Western-centric discourses when it adopts colonialism as a framework, and it does little to examine GUAs and segregation rationales from the perspective of Roma community members and scholars in the field. As such, an additional publication would be even more valuable if it further considered the legacy of colonial European race politics in contemporary segregation projects as a framework which explicitly incorporates cultural trauma, and problematised GUAs as sites where issues of race, socioeconomic status, mutual distrust and a lack of political will intersect from the perspective of the Roma community, as they experience it.

Ultimately, while Picker’s Racial Cities might have greater impact if it reflected more thoroughly on cultural trauma and mutual distrust as key issues in debates surrounding the proliferation of Roma segregation and disenfranchisement in post-World War II Europe, it serves as a significant contribution to scholarship concerned with the impact of racist systems on urban dynamics.

India Madisetti obtained her MSc from Green Templeton College, University of Oxford, and is a current PGDE Candidate at Canterbury Christ Church University. Her research on the schooling experiences of the Hungarian Roma intelligentsia explores Roma students’ identity formation in school spaces.