Voter turnout is decreasing in mature democracies at an alarming rate since the advent of digital communications, a trend that is significantly affecting the legitimacy of political parties. Does this mean that parties are fated to disappear? In The Digital Party: Political Organisation and Online Democracy, Paolo Gerbaudo argues that political parties are far from becoming obsolete. Discussing the emergence and implications of a new type of party in the digital era characterised by its strong dependence on interactive online platforms, this book is necessary reading, writes David Jofré. 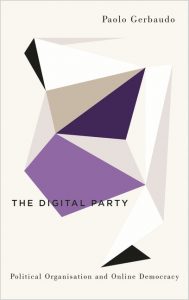 European politics has been in turmoil since the 2008 economic crisis. While capitalism has been put into question in countries affected by international debt, rapid technological developments are redefining many aspects of our political life. Changes in governments, electoral campaigns and civil society have been a matter of intense scholarly debate. Yet, some of these transformations have escaped our analysis, such as those in today’s political parties. Paolo Gerbaudo’s latest book, The Digital Party, addresses this particular topic in light of three main cases: the 5 Stelle Movement in Italy, the Pirate Parties in Northern Europe and Podemos in Spain.

Aiming to discuss organisational innovation in political parties from an academic point of view, The Digital Party works as a tool to overcome both uncritical celebration and biased criticism. The author proposes that we see the digital party both as a specific type of party, different from previous party forms, and as a transformative trend in today’s party system concerning membership, participation and leadership. The book successfully represents the aims of Pluto Press’s ‘Digital Barricades’ series, which offers a selection of monographs focused on how citizens bond and resist in new ways through the use of digital media. Furthermore, as the Director of the Centre for Digital Culture at King’s College London, with a wealth of publications on digital media, Gerbaudo is one of the best placed authors to lead such a discussion.

Methodologically speaking, the book breaks with the single case-study format that abounds in this field by systematising the existing data on various digital party experiences and recalling the author’s interviews and direct observations after visits to party offices and campaign events. Gerbaudo confidently argues that the digital party has emerged as a response to ‘the need to radically update the organisational forms of politics and adapt them to the digital era’ (190). In doing so, these new parties represent the promise of more democratic and direct politics through the conversion of social media into decision-making tools. Since socio-economic inequalities pervade most Western political systems, the observed digitalisation of party affairs is producing a fracture between insiders and connected outsiders, which Gerbaudo defines in the book as those with high levels of digital connectivity but who are excluded from democracy and welfare provisions.

The book begins with the history of political party formations in order to retrieve categories concerning ideology, social composition and organisational templates that the author then uses to build his concept of the digital party. In this sense, he claims in Chapter One that ‘it is necessary to lend one eye to the present, and its inventions, and another to the past and the long history of development of and reflections on political parties’ (22). We learn here that parties have always been affected by the communicational trends of their time, with the crystal-clear example of what Gerbaudo calls the TV party, a type of party that thrived during the peak of mass television in the 1960s. In Chapter Three, the author develops the concept of platformisation, which is when parties mimic the organisational template of successful social media companies in order to engage more effectively with their supporters and embrace a utopian desire to get rid of bureaucracy. This is how digital parties like the 5 Stelle Movement, through their Rousseau platform, honour their name: aggregating user data for decision-making processes, simplifying membership to a like button, relying on the free labour of their digital sympathisers and primarily using cloud infrastructure.

Chapter Seven stands out as the best part of the book due to Gerbaudo’s warnings regarding the fragility of digital democracy. Once the book has examined in detail all the aforementioned digitalisation trends and their effects on party membership and participationist ideology (Chapter Four), in Chapter Seven the author walks us through his concept of the hyperleader. The hyperleader is the plebiscitary-charismatic figure who represents the party in the media: a sort of celebrity that uses social media to deliver instant speeches and crowdsource ideas. Gerbaudo offers a particularly gloomy example of what a hyperleader is: Donald Trump. This new kind of party leadership, present in most of the cases explored in the book, helps Gerbaudo to unravel the persistence of top-down dynamics in supposedly decentralised networks, and thus debunk the most utopian aspects of participationism.

Gerbaudo manages to navigate several bodies of literature and identify relevant crossroads to understand what is really new in digital parties. With some enviable synthesising abilities, he addresses the most crucial aspects of political party theory and repurposes them as a framework to delve into online platforms and digital participation. His writing style definitely plays in his favour. Plenty of rich descriptions of the 5 Stelle Movement and other similar cases, and a clear structure in each chapter, are devices that help guide the reader effectively. At the beginning of each chapter, Gerbaudo gives the full argument away, with the only mistake being the decision to not summarise each chapter at its end as in most contemporary monographs. It is especially noteworthy how Gerbaudo makes creative and playful efforts to seduce ‘techies’ with sarcasm and allusions to popular culture in the book’s headings: for instance, unmissable references to Star Wars­.

Gerbaudo’s book is audacious in its aims, but we should not underestimate the complexity of the topic under study. The phenomenon of digital parties is perhaps too recent to be fully understood yet. Despite its length, the book overlooks some dimensions of the rise of digital parties, while it constantly reiterates others. For instance, the analyses of platformisation, virtualisation and online decision-making, which tend to naturally overlap, are treated as separate topics in three different chapters. More problematic is that Gerbaudo does not attempt to address whether digital parties, with their actions, are responsible for shaping today’s technological environment like other political entrepreneurs. In this regard, the book has been clearly framed around the influence of the internet on political parties, and not the other way around. This is, in any case, an elusive question in most publications on online politics. Anthony Giddens’s structuration theory sets an important precedent by helping us understand how agents create and reproduce the very social structures around them and their actions. Such a valuable theoretical contribution could have provided the book with a comparative advantage over its predecessors, especially on this issue since parties are long-standing actors in Western political systems.

Despite these limitations, The Digital Party is a necessary reading. It ventures into uncharted territory to bring us back to the political party, presumed dead by most cyber-optimists. The cases explored in the book want to persuade us that, amidst turbulent times, some parties survive by creating their own software to facilitate members’ direct participation in deliberation and decision-making. But such a grand theory should not ignore the risks implied in this, which is what Gerbaudo warns us about when revealing the connections between party hyperleadership and populism. For this reason, the monograph will appeal not only to media scholars but also political scientists, campaign officers and IT developers. There are signs that show us how digitalisation is spreading across traditional parties, which basically fear becoming irrelevant. So, with this book, we can now count on a roadmap to approach normative dilemmas that begin to arise with these developments: mainly the growing economic gap between insiders and connected outsiders, but also the increasingly popular prejudice against bureaucracy, which may undermine efficiency in times of data abundance.

Dr David Jofré is a scholar in Politics graduated from the School of Social and Political Science at the University of Glasgow, Scotland. He also holds a MSc in Political Communication from the same university. His research has focused on the relationship between social movements and media in South America, with an emphasis on activists’ adaptation to socio-technological change, the organisational templates of mobilisation and the process of creation of new activist media practices in a rapidly changing environment.