In Russia, BRICS and the Disruption of Global Order, Rachel S. Salzman offers a new study that seeks to understand the driving forces behind the coalition that is BRICS – formed of Brazil, Russia, India, China and South Africa –  and dispel the misconceptions that surround it. The book sheds unique light upon this contested and under-researched group of nations and highlights the transient nature of the system of global governance, writes Erdem Lamazhapov. 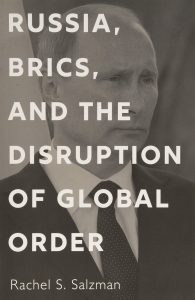 In the eyes of a realist reader endemic to the Western security establishment, the narrative presented by Rachel S. Salzman in Russia, BRICS and the Disruption of the Global Order may appear as nightmarish, perhaps even unfathomable. It is a story of a plot to overturn the stable world order, a rebellion against the post-Cold War institutional alignment. As such, the book brings the reader that adheres to this notion of Euro-Atlantic supremacy to understand the driving forces that bind the coalition that is BRICS – namely, Brazil, Russia, India and China, joined in 2010 by South Africa –  and dispels any misconceptions that surround it. Yet, paradoxically, it may reaffirm many readers’ belief in the stability of the Euro-Atlantic global order.

Salzman takes up the constructivist concepts of ‘world order’ and ‘global governance’, analysing how familiar institutions first came to hegemony, and later came to be challenged. Methodologically, the author chooses to concentrate primarily on the rhetorical dimension of the rise of BRICS, at the same time analysing the way in which rhetoric brought the organisation to prominence. The book thus presents a case study of the way speech acts morph into tangible, real-world policy.

The narrative begins at the moment of inception of the present world order, with an ascendant West and Russia at the fringe of the new system. The first chapter thus serves to demonstrate the factors that led to the failure to integrate Russia into the Euro-Atlantic community as a junior partner within ‘a larger and more vital West’, an idea often repeated by the late US National Security Advisor Zbigniew Brzezinski. Leaving aside the plausibility of such a turn of events, Salzman proceeds to outline the Russian responses to this change in global governance.

Tracing the origins of BRICS to the positioning of BRICS nations against the West, the author shows the economic justification behind this unlikely group of states in the second chapter. This section is primarily concerned with the institutional stage for the birth of BRICS and touches on the question of what constitutes global governance in principle.

In the third chapter, the author analyses the ideational foundations of BRICS in the corridors of the Russian foreign ministry and general schools of thought on Russia’s civilisational role in global history. This serves as a brief excursion into the positioning of Russia as an existential ‘other’ to the Western world as it is conceptualised by Russians and by Westerners alike. This primarily concerns the rhetorical shift from Westernism to (a broadly defined) Slavophilia during Vladimir Putin’s first two presidential terms.

The fourth chapter describes Dmitry Medvedev’s short, bizarre and contradictory presidency, marked simultaneously by an initial drive towards rapprochement with the West and the subsequent Russo-Georgian War in August 2008. As such, it drafts the practical impetus that led to the rhetorical ascendance of BRICS as a competitor to the Western order.

In the following chapter, Salzman describes the process of how BRICS came to be seen, at least rhetorically, as a counterbalance to the Western-dominated world in the wake of the annexation of Crimea. The author identifies the rhetorical refuge that BRICS provided to Russian leadership following its ostracisation within Western institutions. Most importantly, Salzman demonstrates how Russia was able to rally support from other BRICS nations in the form of passive resistance to the current system of global governance.

The conclusion brings the reader back to the starting point: the Euro-Atlantic world order. ‘BRICS is no longer a big story in global governance’ (138), Salzman concludes. On the one hand, she shows the strong desire of the BRICS nations to overturn the status quo and challenge the West’s normative hegemony. On the other hand, she reaffirms the fact that the existing system of global governance has no competition by reminding the reader of the ‘circular firing squad’ nature of cooperation between the nations desiring to overturn it: the difference in interests of BRICS countries provides little potential for cooperation towards a common objective.

Perhaps the most valuable contribution of this study is that it demonstrates that dissatisfaction with the status quo is not endemic to the Russian leadership. The brief prominence of BRICS thus demonstrates that its constitutive nations, while reluctant to openly present a ‘challenge to Western ideational control of global governance’ (140), have ‘transformed the image of the international liberal order’ (144).

At the same time, the narrative of BRICS as a story of how a disgruntled Russia found a way to vent its dissatisfaction does not seem entirely convincing, especially in light of how little prominence other BRICS nations receive in the study. Rather than a conscious attempt to construct a counterbalance to Western institutions, it seems that BRICS owes its inception to a confluence of domestic and international political factors in each nation. As such, in achieving the goal of bringing the reader closer to understanding the rationale and the motivations behind decision-making in Russian foreign policy, the book inadvertently contributes to ‘othering’ Russia as the West’s nemesis by highlighting its civilisational baggage. This is especially evident from Salzman’s stylistic choices: referring to the ‘disruption of global order’, ‘upending the current international system’ (xviii) and the ‘stability of the current system’ (140).

Another concern is whether the author’s decision to focus simply on the rhetorical dimension overinflates the significance that BRICS had in terms of actual policy. Words notwithstanding, the economic and political impact of BRICS has always fallen short of ‘constraining American global hegemony’ (140), especially insofar as influence upon Western economic institutions is concerned. After all, BRICS is an organisation constructed along trade rationales, and draws its gravity from the economic performance of its nations. In other words, it is unclear whether BRICS indeed is more than the sum of its parts.

Setting aside these considerations, Russia, BRICS and the Disruption of Global Order sheds a unique light upon this contested and under-researched coalition. Salzman provides a nuanced understanding of the inner workings of the Russian political apparatus and highlights the transient nature of the system of global governance.

Erdem Lamazhapov is an MPhil student at the University of Oslo and a postgraduate fellow at the Fridtjof Nansen Institute. His research is on securitisation theory and Russian security policy and environment.