In Making The Black Jacobins: C. L. R. James and the Drama of History, Rachel Douglas examines the formation of James’s groundbreaking work on the Haitian Revolution, exploring its genesis, transformations and afterlives through its different texts, stagings and editions. Positioning The Black Jacobins as a ‘palimpsestually multilayered text-network’ formed through processes of rewriting and revision, this book is a welcome addition to scholarship on James and offers a thoughtful approach to the relationship between Marxist theory and historical analysis, writes Scott Timcke. 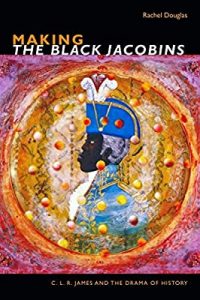 There are many ways to look at the relationship between Marxist theory and historical analysis. Through ‘telling the story of the actual writing of The Black Jacobins’ (5), Rachel Douglas offers one of the more thoughtful approaches to that relationship in recent years. Her goal is to show how C. L. R. James (1901-89), one of the preeminent social theorists of the twentieth century (see Bridget Brereton 2014), used several theatrical and historiographical iterations to reform his representation of the past. ‘My task has been to trace the process of The Black Jacobins’ own development’, Douglas writes, ‘working out its form of movement and method of change’ (211). This involves comparative readings of four main texts, these being the play text Toussaint Louverture (1936), the first and second editions of The Black Jacobins (1938 and 1963) and a second play text, The Black Jacobins (1967). In addition to tracking changes to the text’s body, Douglas attends to materials like ‘prefaces, notes, appendixes, epilogues, and bibliographies’ (6) to ‘document the work’s multiple becomings’ (2) over six decades. In the end, Douglas comes to regard The Black Jacobins as a ‘palimpsestually multilayered text-network’ (213), but also so much more.

Given the different stagings, editions, audiences and purposes that orbit The Black Jacobins, it is perhaps fitting that Making The Black Jacobins has several scholarly audiences in mind too. These audiences range from those interested in book production and dramatology to Marxian historiography and contemporary postcolonial studies, among others. Initially I thought this might have been one audience too many, but as the book progressed, my skepticism eased. From my vantage, Douglas delivers on the central goal of the book, which is to ‘[survey] for the first time in its entirety the history of James’s masterpiece and its transformations as history and play’ (2). Due to the range of audiences, it is best that scholars from other disciplines offer their appraisal and verdict, although I anticipate it will be a favourable one.

Douglas has enormous esteem for The Black Jacobins, calling it ‘a remarkable exemplar of Marxist historical writing’ (210). Indeed, she considers it to be a lifelong project with ‘multiple engagements’ with the Haitian Revolution (1791-1804), ‘the only successful slave-led revolt in history’, as James subtitled the event in his 1936 play, Toussaint Louverture. Alongside the central thesis, which I will address in a moment, there is considerable value in the various chapters and their sub-sections. For example, in Chapter One, one finds an excellent discussion of drama being a more egalitarian form due to the presence of an audience and thus suitable to address the problems that stem from ‘silencing the past’. Chapter Two discusses James’s archival trips to France in the early 1930s, primarily between winter 1933 to spring 1934, his meetings with towering intellectuals like Pierre Naville, Léon-Gontran Damas, Tiemoko Garan Kouyaté and Alfred Auguste Nemours, and how Trotskyism and perspectives from French West Africa and the Francophone Caribbean shaped The Black Jacobins (78-82).

Douglas also tackles James’s various agreements and disagreements with historian Eric Williams (82-85), with James taking credit for providing Williams with the central thesis of his study Capitalism and Slavery, and claiming that ‘there are certain places where I wrote into Williams’ book’ (James as quoted by Douglas, 83). Williams would later become the first Prime Minister of Trinidad and Tobago following independence in 1962. In Chapter Three Douglas invites comparison of her reading of James to David Scott’s (2004) and Susan Gillman’s (2013) respective approaches to the analysis of The Black Jacobins. Given the focus on concrete social relations in The Black Jacobins, Douglas argues it makes little sense ‘to privilege only the formal characteristics’ (94), especially so as the text emerges from dialectical reasoning.

Throughout the book, Douglas draws favourable parallels to Karl Marx’s rewriting of the Grundrisse and Capital. Like Marx, ‘rewriting’ was one of James’s ‘working methods’. Douglas deems this rewriting to encompass several components. First, as an exercise in ‘rewriting historical misrepresentations’ through ‘writing back’ to colonial propagandists (210). Next, as James himself states outright, to ‘extend the heritage of Marx and Lenin’ (James as quoted by Douglas, 209). Third is to see rewriting as the application of Marxist historiography predicated upon a dialectical relationship of a changing text to a changing context. This could be thought of as a special variation of the ‘permanent revolution’. Finally, as Douglas puts it, ‘what rewriting encapsulates is the dynamic of revolutionary process’ (211).

Some of these principles can be found in Toussaint L’Ouverture’s (1743–1803) various re-writings of his 1797 letter to the French Directory. This letter, reprinted in full halfway through The Black Jacobins, shows how the Haitian revolutionary leadership warned off efforts by France to reimpose the system of slavery as doing so would be ‘to attempt the impossible.’ Formerly enslaved, Toussaint was the first Head of State of the revolutionary government. James frames this letter as a world historical document dictated and hammered into ‘adequate shape’. The result is not only a ‘masterpiece of prose excelled by no other writer of the revolution’, but also of world historical importance on par with ‘Pericles, Tom Paine, Jefferson, Marx and Engels’ whose work similarly awoke ‘aspirations that sleep in the hearts of the majority in every age’ (see James 1989, 195-198). Like Toussaint, James hammered The Black Jacobins into ‘adequate shape’. But unlike Toussaint, James is much more aware of the needs of the audience and the world in which they live. For example, on multiple occasions James shows how Toussaint did not fully address the needs of the revolutionary masses. James describes this as the gap between the agenda of revolutionary leadership and the masses, offering it as a caution for decolonisation movements.

For Douglas, rewriting is dialectical engagement between author and audience. So, on the topic of reception, when I was lecturing at The University of The West Indies, St. Augustine campus, I taught The Black Jacobins to undergraduates, reading one chapter a week with them for a semester. These students did not respond well to James’s Toussaint. While they forgave some political errors, his willingness early on to betray the revolution in exchange for his own advancement resonated with the politics of elite enrichment that organised their lives. James’s Toussaint personified all the errors of the scholar-statemen in the post-independence period. If, as Douglas argues, rewriting for James was ‘to make the Caribbean see itself’ (212), then these students saw disdain for their political class. It is probably because ‘the fundamentals’, as James wrote, ‘have not changed’ (James 1989, 406).

Of late there has been a trend in what Jonathan Scott (2018) calls ‘the Americanisation of James’. This Americanisation downplays James’s critiques of capitalism and imperialism and emphasises self-fashioning and cultural identity. Thankfully, Douglas does neither. But the issues Scott have observed equally apply to the West Indies as the politics of cultural nationalism that Anton Allahar (2004) describes so well have succeeded in marginalising radical politics. Occasionally, the 1963 edition of The Black Jacobins—wherein James reduced the overt references to Marxism—is cited to claim that Marxism has nothing to offer the Caribbean. So, I am heartened to see that Douglas acknowledges that the 1963 edition reflects ‘James’s materialist Marxist conceptions and methods’ (94). Indeed, Douglas demonstrates how this edition benefits from James’s post-war theorising about spontaneous self-organisation of the working class and their political mobilisation, reflected, for instance, in the internal revolts to South African Apartheid during the 1980s. In short, James, like many of the best Marxist historians, uses theory to convey the central ideas to ‘general readers’, thereby helping them understand their historical condition.

The concluding pages show that Douglas aims to link Notes on Dialectics to The Black Jacobins; while James thought the former to be his strongest intellectual contribution insofar that he sought to recover dialectics for democratic collaborative reasoning over uncertainties, it is the latter that is more readily read and taught. While embracing James’s grand narrative, Douglas argues that much like how The Black Jacobins is ‘unfinished and provisional’, so too is West Indian identity mutable (132). Indeed, arguably identity, ‘like the Haitian Revolution itself—can never be finished, nor ever end neatly and complacently in a closed state of serene repose like an image of the complete, finished bourgeois world’ (212). Douglas’s words are reminiscent of Michaeline Crichlow’s remarks about decolonisation being the refusal of any ‘hegemonic frame of self-referencing’ as well as any ‘re-ordering of discriminatory development’ (2012, 131). In Douglas’s reading of Notes on Dialectics, James rejects foreclosed and fixed politics, likening it to ‘a closed book’. Accordingly, rewriting can limit fixed politics creating fixed identities; it can help a social democratic polity. In the end, Douglas’s study reveals as much about Notes on Dialectics as it does The Black Jacobins. It is a welcome addition.