In this bookshop guide, Katy Dycus takes us on a tour of some of the best bookshops in Madrid, Spain. If there’s a bookshop that you think others should visit in a particular city, further information about contributing follows this article. 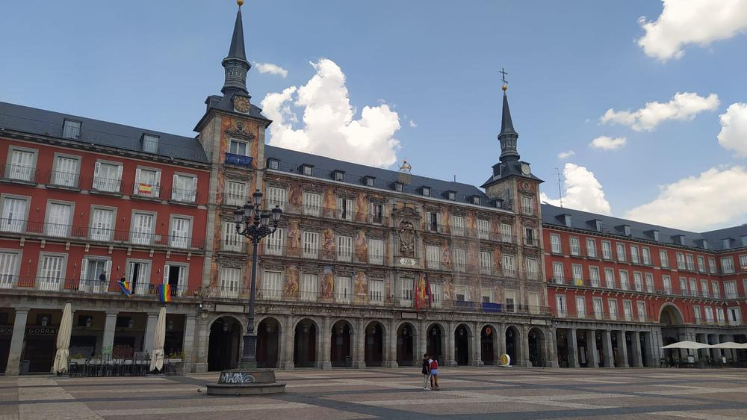 Ernest Hemingway once wrote in A Moveable Feast that his reward for a day’s worth of writing was to walk the streets of Paris, to replenish his imagination and reconnect with the outer world. I carry his mindset with me as I pace the vibrant streets of Madrid, the spirit of which translates into the intellectual vigour of its bookshops. Channelling your inner flâneuse gets you far.

I´ve always thought that walking was the best way to find that which you didn´t know you needed—often in the very moment you need it most. This is how I came to know the bookshops in Madrid that mean something to me—by a peripatetic wandering. 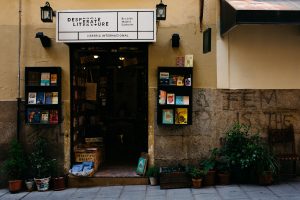 Situated at just an eight-minute walk from Plaza Mayor on one side, and a six-minute walk from the Royal Palace on the other, Desperate Literature, at Calle Campomanes 13, takes its name from a passage in Roberto Bolaño’s book, The Savage Detectives:

I like to think of Desperate Literature as a transitional space between street and home. As told to me for a previous piece on the bookshop, co-owners Terry Craven and Charlotte Delattre see this space as completely fluid. ‘There’s little distinction between our private life and public life. It’s how we live and what we live for,’ Delattre says. ‘A very nice version of how we live.’

The pair met while working at Shakespeare & Company, Paris, and their Madrid bookshop embodies the motto of the former: ‘Be Not Inhospitable to Strangers Lest They Be Angels in Disguise.’ It´s not uncommon to be offered a cup of tea if you hang around the shop long enough. And there are other cosy quirks. In the ‘Boozy Books’ section, the purchase of a book earns you a shot of whiskey. When you dial a number on the shop’s dial-up telephone, a random poem is read to you.

Not only does the bookshop carry titles in English, Spanish and French, but it also plays host to poets, musicians and writers around the city, the country and the world. Crowds often spill out onto the street during events like the Woolf Pack (monthly readings where ‘the mic is exclusively open to womxn (cis and trans) and LGBTQI+ identifying folk’). And just last year, Desperate Literature organised Madrid´s first Anglophone literary festival, in which over 80 poets and academics gathered to read their work. 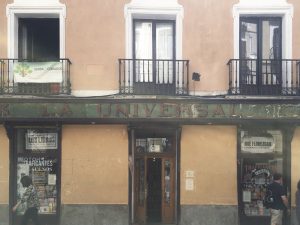 While the COVID-19 pandemic has changed the fabric of literary gatherings everywhere, the shop continues to put on virtual events, to great success. Other shops like Traficantes de Sueños, at Calle Duque de Alba 13, are doing the same. Just a fifteen-minute stroll from Desperate Literature, Traficantes curates a selection of books in the categories of ecology, feminism, philosophy, history, economics, social movements, literature and psychology. Its most recent event, livestreamed on the shop’s YouTube channel, was on the theme ‘Narrative and Historical Memory’.

With its close proximity to the neighbourhood Lavapies, a zone made rich by its multiculturalism, Traficantes de Sueños places readers at a multitude of intersections. Many of the books in the shop are also academic in nature, challenging readers to engage with specialised content in ways they might not otherwise. The shop tries to connect readers to a series of different worlds and realities, which serve as tools in the formation of critical thought. 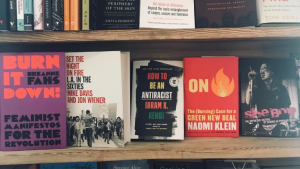 Booksellers here call themselves ‘agitadores político-culturales’ (political-cultural agitators), who aim to spark debate and activism, rather than simply sell books as objects of consumption. The general philosophy of the shop lies in the creation of a space for cultural diffusion directly tied to books and to the social function of the bookshop as a place of expression and citizen encounter. It is a place that inspires you to ask questions; it even encourages you to question the questions you are asking.

Those who enjoy intellectual challenges and consider themselves to be lifelong learners, or aspire to be, will feel equally at home in Pasajes: Librería Internacional, a half-hour walk from Traficantes, towards Plaza de Colón. For visitors who love languages, this bookshop, at Calle de Génova 3, is a treasure trove. The Financial Times named it one of the five best multilingual bookshops in the world. With a catalogue of both fiction and non-fiction books in English, French, German, Spanish, Portuguese, Russian, Japanese, Arabic, Hebrew and Turkish, amongst others, their collection of books for learning languages is the best in the city and perhaps the country. 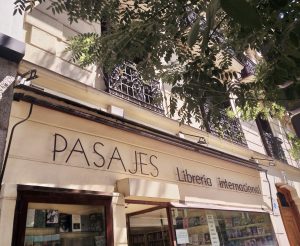 In a city with an international population, the books complement the ever-popular intercambio (a language exchange between individuals or groups) in the exploration of other cultures made accessible through language. The bookshop even connects language learners to a variety of linguistic institutes scattered across the city. And if your passion is translation, that art of precise linguistic negotiation, this bookshop will serve you well. You are likely to find the same book in multiple languages—variations on a single theme, in musical terms—which facilitates the transmission of learning across borders. Like the other bookshops featured here, Pasajes produces its own literature through an in-house editorial imprint. An added dimension of these booksellers’ commitment and contribution to the written word.

When you traverse Madrid by foot, it’s likely you´ll walk into many worlds far beyond the reaches of the city limits. From Besa y Lee (Kiss and Read), a hip bookshop in Malasaña that takes its name from the double entendre of ‘lengua’ (meaning language and tongue), to the majestic Librería Miguel Miranda (est. 1949) in Barrio Las Letras dedicated to antique, out-of-print books, Madrid has something for everyone.

‘We are the sellers of printed thought,’ says Miguel Miranda, the shop’s owner, who took over from his father in 1972. He remembers those days in which secret meetings would take place in the bookshop, where people heard about things that would have been censored by the press. Booksellers like Miranda remain firm believers in the spiritual enrichment that spaces like these provide.

Words invite readers to participate in the creation of aesthetic moments, each of which is authentic and singular like a walk. As Rebecca Solnit writes in Wanderlust: A History of Walking: ‘Exploring the world is one of the best ways of exploring the mind and walking travels both terrains.’ So do books.

Note: This bookshop guide gives the views of the author, and not the position of the LSE Review of Books blog, or of the London School of Economics. Thank you to Katy Dycus for providing images and to Jacob Click for giving permission to use the photograph of Desperate Literature.

Image Two and Three Credit: Photograph of Traficantes de Sueños and bookshelf in the bookshop, taken by Katy Dycus.

Do you have a favourite bookshop? If there’s a bookshop that you think other students and academics should visit, then this is your chance to tell us all about it.

Bookshops could be academic, alternative, multilingual, hobby-based, secret or underground institutions, secondhand outlets or connected to a university. We’d like to cover all world regions too and are particularly keen to feature cities outside of Europe and North America.

Katy Dycus is a staff writer for an anthropology research journal. Originally from North Texas, Katy now works in Madrid. 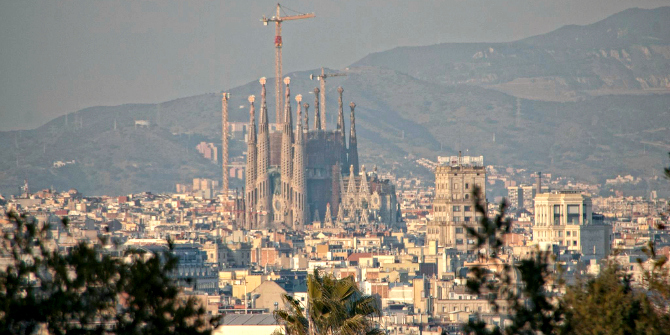 The best bookshops in Barcelona