In Ecocide: Kill the Corporation Before it Kills Us, David Whyte argues that corporations are a critical yet neglected cause of our global environmental crisis. Accessibly written with excellent examples and case studies of modern business conduct, this bold book will be a valuable addition to reading lists, particularly for those studying political economy and business, recommends Atul K. Shah.

Ecocide: Kill the Corporation Before it Kills Us. David Whyte. Manchester University Press. 2020. 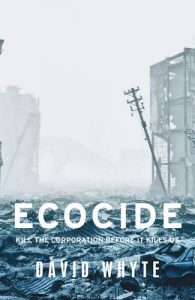 To save nature, we need to reform the corporation

Multinational corporations are newly created ‘countries’ of the world, with turnover higher than the Gross National Product (GNP) of many countries put together – examples being Google, Facebook, Shell or Monsanto. Unlike countries, however, their responsibility and accountability to society are weak at best, and virtually non-existent when it comes to nature – our Planet Earth. Ecocide, a new book by David Whyte, Professor of Socio-Legal Studies at the University of Liverpool, argues that corporations are a critical yet neglected cause of our global environmental crisis. The problems they create are wired into their DNA of shareholder primacy and profit or wealth maximisation – a phenomenon now acknowledged widely as financialisation. Furthermore, the corporate veil of limited liability and responsibility, and their concentration of political and structural power, enables corporations to shop between jurisdictions, playing a game of tax, offshore secrecy and regulatory arbitrage to evade environmental responsibility.

Ecocide has four chapters and is 200 pages long, including notes and references. The first chapter explains the nature and history of the corporation, going into the detail of its legal construction as a ‘fictional’ person, with rights to acquire assets and resources like employees or land and to borrow money in capital and debt markets. Business education all over the world focuses primarily on the science of these giant corporations, but often fails to unlock this legal DNA, which makes corporations’ undemocratic license to exploit and expropriate hugely problematic. The first ever corporation in the world was born in Sweden in 1288 and was called Stora Kopparberg. It was established by German merchants to collectively invest in a copper mine in the town of Falun. It still exists today as Stora Enso – from mining, it has morphed into the second largest paper producer in the world. You can imagine the environmental footprint of this historic heritage corporation.

Chapters Two and Three explore the twin dilemmas of capitalism and regulation – whilst capital has a desire to keep on growing exponentially, regulation designed to curb its excesses keeps on failing. For Whyte, the corporation has become a key front for neo-colonialism and has replaced forced conquest with a more subtle form of exploitation disguised under the rhetoric of free markets, economies of scale and efficiency. Bribery and corruption are endemic to corporate operations not just in the so-called resource-rich Global South, but also in the Global North where political influence and capture are seen as key methods of business operations. Regulation designed to make corporations more responsible and accountable consistently fails due to its poor construction, its enabling role in encouraging environmental exploitation and its weak enforcement and policing. Shopping for the lowest-cost regulation in a world where countries are often desperate to attract the investment of multinationals is easy, and our one and only planet suffers from this abuse as its environment respects no borders.

The final chapter is entitled ‘Kill the Corporation Before it Kills Us’, mirroring the subtitle of the book. Whyte makes a bold attempt here to propose different ways of controlling the corporation to limit its environmental impacts. Earlier in the book, he notes how the major United Nations environmental treaties make little reference to controlling and regulating the corporation, even though it is one of the major culprits of environmental harm. Reform suggestions include an International Criminal Court for corporate executives who commit ‘ecocide’ and an ending of the impunity from prosecution for shareholders and investors. The corporate veil should be allowed to be opened and limited liability withdrawn from corporations that consistently break environmental rules and principles.

I would place this book in the field of study known as Corporate Governance, which is primarily studied in business schools and largely avoided by politics and economics departments even though it is central to their education curricula. It is an interdisciplinary field, and Whyte collates history, politics, law, economics, sociology and biology in his analysis. One of the earliest pioneering books in this vein was The Corporation – The Pathological Pursuit of Profits and Power by Joel Bakan (2002), who also produced an award-winning documentary of the same name, which I still use to teach my students.

In a world of specialisation and pressure to publish in top highly ranked journals, I salute academics who take the risk of writing a book and reaching a much wider audience than the few who can understand academic jargon within a narrow domain. This book will have a good audience among the Extinction Rebellion movement, who may not understand the DNA of business but still feel the effects of its monopoly and expropriation of nature. It can help guide their protests and reform policies, as it is clear that corporations are at the centre of the ecological plunder we see today in the world. Ecocide is also written in an accessible way for both undergraduates and postgraduates who study political economy and business – it has excellent examples and case studies of modern business conduct. It is short, concise and easy to understand and follow, with excellent notes and references. I certainly will be putting it on my reading list.

And now for the critique. The book points to a significant ontological crack in our social sciences, where nature has been ‘othered’ and treated as an unlimited resource to be used and dumped upon; only now do we learn about its limitations and experience its revenge. Like the fiction we call money, the social construction of the corporation and its subsequent devastation of society and nature also point to a deep cultural flaw in modernity – the focus on materialism, individualism and endless pursuit of sensual desires and personal ‘happiness’. This culture is not the only mindset in the world – many timeless communities have lived along different values and beliefs, including the Dharmic traditions of India, whose very basis was respect for nature and all living beings. For these cultures, interdependence was a law of nature which was translated into their myths and behaviours. Humans, animals and plants are beings endowed with consciousness which need to be respected and nurtured and not destroyed or cannibalised. My own research on the Jains shows that these cultures and communities are still alive and vibrant all over the world, and continue to live with a low environmental footprint, including in the practice of business, where they have a long record of sustained success. Alongside the regulatory reform of the corporation, we should not shy away from confronting our cultural flaws. We should see the mind, body and spirit as one whole, and respect the ethereal essence, consciousness and inter-generational responsibility of sustainable living.

Professor Atul K. Shah teaches at City, University of London and is author of ‘Jainism and Ethical Finance’ (with Aidan Rankin) and is currently developing a new ‘Organic Theory of Finance’, where culture and ethics are made central to the quest for sustainability.