In The Good Girls: An Ordinary Killing, Sonia Faleiro investigates the shocking deaths of two teenage girls in the North Indian state of Uttar Pradesh, allowing the reader to walk beside her as she gradually uncovers the relationships, institutions and political landscapes that shaped Padma and Lalli’s lives and final days. Offering a window into the cultural, emotional and political life of modern India, Faleiro inspires in her ability to combine meticulous research, sharp and nuanced analysis, a sensitive and empathetic authorial voice and a riveting narrative style, finds Sandhya Fuchs. 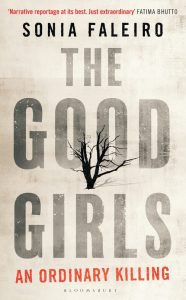 One night, in May 2014, two teenage girls disappear in Katra village in the North Indian state of Uttar Pradesh. The next day they are discovered in an orchard, hanging from a mango tree, their shoes neatly arranged against the trunk. The girls are (pseudonymously) called Padma and Lalli: cousins, and friends so inseparable that villagers used to refer to them as one person, ‘Padmalalli’. As the alarming image of the girls’ dangling bodies travels across Indian social media, their families seek answers and justice: was it murder? Or was it suicide? Did sexual assault take place? But most of all, will there be justice?

Padma and Lalli’s fate is shocking. Yet, as local journalists point out, it is also tragically ordinary. In 2014, the state of Uttar Pradesh accounted for 16 per cent of all abduction and kidnapping crimes in India. Women, in particular, continue to fear for their safety. Just one year prior to Padma and Lalli’s deaths, a young woman in nearby Delhi had been gang raped and tortured by six men. The Nirbhaya case (meaning ‘fearless’ in Hindi), as it became known, had resulted in the ‘largest demonstrations in recent Indian history’ and the strengthening of national rape laws.

Protests, India had learned, were crucial if you wanted change and restitution. And so, Padma and Lalli’s bodies, gently jostling each other in the soft summer breeze, become a symbol for the fears that dominate everyday life in North India, and for the social and political transformation that can no longer remain a mere promise. Sitting in the blazing sunshine guarding the corpses of their daughters, the villagers of Katra refuse to let the girls be taken down. They sit and wait for the powerful to arrive and to deliver on their promises of protection and justice. As media and police begin to descend on Katra village, Padma and Lalli’s grieving families have to navigate a treacherous terrain of honour, law and caste.

A former journalist and established writer of narrative non-fiction, Sonia Faleiro tells Padma and Lalli’s story in the style of a crime narrative in her new book, The Good Girls. Faleiro allows the reader to walk beside her as she gradually uncovers the relationships, institutions and political landscapes that shaped Padma and Lalli’s lives and final days. Discovering the village of Katra alongside Faleiro, the reader witnesses the criminal investigation unfold. Faleiro impressively combines the emotive and personal power of narrative writing with sharp and nuanced historical, demographic and sociological analysis, which is skillfully and subtly woven through her account. Through Faleiro’s sensitive authorial voice, the death of the two girls becomes a window into the cultural, emotional and political life of modern India.

The Good Girls unveils the events and circumstances of Padma and Lalli’s last days against the backdrop of the political and cultural life of modern Uttar Pradesh, India’s most populous state. Politically significant, yet plagued by high rates of poverty and corruption, Uttar Pradesh was identified as one of India’s most dangerous states for women in 2020. Tracing Padma and Lalli’s story, Faleiro shows the reader how concerns about gender and honour remain interwoven with the persistent structures of caste inequality in the state. Padma and Lalli’s families belong to the low-caste Shakya community, which the Indian government has classified as economically backward. Still primarily perceived and judged through the prism of their low-caste status, which permeates the criminological and social response to the girls’ deaths, the Shakya family desperately tries to engage legal institutions to restore the honour of their daughters.

Faleiro powerfully illuminates how deep-seated patriarchal and casteist attitudes collide with a non-transparent and overstretched Indian legal system to make distinctions between fact and fiction, truth and lie, almost impossible. As key witnesses repeatedly change their story and phones disappear, the Shakya family’s concern about their own lack of social capital and credibility leads to a series of convoluted and, sometimes, contradictory statements and accusations.

Nothing seems to add up. Did Pappu, a boy from the neighbouring village, whose family belongs to the politically powerful Yadav caste, rape and abduct the girls? And were the local police officers involved in the kidnapping? Padma and Lalli’s families seem convinced that ‘Pappu took the girls’. Yet, a special investigation team finds inconsistencies in this version of events. The families themselves gradually arouse suspicion. Did the girls have sexual relations with Pappu? And if they did, could the families have killed the girls themselves to protect the family honour? After all, when Lalli’s father was asked what he would have done to the girls if he had found them, he answered, ‘We would have killed them.’

In the end, many of these questions remain unanswered. Faleiro herself does not venture a guess; she does not try to steer the reader’s opinion. Likely, because the truth of that night is still elusive, and because the social stakes remain high.

As the years go by, village life slowly seems to go back to normal: new children are born, people age or move away and governments change. Still, it is clear that Padma and Lalli’s shadows still hang over Katra village. When asked how she is doing, Lalli’s mother says, ‘I am how I am.’ But she has lost much of her will to fight. The daughters of Katra perhaps feel Padma and Lalli’s legacies most intimately: they are more closely surveilled than ever before; going to fairs or owning phones is out of the question. If the girls’ deaths taught the villagers anything, it is that daughters have to be closely monitored and guarded for their own sake, and also for that of the family.

If systemic issues of caste and gender inequality are the driving forces behind Faleiro’s narrative, the Indian legal system is one of the story’s main protagonists. Through meticulous documentary research, extensive interviews and participant observation, the author reconstructs the post-mortem investigation and the criminal investigation that followed Padma and Lalli’s deaths. Bringing to life the voices of doctors, police officers and special investigators, Faleiro ultimately paints a nuanced ethnographic picture of India’s legal landscape. She exposes how publicly invisible cultural and social concerns steer the engagement of lower caste and economically disadvantaged communities with the law.

As an anthropologist who has spent the better part of five years researching the interactions between caste, law and violence in North India, I found that Faleiro’s ability to combine meticulous research and sensitive cultural analysis, alongside a riveting narrative style, was inspiring. She builds suspense without ever allowing the reader to lose sight of the fact that what happened to Padma and Lalli is not hypothetical or mere fiction. Faleiro portrays complex characters without passing judgement, and she leads the reader to understand and empathise without explicit instruction. If the summaries of political developments or social landscapes seem a little too squeezed or streamlined, this does nothing to reduce the overall power of Faleiro’s storytelling.

Through my extensive research into caste atrocities against Dalit (ex-untouchable) women in North India, I found the way Faleiro tells Padma and Lalli’s story all too familiar. I have known girls like Padma and Lalli myself: after all, their deaths were all too ordinary.

Dr Sandhya Fuchs's research explores the relationship between law, experiences of violence and hate, and social imaginaries of hope, justice and truth. Located at the intersection of anthropology and critical legal studies, her work analyses the potential of antidiscrimination and hate crime legislation to address structural inequalities and counteract culturally specific forms of prejudice and oppression. Sandhya currently works as a Research Associate and Lecturer at the University of Bern in Switzerland, where she teaches her course entitled 'Injuries on the Margins: Hate Crimes, Recognition and Legal Remedies'. She completed her PhD, which examined the social life of India’s ambitious Prevention of Atrocities Act, in Social Anthropology at the London School of Economics and Political Science (LSE) in 2020, where she was also affiliated with the International Inequalities Institute (III). She remains a Visiting Fellow at LSE.