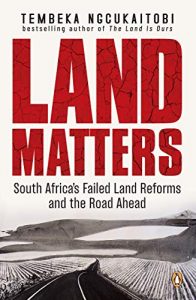 Many suggest that Africans should no longer ‘blame’ colonialism and neocolonialism for their problems. Yet, in Land Matters, Tembeka Ngcukaitobi demonstrates the enduring importance of colonial and apartheid land tenure in shaping persistent inequality and social stratification in South Africa.

Mainstream economists reduce land reform to title registration for security of tenure. Typically, development analysts also focus their empirical work on showing the limitations of this ideology. In Land Matters, however, we learn that the issues with land reform are much deeper and much bigger. Title registration merely seeks to paper over the cracks of existential institutional inequities.

Well-researched and highly insightful, Land Matters could have given a bit more attention to the position of the Economic Freedom Fighters because of the focus they give to land as a political movement. Additionally, the book could have considered the economics of land rent and value creation, as recently developed in books such as #We Are Rent, because this would complement the analysis of physical land redistribution, the staple of versions of Marxian political economy of land. The book could also have engaged other theoretical propositions, including those in Georgist political economy, that concern how else to redistribute landed property beyond physical land redistribution.

Yet, overall, Land Matters is outstanding. Three of its features are particularly distinctive. The book’s palette of rich statistics that shows the shocking landed inequalities in South Africa leads the way. The book’s engaging analysis of the age-old question about compulsory acquisition of land with or without compensation complements the picture. Showing how institutions shape society, how societies shape institutions and in what ways the land question contributes to explaining persistent inequalities and social stratification in South Africa cements the book’s position as an authoritative account of South Africa’s land economy. 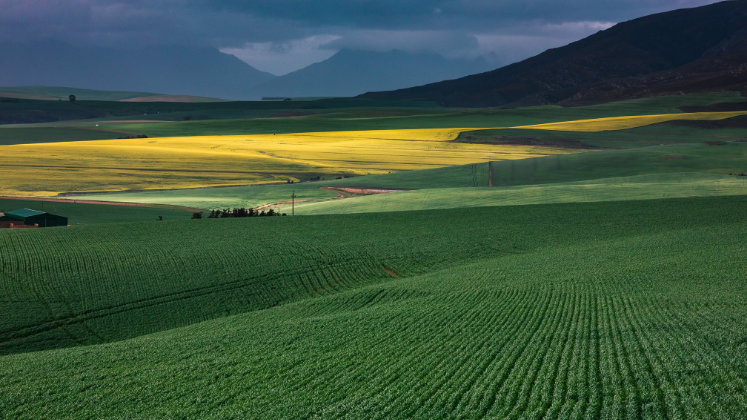 Photo by Charl Folscher on Unsplash

These features are honed around seven key arguments and fifteen excellent chapters. Chapter One, appropriately entitled ‘The Crime of Apartheid’, offers four critical insights. First, apartheid was a crime calculated and meted out by the state against humanity. Second, apartheid was rejected by the United Nations and international law. Yet, Black South Africans, disproportionately the victims of apartheid, have never been beneficiaries of reparations, not for land lost, not for free and slave labour, not from states and not from companies. Fourth, reparations are necessary, but the terms cannot be dictated by the beneficiaries nor should reparations be equated with charity or foreign aid.

Chapter Two takes the argument a step further. A dizzying amount of historical evidence is presented to show how land dispossession led to forced labour and forced Africans to accept slave wages, especially in the mines. White businesses and business owners gained from Black slave labour, yet they have not paid reparations. In short, South African capitalism was greatly driven by apartheid, but racism and dispossession started long before apartheid, which was officially institutionalised in 1948, while South Africa was officially born in 1910 (21).

In Chapter Three, the book examines the idea of colonialism, arguing that it was centrally about institutionalising racial superiority. That mistaken sense of superiority shaped colonial land law, which was invented by distorting African land laws to transfer African land to the colonists. However, the dispossession was not only limited to land. It extended to labour and wealth.

Dispossession of cattle, the focus of Chapter Four, was similarly widespread and brutal. The approach was – again – centred on violence against Black people. Cheating and trickery were additional instruments. Dutch companies extracted substantial profits from the people of Khoikoi, for example, through these tactics. This ‘model’ provided guidance for other companies. The ‘natives’, a largely welcoming people who showed humanity, kindness and fairness to the intruders, were taken for granted, deceived and forced to become tenants on their own land and beggars when they had previously been better off.

Going deeper into colonial mindsets, institutions and their continuing influence on modern South Africa, the book probes ‘Property and Franchise’ in Chapter Six. Here, we learn that John Locke was central to sowing the seeds of private property in South Africa. Locke, of course, had an official position in the colonial administration of the British empire and was also adviser to the British East India Company. His influence on promoting the notion of private property was enduring. Both the colonial and apartheid states linked the right to vote to private ownership of land, following the broad strokes of Lockian thought. As Africans were deemed not to have private property and many of them lost their land by force and trickery, they could not vote in South Africa. Accordingly, independence leaders became obsessed with the idea of private property in land.

Therein lies the trouble of ‘Private Property and Liberation’, investigated in Chapter Seven. In South Africa, White people took Black people’s land and insisted that, for Black people to get back the land, they must compensate White people. The African National Congress (ANC) wanted to end racialised land ownership, but not private ownership. While it advocated expropriation, it wanted to pay White people, albeit without using the willing buyer/willing seller principle by which compensation is estimated based on the principles of open market value, which is centred on the notion of arm’s length transactions.

In general, as argued in Chapter Eight using ‘The Settlement of the 1990s’ as a case study, the principles of land reform in South Africa were categorical. Post-apartheid land reform focused on land acquisition, land restitution and land redistribution (to give land to those who cannot afford to buy it). The book critiques the Freedom Charter and the Interim Constitution for failing to clarify these processes and also for taking contradictory positions: for example, claiming to uphold the security of private property and still toying with the idea of land redistribution. This chapter shows that the final constitution appears to have resolved the problems of these contradictions, especially those related to expropriation for redistribution, limiting public acquisition only to the government purpose of providing infrastructure without redistribution and trying to offer land reform through free markets.

Chapter Nine zeros in on restitution. Comprehensive data shows that restitution has been slow. The chapter examines the reasons for this failure. Some claim that restitution has been slow because the institutions responsible are under-resourced. This is disputed because those institutions recurrently underspend their budgets. Implementation and capacity problems as well as corruption are additional reasons as well as design problems in the laws and policies for restitution. In spite of this, the chapter argues that the vision of restitution remains viable and powerful.

Still, as Chapter Ten shows, many proposals for realising restitution are highly problematic. The willing buyer/willing seller model leads the way. Its neoliberal origins in the World Bank are demonstrated, as are its failings in three respects. First, the land available for redistribution is determined by landowners. Second, landowners use limited means of sale: auctions, direct transacting and open sales. Third, landowners also control the price as oligopolies. The result is shocking: spatial inequalities, poor rural, urban and regional distribution of land (122, 129). Gendered redistribution is also poor (129). So, overall, the willing buyer/willing seller model has failed, showing itself to be quite racist and patriarchal (130).

If the market is fundamentally flawed, is the state any better? This question is not really answered in Chapter Eleven, which points to both the limitations of private property and yet the continuing emphasis on formal title registration and bank credits. This leads to informalisation and the racialised system of the built environment. Chapter Twelve on ‘Women’s Rights to Land’ demonstrates how women continue to be marginalised in terms of land distribution. Chapter Thirteen gives a detailed discussion of context-specific conditions to determine whether compensation should be paid. Its argument relates to the need to emphasise broad, just compensation rather than market value-based compensation.

Perhaps the aspect of this book that can most strongly bring land back into the financialisation debate is Chapter Fourteen, ‘Expropriation and the Banks’. The argument against expropriation without compensation is complex. It includes the fear that the banking and mortgage system will be put into permanent crisis. Should mortgaged property be confiscated; could they still be asked to amortise the loan? Would it be just to expropriate land and housing? At the same time, the banks are not innocent. They have benefited from apartheid and from the mortgage system. This chapter seeks answers to this conundrum. Should the state pay the balance of the mortgage, while the mortgager is left in the cold? The book objects (197) because it will not be just, but also thinks the argument that the bank will be destroyed because of expropriation of mortgages is exaggerated. It seems to prefer a forward-looking, case-by-case, balance-of-risk approach to the bank and expropriation issue (198-99).

Finally, the book turns to the question, ‘Is the Constitutional Amendment [widely advocated in South Africa] a panacea?’, in Chapter Fifteen. Could constitutional amendments resolve past problems? The judiciary itself posed some of the ANC proposals (for example, negative statements on the right to private property). The post-apartheid constitutional experience is that market-based interpretations have corrupted the constitution. Against this background, the call to amend the constitution, including Article 25 on property, is weak. The problem is that the country and the judiciary generally have taken a rightwards turn towards markets. Other amendments might have some promise: the draft appropriation bill, returning to the question of expropriation without compensation, is provided and approved to imagine even bolder steps.

Finally, the book concludes by stating the three tests for land reform, summarising the author’s evaluation of South Africa against these tests and explaining the reasons for the results. Land reform is successful if it corrects past wrongs, confronts present inequalities and constructs an inclusive future. South African land reform has failed to meet these tests. The reasons vary from weak institutions to the multiplicity of proposals, design problems in the law and wider social forces. Still, if we look at the arguments stated in the introduction, it seems that it may be better late than never. This shifts attention from ‘The Future of Land Reform’, the chapter’s title and the book’s concluding chapter, to a future for land reform beyond what currently pertains in development studies.

This book carefully shows not just why but also how land matters. Both in creating and constructing the present problems of South Africa, land has been central to its story. As the book shows, land will also be vital in solving these problems. Combining an excellent exposition of land law, historical research and social science investigations, Land Matters casts the problems and prospects of South Africa in a new light.

Author acknowledgement: For excellent suggestions, I gratefully acknowledge, but in no way implicate, Dr Rosemary Deller, Managing Editor of LSE Review of Books.

Franklin Obeng-Odoom is Associate Professor in the Discipline of Global Development Studies at the University of Helsinki and the Helsinki Institute of Sustainability Science. He is also the author of The Commons in an Age of Uncertainty: Decolonizing Nature, Economy, and Society (University of Toronto Press, 2021). He can be contacted on franklin.obeng-odoom@helsinki.fi