Book Review: You Have Not Yet Been Defeated by Alaa Abd el-Fattah

Book Review: You Have Not Yet Been Defeated by Alaa Abd el-Fattah

You Have Not Yet Been Defeated brings together the articles, interviews, poems and notes of Alaa Abd el-Fattah, the jailed activist who is one of Egypt’s most prominent political dissidents and human rights defenders. With much of the contents smuggled out of prison during Abd el-Fattah’s periods of detainment since 2006, this collection gives a global audience an opening to draw connections between a localised experience of mass incarceration and other struggles against militarised policing and carceral regimes around the world.

You Have Not Yet Been Defeated. Alaa Abd el-Fattah (translated by a collective). Fitzcarraldo Editions. 2021. 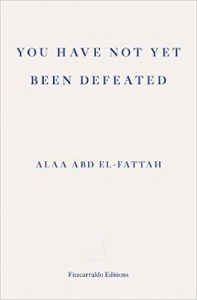 ‘Everybody knows there is no hope for us who have gone ahead into prison except you who will surely follow. So what are you going to do about it?’ (221).

You Have Not Yet Been Defeated is a collection of selected works by Alaa Abd el-Fattah, one of Egypt’s most prominent political dissidents and human rights defenders. Known for his activism during the Egyptian revolution that toppled the Hosni Mubarak regime in 2011, Alaa has been under the spotlight since for speaking up against government crackdowns, due process violations and the corruption embedded within the country’s counter-revolutionary establishment. He was detained under each regime since Mubarak in 2006 and was sentenced in December 2021 to five years in prison for spreading ‘false news’.

It’s within this critical context that You Have Not Yet Been Defeated was put together anonymously, by dozens of people who collected Alaa’s writings, including published articles, public interviews, poems and notes that were smuggled out of prison. His Arabic writings were all translated into English, and the book appears to call for the international readership’s attention in particular. It follows the sequential order of developments in Egypt, from 2011 to 2020, and is an especially significant contribution given the extreme levels of media and digital censorship in Egypt as well as the considerable risks Alaa’s family and circles have taken to publish and circulate his works.

You Have Not Yet Been Defeated captures the volatile circumstances and writing conditions that Alaa has been going through over the past decade: from long stretches of confinement in a prison cell to fleeting experiences of release back into a life, the ‘normality’ of which he questions and speaks up against. One moment Alaa is at the 2011 RightsCon summit in Silicon Valley, delivering a keynote address on the dangers of communication monopolies on human rights (76), and the next he is behind Egyptian prison walls and deprived of meaningful human contact. 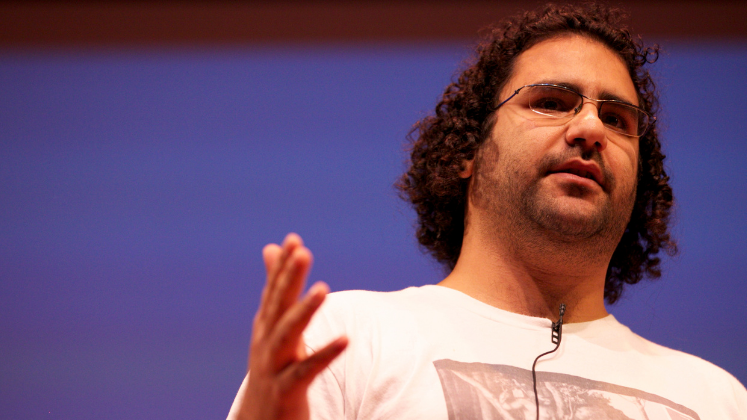 The book therefore reads as a collection of important appearances Alaa makes, taking the reader on a chronological journey through a spectrum of sentiments and reflections that characterised the Egyptian revolutionary moment and its aftermath. Despite changes in relative freedom and writing conditions, he maintains a principled commitment to speaking up against the forces responsible for his imprisonment and the fate of many Egyptians like him. Alaa describes in granular detail haunting memories of the revolution and experiences of the increasing authoritarianism that followed. In what reads as unfiltered reflections, he retrospectively thinks along with the reader, vulnerably sharing doubts, challenges and lessons learned from the past. Alaa is often vocal about his own analytical limitations and uncertainties, going beyond sanitised narratives that ‘over-inflate the movement’s power’ (41). He assesses the revolution’s failures, while stressing the potential of thinking from a place of defeat to give meaning to what happened; ‘we have not yet perished, and meaning has not yet been killed’ (309).

Alaa rejects delusions of individual grandeur and assumes ‘shared comradely intelligence’ (54). His writing style embodies an ethic of collective, relational thinking that places the reader as an engaged member of a conversation. He reminds his readership that they do not need to perform as bearers of knowledge in order to mobilise for better futures. In fact, Alaa highlights the collective value in being teachable: ‘maybe if we listened to the fishermen on our lakes and heard their complaints about the destruction of fisheries by multinational corporations, we’d discover how urgent the issue is […] maybe we need to give the people of Burullus, who have long fought for potable water, a chance to educate us about what it means to be denied fresh water’ (64).

The book demystifies Egypt’s obscure carceral archipelago and justice system. It recounts details of daily life in a prison lifeworld that is hidden from public eye, illustrated through interactions with security guards, conversations with cellmates and family visits. Alaa’s writings elaborate on the military establishment’s abuses of power and its continued encroachment on all aspects of public life. Some pieces recount the absurdities of the institutional and bureaucratic procedures that are worsening in Egypt, including indefinite pretrial detentions, upheld ‘hidden rules’, unconstitutional norms and practices, and national myths about state functions, such as the presumed independence of the courts (219). Alaa does not point to such features as exceptions nor as isolated examples of state dysfunction, but rather as keystone dimensions of a corrupt system that everyone knows about and that the revolution sought to dismantle (218).

Alaa exposes how the country’s security apparatus is engineered to destroy hope and imagination. He describes solitary prison conditions and the struggle to sustain life when he literally cannot think ‘outside the box’. The book outlines how the state continues to put the country’s youth behind bars, quashing potential for progressive social change. It taps into a shared, collective grief over systematic, mass incarceration, and it draws attention to what is occurring in real time to Alaa and many others like him, who are not afforded due process nor any access to fair and transparent legal mechanisms.

Though You Have Not Yet Been Defeated is mainly about Egypt, it is rooted in an internationalist vision. It highlights how, at the core, the Egyptian revolution stood for something greater than nationalist aspirations, finding universal appeal in the calls for freedom and justice for all people. The book speaks to political realities that resonate beyond the country’s borders, and is timely considering the prevalence of enforced disappearances, torture and arbitrary detention across the region. For example, Alaa shares lessons from his visit to Gaza, where he witnessed Palestinian steadfastness and learnt from its culture of martyrdom more closely: ‘Gaza stands fearlessly, calling out to us: come, for I have the truth, people who love life and desire freedom. Come, for I have the last wall: if it falls, so will every wall and every warden and every jailer in Egypt as in Syria’ (118).

Indeed, Alaa draws on various sources of inspiration from different contexts to learn from how they fought against the same structures of power that affect Egypt, even if in varying ways. In thinking about who will write the constitution following the ousting of Mubarak in 2011, he looks at South Africa’s experience in drafting the Freedom Charter (59) and the importance of including the ‘revolutionary masses’ in this collective project (64). He also looks up to the Occupy movement and its calls for a global restructuring.

Alaa goes beyond the boundaries of the nation state to explain how international political economy affects the living conditions of different classes within Egyptian society: for instance, how it shapes agribusiness and the conditions of small farmers who were long left outside dominant ‘Arab Spring’ discourses. More broadly, much of his analysis challenges hegemonic Western discourses that detach revolutions across the region from the broader global context, instead treating them as distinct phenomena. Alaa defies this insular politics reflected in the framing adopted by Western political pundits and mainstream culture that attempts to make sense of political developments in Egypt.

Ultimately, You Have Not Yet Been Defeated is a call for action. Alaa writes with an unflinching political urgency, addressing the reader directly to ask what they are doing to rise against injustice. To him, the activist is not a spectacular cult figure or gatekeeper, but rather the average person that uses their agency and influence to organise within their respective contexts. He reminds each person living outside prison walls that they have an important role in the fight to make the world a more just and compassionate place. Indeed, Alaa demonstrates how regressive social changes do not happen overnight. He cautions against slipping into complicity, disengaging from the struggle and feeding into manufactured silence. In this context, the book highlights how important it is to not take for granted the freedom ‘to go out and challenge the authorities’ (220).

While Alaa speaks at great length about the sense of collective defeat in Egypt, he makes an important case to use it as an example to draw meaning from; to allow defeat to serve as a generative space for solidarity; to share lessons, foster connections and renew possibilities to create alternative futures (309). The book highlights the interdependence and connectedness between struggles for freedom across the world, making clear that the most effective way that those who have not yet been defeated can help Egypt is by ‘fixing their own democracy’ (312). Considering the growing momentum to strengthen global movements and solidarity campaigns against systemic oppression, Alaa’s interventions give a global audience an opening to draw connections between a localised experience of mass incarceration and other struggles against militarised policing and carceral regimes across different geographies.

Posted In: Africa and the Middle East | Law and Human Rights | Politics 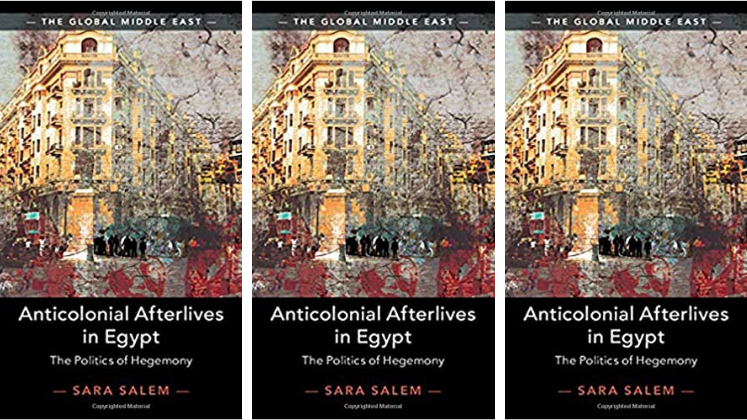 Book Review: Anticolonial Afterlives in Egypt: The Politics of Hegemony by Sara Salem