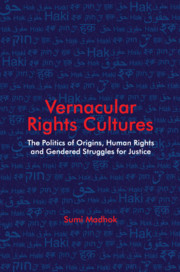 In much public discourse, human rights are presented as values of ‘inherent universality’ that originated in the West and have since radiated outwards to ‘the rest of the world’. Sumi Madhok’s Vernacular Rights Cultures is a marvellous challenge to these all-too-familiar narratives on the unilateral direction of travel of human rights and their originary tale in the West.

Madhok’s book is part of a recent trend in the international legal literature of countering ‘triumphalist’ narratives of a unilateral, linear and progressive vision of human rights and international law (see, for example, Ratna Kapur 2018). But Madhok goes further than recent critiques. Her book is the result of extensive ethnographic research in South Asia and takes to task an impressive range of theoretical literature.

Vernacular Rights Cultures places human rights in the context of rights struggles and subaltern mobilisations, especially among women, in India and Pakistan. The book traces the ambivalent relationships of subaltern struggles with the state, international human rights law and gendered power relations. The latter, while often sidelined in the literature, is placed at the centre of rights struggles.

Madhok is committed to a ‘sociologically aware’ (15) analysis of power relations underlying the multiple lives of human rights and political subjectification. For the author, human rights, and rights more broadly, are not simply elaborated and adjudicated at the national and institutional levels. They have lives of their own with intricate trajectories as they are adopted, modified, unmade, hybridised, remade and deployed for struggles by subaltern groups. These processes are not simple acts of translation and localisation (12). Instead, rights discourses are generative substances that create and redefine political subjectivities and imaginaries. Human rights, in turn, are also redefined as they are taken out of the hands of liberal, market-oriented institutions (3) and re-made into political potentialities for subaltern groups. 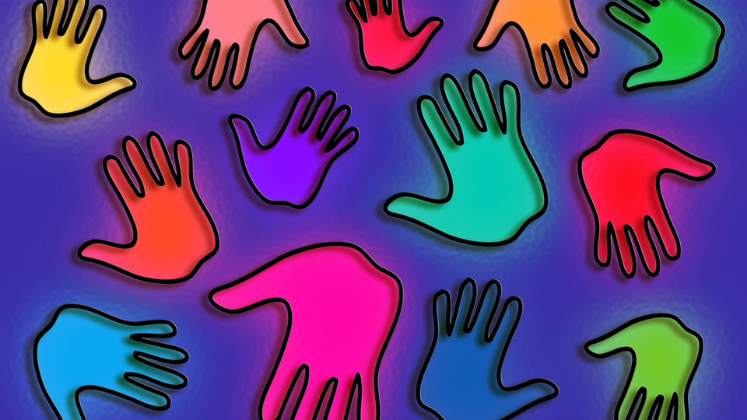 Such a conception of rights and law in general takes to task simplistic narratives on East/West or the ‘cultural relativism’ often espoused in mainstream accounts of human rights. Madhok also goes beyond recent critiques that have established human rights as hegemonic, privilege rejection over accommodation (Audra Simpson 2014) or advocate ‘delinking’ them from Western models (34-35), a concept associated with much decolonial literature. While the author notes these types of critique as vital, she suggests that they alone cannot account for the practices of subaltern mobilisations and struggles over rights (18). Instead, Madhok points towards the ‘push and pull’ (16) of human rights discourses – they are hegemonic yet insurgent, disciplining yet facilitate mobilisation, neoliberal yet redistributive. Within these frictions, the author argues, the productivity of human rights discourses is born. As such, subaltern mobilisations also lead to an expansion of our anthropological toolbox through which we can challenge one-size-fits-all epistemic containers.

Madhok deploys the concept of ‘haq’, a transregional vernacular conception of rights, to shift universalist human rights discussions towards an epistemic frame that is more fluid and attentive to local political forms and their entanglement in power relations with the state and its institutions (51). Through haq, the author argues, subaltern groups, especially women, self-fashion themselves into rights-bearing subjects (58) by transforming human rights into a vernacular discourse. But the book also shows that haq, as a process of subjectification, is itself implicated in gendered, racialised and historical contingencies, and suggests different shades of grey (72). Madhok commits to a disaggregation of these intersections by placing South Asian rights struggles in intricately entangled gendered power relations.

In Chapters Four and Five, the author analyses the struggles of South Asian subaltern mobilisations across a range of issues, from land ownership to environmental degradation, private capital and food security. Women are always at the centre of these struggles although their grievances are, in academic theory and global practice, often considered separate. Madhok narrates through these accounts the making of human rights in South Asia with great attention to the entanglements of the local and the global and the centrality of women’s struggles. She describes the ensuing vernacular rights cultures as ‘explicitly non-party political, articulat[ing] political claims in a language of rights [… that do not] regard the state as the dominant mainstay of citizen rights’ (104-105).

Madhok’s aim is an explicitly anthropological one in which vernacular practice challenges received theory through ‘a cautious–reflexive view’ (39). Madhok urges us to ‘run with’ our ethnographic observations, sustain them and be self-reflexive about the theoretical toolboxes we use to categorise: ‘Critique must also lead to the formulation of alternative […] thinking that would not only enable a shift in perspective but also generate a more expansive repertoire of conceptual and methodological tools with which to think’ (18).

Madhok’s commitment to a sustained engagement with vernacular critique, her focus on self-reflexivity and the production of ‘conceptual diversity’ (178) clearly speak to recent contributions in anthropology on the ‘ontological turn’. In particular, Martin Holbraad and Morten Axel Pedersen’s monograph (2017) resonates with the arguments in Madhok’s book as both are characterised by a commitment to radical methodological interventions. Madhok frequently makes use of the term ‘ontology’ as she develops a ‘feminist ontology’, an intriguing methodological tool to make sense of  intersectional struggles. She discusses various contributions to the recent debate about the ‘ontological turn’ in anthropology and sociology, especially in relation to the idea of alterity and as a displacement of epistemology (78-82). The author positions her definition in proximity to Ian Hacking’s Historical Ontology (2004), while grounding ontology in ‘a feminist critical reflexive politics’ (88).

However, Madhok also states that she is not engaged in an ‘exegesis of […] the “ontological turn”’ (72). I would argue, though, that Madhok’s book has multiple connections to recent contributions to the ‘ontological turn’. In Holbraad and Pedersen’s reading, a move towards ontology is not so much a metaphysical statement as an ethnographic sensibility. Alterity, one of the hallmarks of ontological interventions, according to them, is a tool to re-think anthropological method, not an ethnographic conclusion in itself. While Madhok does not explicitly reference such a conception of ontology, she nevertheless seems keenly attentive to its shared objectives. Therefore, it would have been interesting to see a more sustained engagement by Madhok with such contributions – her commitment to decolonising epistemic frames overlaps in many ways with Holbraad and Pedersen’s advocacy of the ‘decolonization of all thought in the face of other thought’. In line with this, Madhok’s book should be seen as an important contribution to the ontological turn.

Madhok’s book is a marvellous account of subaltern and women’s struggles in South Asia and their engagement with human rights. The author’s discussions are theoretically dense yet rewarding, and her ethnographic expositions are always enlightening. But like other decolonial interventions, Madhok’s discussions are not of mere theoretical value – they are located in a specific decolonial praxis: ‘The conceptual work on rights from the margins is essential in order to not only stretch and dislodge the existing normative boundaries of the universal, expand the existing languages of entitlements, impact and transform public policy but also to provide different visions for equality and justice’ (25). Madhok clearly shows what is at stake in discussions of subaltern struggles and decolonial theory and refuses to commit ethnographic work to the production of theories and concepts alone (94-95). Vernacular Rights Cultures should be of great interest to scholars and students of decolonial and postcolonial theory, anthropology, South Asia and human rights.

Moritz Koenig holds a PhD in law from SOAS. His doctoral thesis investigates the role of legal discourses in the Dutch colonisation of Indonesia. He is particularly interested in socio-legal and anthropological approaches to transregional law. Moritz is currently a Visiting Fellow at Middle East Technical University (METU) in Ankara researching early Turkish international relations with Southeast Asia and Kemalist political subjectivities.