Book Review: The Religion of the Central Luo by Okot p’Bitek

Book Review: The Religion of the Central Luo by Okot p’Bitek

LSE Professor Tim Allen reflects on the profound impact that Ugandan poet Okot p’Bitek‘s The Religion of the Central Luo had on his own approach to fieldwork among the Acholi people and their neighbours in northern Uganda. This insightful and engaging book demonstrates the originality of p’Bitek’s work, which challenged anthropology’s links with colonial rule and thinking and the discipline’s prevailing treatment of African religion, African history and African customs. 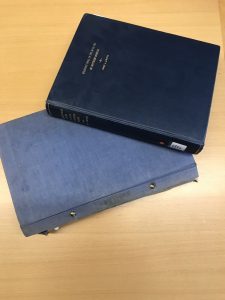 Some years ago, while researching in an Oxford library, I came across something that took me by surprise. It was a bound copy of a DPhil by the great African poet, Okot p’Bitek. So far as I knew, p’Bitek was never awarded a doctorate. He had died in 1982, not long after returning to Uganda following the fall of Idi Amin and the return to power of his old classmate, friend and rival, Milton Obote. He had been appointed as a professor at Makerere University in Kampala, but there had been no mention of him having a doctorate, although it was rumoured that Oxford University had refused to award one to him. The discovery of the manuscript prompted me to investigate and to discover things about p’Bitek that had been little known.

It turned out that p’Bitek had attended teacher training after completing secondary school and had started to work as a secondary school teacher in northern Uganda. In addition, he was an excellent footballer and was selected to play in the national team. He arrived in England in 1956 with the Ugandan Cranes. They played without boots and lost their first game to Wycombe Wanderers 10-1. They improved as they became used to the conditions, defeating Great Britain’s Olympic team in September 1956, but p’Bitek left the team during their tour, having talked his way into a course at Bristol University. He then applied to study law at Aberystwyth. Apparently, he wanted to prove to Obote, who had taken a degree in law after leaving school, that anyone could do it. He subsequently worked at the International Court of Justice for a period, before deciding to go to Oxford University to study anthropology.

P’Bitek’s experiences in Oxford were very mixed. He enjoyed exchanges with E.E. Evans-Pritchard and other well-known scholars but was appalled at the ways in which Africans were being studied. He strongly objected to the use of the terms ‘tribe’, ‘savage’ and ‘primitive’, and fundamentally disagreed with theoretical approaches to African religion, African history and African customs. 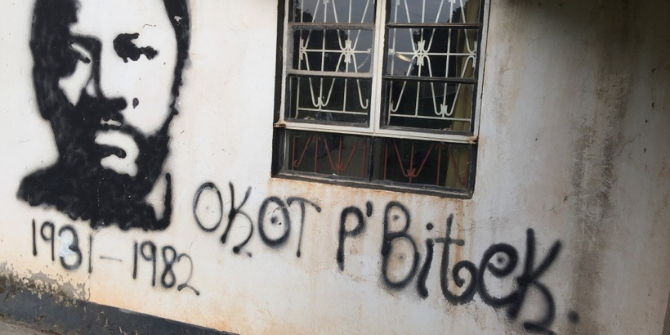 Image Credit: Painting of Okot p’Bitek near his family home on the wall of the cultural centre in Gulu, Uganda. Photograph by Professor Tim Allen.

The doctoral thesis he wrote was referred by his examiners – one of whom was Evans-Pritchard – in 1967. The examiners objected to his spelling, to a lack of clarity about what p’Bitek had observed himself, to when beliefs and practices had occurred and to the thesis title. He was re-examined in 1970, but it was judged that p’Bitek had not made sufficient changes and he was subsequently refused a right to ‘supplicate’. In other words, Oxford University failed the doctorate of one of the most significant of all African writers.

Reading the DPhil manuscript, it turns out to be almost identical to the book p’Bitek published in 1971 as The Religion of the Central Luo. He published it together with another short book, African Religions in Western Scholarship, which is about studying in Oxford and what he viewed as misunderstandings of African religion. Unlike p’Bitek’s epic poetry, which quickly became something of a global sensation from the end of the 1960s, the books are not as known as they might be, largely because they were produced by East African publishers and have not been widely available.

I first encountered both books in 1982 in a Nairobi bookshop. They had a profound impact on my approach to fieldwork among p’Bitek’s Acholi people and their neighbours in northern Uganda. It prompted me to focus on the fluidity of ethnic identities and the sharing of ideas about the spirit world and social life between ostensibly separated groups. At the time, I was largely unaware of how original p’Bitek’s writings were. It was before I studied anthropology seriously as a postgraduate in Manchester and later in Oxford.

It is easy to see why p’Bitek’s examiners found his work difficult to accept. The Religion of the Central Luo is not written in an overtly polemical style, but it is inherently subversive of anthropological approaches to African populations in the 1960s. He was not interested in functional analysis or explaining life in terms of conventional ethnic labels.

His examiners expected him to write about the Palwo, which was understood by his examiners to be a small ‘tribe’ which spoke a version of the Luo language. However, the meaning of ‘palwo’ (or pa-luo) in the Luo language is ‘people of Luo’, and p’Bitek ignored what he viewed to be imposed tribal boundaries created by colonial officials for their convenience. Instead, he wrote about aspects of the spirit world that were experienced, passed around, debated and deployed in changing ways among all the various Luo-speaking groups living in what had become Uganda. That included his own Acholi ‘tribe’ which, in African Religions in Western Scholarship, he explicitly argued was an invention of the British colonial administration in the 1920s. In that second book p’Bitek was much more explicit about his antipathy to the analytical approaches he encountered in Oxford. He went so far as to assert that there is no place for social anthropology in African universities, because it was a discipline that demeaned Africans and reinforced modes of colonial control, including control over the minds of African people.

Okot p’Bitek was writing in this way before the publication of key works by anthropologists in the 1970s and 1980s which challenged the discipline’s links with colonial rule and colonial thinking as well as descriptions of African lives within supposedly functional units. His work also prefigures debates about the objectification of the ‘other’ and conceptions of social life in relation to temporal narratives. Reading p’Bitek’s book on religion nowadays, it comes across as modern, insightful and engagingly easy to read. Looking back, it is perhaps unsurprising that his DPhil examiners didn’t know what to make of it – although I do wonder if his thesis would have been failed if he had studied at an English public school and had not been a blisteringly critical black African.

Okot p’Bitek’s prose books have been recently re-published, together with the equally neglected work on the Acholi people by the Marxist scholar Frank Girling, in Lawino’s People, with an introduction to their work by Tim Allen.

Professor Tim Allen is the inaugural Director of the Firoz Lalji Institute for Africa, and also Director of the Centre for Public Authority and International Development, both based at LSE. His research has mainly focused on Africa.

Posted In: Africa and the Middle East | Contributions from LSE Staff and Students | Decolonisation in Higher Education | Sociology/Anthropology 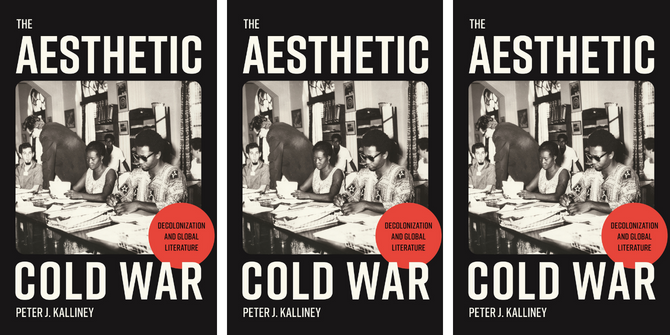 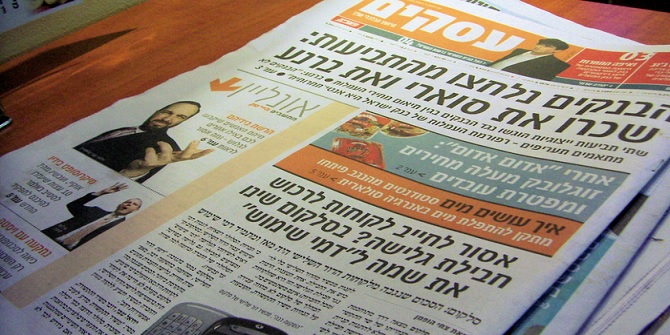