This review is part of a theme week published for International Women’s Day 2019 (#IWD2019), showcasing and celebrating women’s scholarship across the social science and humanities. You can discover more of the week’s content here. You can explore further resources on decolonisation in higher education at the Firoz Lalji Institute for Africa’s Decolonisation Hub. 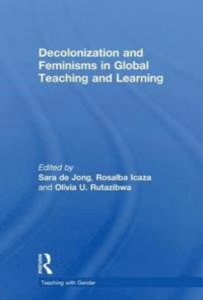 Yet perhaps the greatest contribution this book has to make is that, if read carefully enough, it forces the reader to make decolonisation a ‘personal journey’, recognising the elements of colonial and patriarchal thinking that they may have inadvertently internalised and reproduced (71). As a teacher who works within a university department that (somewhat) recognises the need to problematise knowledge production, I was reading this book at the same time as teaching about movements to decolonise education. Shortly after one of my seminars, I opened the page to Roselyn Masamha’s ‘Post-it Notes to My Lecturers’ and read her comment on how, when students ‘make ill-informed derogatory comments that reinforce stereotypes, not challenging these suggests collusion’ (147). This was my cue to have a flashback to my own attempts at diplomacy earlier that same day, when I had politely suggested to a student that their view that colonisers had brought ‘logic,’ ‘medicine’ and ‘infrastructure’ to the colonies should be contested. Yet by suggesting that they should be contested, I didn’t contest them with sufficient detail; I simply hoped someone else would. No one did. Are my own nervous desires to cultivate freedom of expression helping to reproduce what I have often discovered to be the racist, and sexist, status quo? I think they probably are, and I am grateful to de Jong, Icaza and Rutazibwa for helping me realise that.

Fawzia Mazanderani is a Teaching Fellow in the School of Global Studies at Sussex University. She has a background in Social Anthropology (The University of Cape Town), The Anthropology of Development (SOAS) and International Education (Susse