In Rhodes Must Fall: The Struggle to Decolonise the Racist Heart of Empire, editors and members of Rhodes Must Fall Oxford Roseanne Chantiluke, Brian Kwoba and Athinagamso Nkopo offer a collection that gives first-hand accounts of the Rhodes Must Fall protests, discusses the response from authorities and explores the practical lessons learned. Grounded in the immense learning of the Fallist movements, this anthology enriches the student movement literature and offer concrete paths forward in the quest to decolonise our institutions, writes Priyanka deSouza. 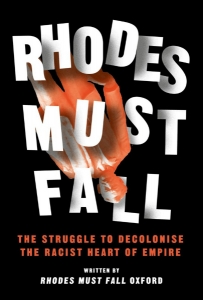 Most mainstream media states that the Rhodes Must Fall (RMF) movement was born on 9 March 2015 when Chumani Maxwele hurled excrement at a statue of Cecil Rhodes at the University of Cape Town (UCT). Through this action Maxwele brought attention to the fact that 21 years after the end of Apartheid, nothing had changed: UCT has assumed the same role that Rhodes did in continuously frustrating the hope of Black South Africans using the same technologies of exploitation.

However, Kealeboga Ramaru in her piece, ‘Black Feminist Reflections on the Rhodes Must Fall Movement at UCT’, in this new anthology, Rhodes Must Fall, traces a much longer intellectual history of protest against the suffocating structures of UCT, which was sustained and given life by the labour of Black feminists, Black womxn and queer people whose voices and claims to space were suppressed during RMF, often with violence. She traces the work done by Black Feminists and the Trans Collective during RMF in protesting and organising teaching and learning spaces to prevent imaginings of ‘decolonization’ from falling prey to the very hierarchical system that they were trying to dismantle. RMF sparked ‘Fallist’ movements in universities around the world that resonated with the experience of marginalisation of Black students at UCT.

Rhodes Must Fall: The Struggle to Decolonize The Racist Heart of the Empire, edited by movement leaders of Rhodes Must Fall Oxford (RMFO), Roseanne Chantiluke, Brian Kwoba and Athinagamso Nkopo, provides a much-needed intellectual space for movement leaders to give a first-hand account of the protests they organised, the response from authorities and importantly, and uniquely, practical lessons learned.

The book is divided into three parts. The first provides a detailed account of RMFO. The second consists of short accounts from sister movements in other universities: Harvard, Princeton, the University of Ghana, the School of Oriental and African Studies, Sussex, Queen Mary University and University College London. Several themes carry through the accounts of these movements: what does a decolonised university look like? Who should lead the decolonisation movement? And what strategies should movements employ to bring about change in their institution? The third section connects the intellectual space of the movements documented in the book with global decolonisation movements: such as the struggle to decolonise West Papua, the Palestinian struggle against the settler colonialism of the Israeli state, the call for reparations at the level of the nation state and at the university level and the work being done to decolonise curricula, even in subjects like mathematics. 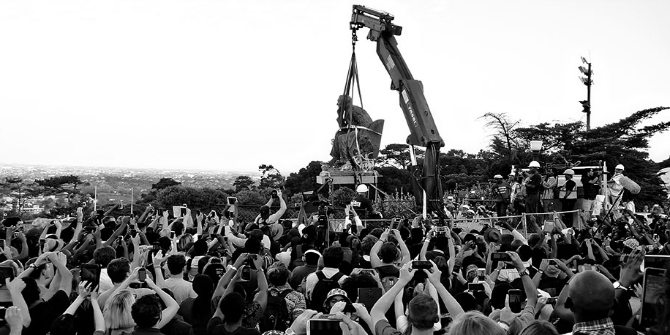 It is perhaps unsurprising that this book was born from RMFO. Unlike at UCT, where the Rhodes statue was removed by the University, at Oxford it continues to stand tall over Oriel College after donors threatened to revoke 100 million pounds of funding if Oriel capitulated to RMFO demands. Public figures, including the Chancellor and Vice Chancellor of Oxford University, Chris Patten and Louise Richardson, vilified and misrepresented the movement, accusing the students of trying to ‘erase history’. Individual students were viciously targeted by the mass media. Many of them received death threats. Almost no space was given to the fundamental demands of RMFO for an inclusive university and their demands for the right to critically question the geopolitics of the Eurocentric knowledge production system in which they were expected to study. This book seeks to change this dynamic.

The editors state in the Introduction that the attack on RMFO in the British press is the manifestation of British society’s staunch denial of its colonial past and its legacy. The first section starts by setting the record straight by laying out RMFO’s powerful founding statement. RMFO, just as in the accounts of other movements in this book, lifts up the work done before at Oxford that set the stage for RMFO to happen. By doing this, it cuts at the heart of the myth that RMFO was born in a vacuum by a small group of disgruntled students, but was rather a movement within a history of similar efforts to destabilise the hegemony of whiteness that had marginalised the lived experiences of Black students for generations. Such accounts also help to illuminate the paucity of institutional support for Black students within the universities, and the difficulties faced by Black leaders of these organisations in serving their community. We see this time and time again in other sections of the book, such as in Ayo Olatunji’s account of being the only ‘Black Minority Ethnic Sabbatical Officer’ working in an English university.

The book goes on to tell the story of RMFO properly by including key speeches, letters of support, interviews with a range of RMFO activists, poems and spoken word that tell the hidden history of Black people in the city of the Dreaming Spires, and reveals how the very architecture of Oxford University was co-opted to paint a false story of the grandeur of the British Empire at the expense of the Black bodies on which it was built. One of the letters of support for RMFO included in the collection is by Michelle Codrington, a Black Unionist, teacher and a descendent of a family enslaved by Christopher Codrington, after whom the Codrington Library in All Souls College was named.

Histories like that of the Codrington Library serve to dislocate Oxford from the space of the ‘global economy’ and instead locate it in a real physical space, with a very material, bloody history. Chantiluke, in her chapter ‘British Values and Decolonial Resistance in the Classroom’ in the third section of this book, further reminds us that although Oxford University is near the top of the world rankings, parts of the town of Oxford are amongst some of the poorest in the UK, where 25 per cent of the children who are resident live below the poverty line. She asks the important questions: what does Oxford owe to the local community? Are universities supposed to serve the interests of the nation state, the global knowledge economy or the communities in which they are physically located?

The book doesn’t shy away from being ‘real’. The movement leaders of both RMFO, as well as other movements documented in the second section of the book, discuss the effects of studying in a space in which their knowledge systems and ability to interpret their own experiences are constantly challenged and called into question. A particularly moving chapter was the open letter from Dr Lwazi Lushaba to her boss, the Head of Department at UCT, who wrote about being made to feel like a child, having her decisions questioned, being prevented from speaking up at meetings by the older white men in her department.

One of the most compelling aspects of the book is the candid account of the internal politics of the movements in question. The first part on RMFO also outlines how the movement struggled with anti-Blackness and patriarchy within the movement. The students who participated in RMFO were from different parts of the world where ‘Blackness’ manifests itself differently. The ideological origins of the movement in RMF at UCT meant that the movement at Oxford was Black-founded and African-led. However, RMFO still had to grapple with the variety of claims and experiences of the activists involved, and the thorny question of who should lead the movement. This chapter provides a rare glimpse into the politics and pragmatics of practising solidarity, and serves as a cautionary tale for other movement-builders.

The book also takes up the question of decolonising whiteness. It contains an interview with three white allies of RMFO detailing how they learned to listen and lend support without being at the centre of the movement, without being self-congratulatory. The question of whether it is possible for white people to be allies runs through other sections and chapters of this book. Nkopo’s later account of being an activist in South Africa questions whether white people can indeed be allies as they have less to lose, and therefore do not put themselves at risk in the same way as Black people. One of the things the book could have focused more on is the legacy of these movements within the institutions where they took place.

Finally, the book does more than just talk about the strategies adopted by various movements but also describes what a decolonised institution could look like. We see for some authors that decolonisation means white institutions recognising the bloody role they played in suppressing Black histories, and offering reparations. Some of the contributors (Sir Hilary McDonald Beckles, the Vice Chancellor of the University of the West Indies) speak about the need for reparations at the level of the nation state. Dr Patricia Daley, one of the few Black Professors at Oxford, speaks about the reparations owed by the university to its Black students for the epistemic violence it has wrought. Other authors, such as Esther Stanford-Xosei, write about the form reparations should take.

In summary, the wonderful pieces in Rhodes Must Fall, grounded in the immense learning of the Fallist movements, enrich the student movement literature and offer concrete paths forward in the quest to decolonise our institutions. It connects these movements with politics on the scale of the nation state to help us see these institutions in context. Importantly, this book also sets a precedent for telling the stories of movements, and creates its own space to do so properly.