“Is war and conflict an inevitable feature of global politics?”

War and conflict takes several forms; military or non-military and interstate or state versus organisation. I shall use the steps to war (Vasquez and Henehan, 1999) and motivated biases (Mercer, 2005) theories to support my argument that war and conflict may be an inevitable feature of global politics. These theories have been chosen due to their seemingly increasing relevance to modern global politics. As explained by steps to war, many present day states have been fighting because of irresolvable matters of territory. As per motivated biases theory, human psychology at a large scale, some argue, leads to in-group cooperation and out-group discrimination, which often leads to war. On the other hand, I shall use the democratic peace theory – suggesting that democracies do not fight each other – to support my argument that in fact, war and conflict may be avoidable in global politics. At the core, these theories attempt to explain the causes of war. Yet, it is fair to assume that if cause is avoidable, then at some point, effect can be avoided too and conversely, if cause is inevitable, then at some point, effect is inevitable too.

Consensus exists that matters such as territory are irresolvable in global politics. It is impossible to increase the amount of land in the world and to change the fact that our wants are unlimited. This scarcity often leads to disputes. While often, the disputes are limited to legal and economic conflict, in other instances, concerned parties resort to using force, particularly when those parties are geographically close. The steps to war theory in fact suggests that war and conflict can arise owing to such reasons.

An example of the steps to war theory applying to present day global politics is the case of Israel and Palestine  disputing  territory  which  has  often  escalated  to  military  conflicts (The New York Times, 2009).  Another relevant example of violent conflict due to irresolvable matters is the case of Iraq and Syria fighting the Islamic State (IS) terror group to reclaim their territory (The New York Times, 2017; US Department of Defense, 2018; Reuters, 2017). This is evidenced in the following map which shows the significant changes in control of territory, from IS to Iraq and Syria following military conflict (BBC, 2018). 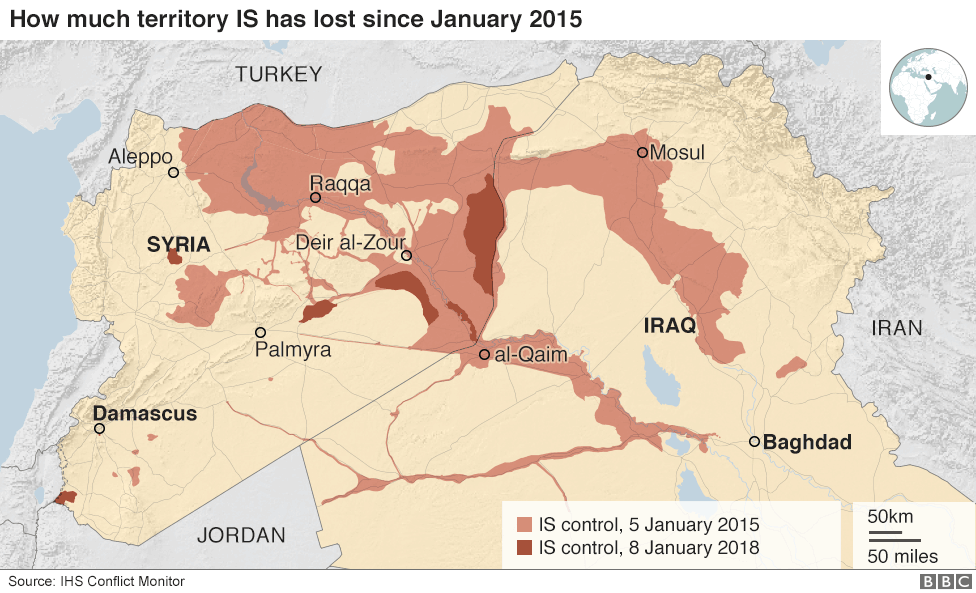 Motivated biases and political psychology provides further insights on the topic. According to Mercer (2005), humans get a sense of identity in groups which provide a sense of belonging (part of the emotion in identity). While this emotion in identity builds trust and allows cooperative problem solving, Mercer argues that this emotion also creates self- esteem and pride which as a result could lead to a feeling of superiority and discrimination of other groups. Accordingly, it follows that discrimination could become violent. Quoting Mercer,  “Emotion  drives  in-group  cooperation  and  out-group  discrimination” (2005, p. 97). At global scale, this could inevitably lead to war.

Examples of motivated biases leading to discrimination, war and conflict could include:

However the theory of democratic peace – the belief that democratic nations do not fight each other using force, although they may fight non-democracies – could help argue that war and conflict is avoidable. It may not be democracy, intrinsically, which is the cause of peace between democracies. Rather, the causes of democratic peace are arguably some features of democracy. Such features, according to Russet et al (1993) may include:

The following table (Russett et al, 1993, p.21) exemplifies democratic peace. Dyads, in this context, is a term referring to pair of states close to each other — geographically, politically and/or economically. As it can be seen, during this time period, in no case did a democratic dyad go to war and the number of disputes (conflicts) was far lesser when the dyads were democratic. This could indicate a causal relationship between the features of democracy and democratic peace. 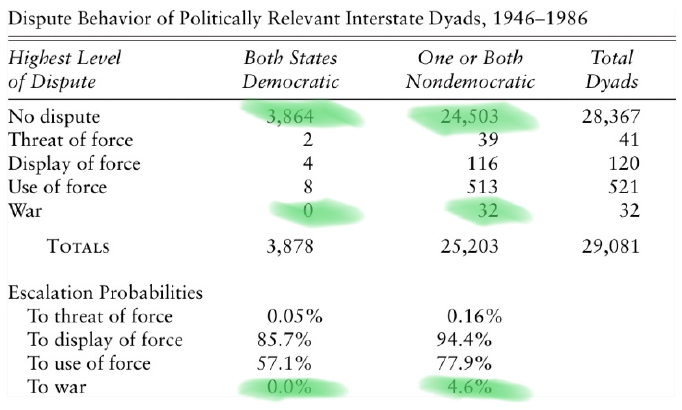 Nonetheless, it would be a fallacy to assume that democracies are absolutely peaceful. While democracies do not use military means to start wars and conflicts among themselves, passive means and intimidation are frequently used. For instance and arguably, economic integration like the creation of the European Union (EU) can be regarded as a form of disguised protectionism against the rest of the world, implying conflict in a more subtle sense. A less subtle example involves the recent tariffs on steel between the USA and the EU (Reuters, 2018a), and the USA’s threatened tariffs on EU car imports (Reuters, 2018b). Moreover, “they  (democracies)  often  initiate  international  disputes  during  economic slowdowns or recessions, or if in economic difficulty respond more aggressively when others initiate disputes” (Russett et al, 1993, p.29). Indeed, there seems to be a correlation between the American economic slowdown during the early 2000s and the Iraq invasion of 2003. It is alleged that this correlation is synonymous with causation, rather than mere coincidence.

Limited resources are available to satisfy unlimited wants. Additionally, while ethics change, human psychology seems unchanging. Therefore, humans will never stop fighting over limited resources. Moreover, believing that all nations will become democratic and that democratic peace will end all wars is believing that Earth will be named Utopia. Much sense lies in saying that while it may become less lethal, war and conflict – at present and in the foreseeable future at least – is an inevitable feature of global politics.

Reuters. 2018a. ‘EU states back measures to limit steel imports after U.S. tariffs‘. Retrieved from https://reut.rs/2tVO9c8