The Need for Absolute Sovereignty: How Peace is Envisaged in Hobbes’ Leviathan

The Need for Absolute Sovereignty: How Peace is Envisaged in Hobbes’ Leviathan 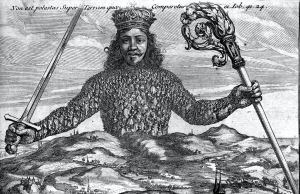 Deborah Baumgold (2017, p.215) states that Hobbes’ theory is read ‘for its accounts of human nature and the logic of the social contract rather than its defence of absolute government’. This suggests that his defence of absolutism – defined as ‘unconditional and unified sovereign authority; no collective right of resistance’ (ibid.) – is separated from his explorations of human nature and the logic of the social contract before being discredited. Focusing on ideas explored in Leviathan and some surrounding literature, the following pages will take a more holistic approach, examining several of Hobbes’ concepts concurrently. There are two reasons for this. First, Hobbes’ argument for an absolute sovereign relies heavily on his account of human nature. Second, critics of this argument often point to discrepancies between Hobbes’ descriptions of human nature and his account of the logic of social contracts. These reasons mirror the two main sections of this article – the first section presents Hobbes’ argument for why sovereignty must be absolute while a second gives a brief overview of its critiques and considers their validity. It is concluded that such critiques of a Hobbesian sovereign are unsatisfactory, therefore sovereignty can and must be absolute due to the necessity to limit human nature from disrupting or preventing lasting peace. This is done within the framework of Hobbes’ philosophy – based on the assumption that his assertions about human nature are correct.

Much of Leviathan explores how humans might exist outside of civil society, without government. These ideas about human nature underpin Hobbes’ argument for the necessity of absolute sovereignty. Hobbes refers to the imagined condition of human life external to civil condition as ‘the state of nature’ (SN). Infamously described by Hobbes as ‘solitary, poor, nasty, brutish, and short’ (1995, p.113), the SN is essentially explained as a state of absolute freedom and therefore of constant mortal danger. Hobbes does not necessarily believe that humans are inherently violent – rather that humans have a ‘natural right’ to do what they deem necessary to preserve themselves. He also maintains that securing self-preservation generally means acquiring more power; man ‘cannot assure the power and means to live well, which he hath present, without the acquisition of more’ (ibid, p.161). In short, each person in the SN will attempt to extend their power to ensure that they are protected. Owing to what he sees as rough natural equality between all humans (ibid, p.110), Hobbes can only imagine total violence erupting: when everyone is free, everyone is a threat, so humans are locked in a series of pre-emptive attacks to defend themselves and secure more power in the interest of security.

Hobbes’ proposed escape from this violent existence is pursued through entering a social contract where each person’s natural right is transferred to an absolute sovereign. The process through which he proposes we enter such a contract is investigated further in section two, alongside criticisms of absolute sovereignty. First, it is worth discussing why Hobbes saw absolute sovereignty as the necessary alternative to the SN. When the right of nature is transferred to the sovereign, the latter become all-powerful – the sole agent or group in society that can decide how people are governed and when to sanction its subjects’ decisions with death. This results in an elimination of physical conflict between peers; subjects are obliged by the sovereign’s power to obey them, thus eliminating conflict between subjects. In short, Hobbes traces peer to peer violence back to egoism, or an inherent desire and right to preserve the self, concluding that to eliminate said violence we must alienate this right to an absolute sovereign. Hobbes imagines that, were the sovereign’s power limited by rules, conflict would arise in their interpretation; acting in their own self-interest, humans would disagree on how these rules should be interpreted. Jean Hampton (1987, p.103) highlights how, if this were the case, lack of agreement would work in conjunction with limits on the sovereign to restore a ‘state of nature’. Hampton describes a succession of events where conflicts would arise due to self-preservation. The lack of absolute sovereignty would mean these conflicts are never resolved peacefully as each can interpret the rules as she sees fit, and eventually the commonwealth and civil society would be destroyed by non-peaceful attempts at resolution. Hence, Hobbes sees absolute sovereignty as necessary; anything less is essentially akin to the SN and will result in a return to ‘war of every man against every man’ (1995, p.116).

This second section outlines critiques of Hobbes’ argument for absolute sovereignty, showing through their invalidity that sovereignty must still be absolute. This is done with a focus on critiques of a Hobbesian sovereign that build on Hobbesian ideas of human nature and the social contract. Generally, such critiques focus on why sovereignty could not be absolute, making the question of why it must be effectively null. For example, Samuel Pufendorf’s De jure naturae et gentium libri octo expands on Hobbes’ theory of natural right, suggesting that because of both natural equality and the desire for self-preservation, people in the SN would not act as violently as Hobbes imagines. Stating that ‘no man … wants to fight with a person as strong as he is, unless he is under some necessity, or in circumstances which look favorable for his success’ (Pufendorf, 1935, p.170), Pufendorf argues that if Hobbes is correct in assuming that people wish to secure their own safety when there are no limits on their freedom, two potential combatants in the SN will be inclined to recognise that conflict is equally risky for them both and thus avoid it. This suggests there is no need to leave the SN in the first place; for Pufendorf the natural conclusion of Hobbes’ account of human nature is peace, rendering the search for that same end through an absolute sovereign obsolete. However, Pufendorf neglects the fact that Hobbes did not actually claim there would be complete equality. Rather, Hobbes clarifies that this equality would only be approximate – he admits there are those who are weaker of body or mind (1995, p.110). This means that the circumstances Pufendorf describes, where an actor in the SN perceives they are ‘favorable for his success’ (1935, p.170), can still arise – people would still be willing to engage in violence. As such, self-preservation would require a stronger guarantee of lasting peace and Hobbes’ argument for an absolute sovereign holds true.

Others critique the mechanisms of entering a social contract, where each person in the state alienates their natural right. As before, understanding Hobbes’ wider philosophy is necessary to defend his argument and understand its critiques. Hobbes envisaged an alienation contract whereby humans in the SN give up their right to govern themselves to an absolute sovereign, on the condition that everyone else does the same. The sovereign is not bound by any contract; it is only between subjects. Hobbes imagines humans making this sacrifice of their subjective right and judgement to an absolute sovereign to gain security. John Locke believed this decision to give up power to a supreme authority was contradictory to Hobbes’ egoism. Locke suggests that proposing such a contract ‘is to think, that men are so foolish, that they take care to avoid what mischiefs may be done them by pole-cats, or foxes; but are content … to be devoured by lions.’ (2003, p.140). Locke is arguing that any rational person, concerned as Hobbes proposes with self-preservation, would be unwilling to agree to such a contract because it would mean subjugation to a greater threat. This is unconvincing; the idea that being subject to absolute sovereignty would be seen by humans in the SN as more dangerous than their current condition fails to consider that in Hobbes’ ‘war of all against all’, each person would engage in violence out of necessity for self-preservation. There is no such necessity for an absolute sovereign to engage in this violence; they are all powerful. Hobbes also argues that, should the sovereign attempt to further extend their power to secure their position (as all individuals do in the SN), this would involve benevolence rather than violence. Consider that the body politic depicted on Leviathan’s cover is composed of the subjects of the state and headed by the absolute sovereign: the sovereign’s power is derived from its subjects, therefore they would not seek to weaken them. This is reinforced by his claim that ‘the good of the sovereign and people, cannot be separated’. In short, Hobbes’ argument that rational actors would willingly enter his alienation contract holds true; the absolute sovereign would hold a monopoly on violence but is less likely to use it on their subjects than if such power were divisible. There is still more incentive to enter such a contract than to live outside of one. Therefore, absolute sovereignty is still possible.

In conclusion, Hobbes’ argument for absolute sovereignty derives from his account of how humans act free of constraint, and the need to control the ensuing violence. The best guarantee of peace for Hobbes is the alienation of individual rights to a unified sovereign. Assuming that his account of human nature is correct, Hobbes is right to argue that this is necessary; were humans to enter civil society with a different kind of contract, that divided power and the ability to judge whether this contract had been breached, egoism would result in conflicts that could only be solved through violent means. Various critics of Hobbes have attempted to draw attention to flaws in his logic to show that achieving such a sovereign would not conceivably happen, yet their general oversimplification of his ideas results in a collection of secondary literature that fails to convincingly show that absolute sovereignty is not credible. As such, absolute sovereignty should still be considered possible and necessary; if the goal of the social contract is the complete avoidance of violence, then sovereignty must be absolute.

Cover Image Source: The frontispiece of the book Leviathan by Thomas Hobbes; engraving by Abraham Bosse via Wikimedia Commons

The author, Thomas Walsh, is a second year BSc in Politics and History student at the London School of Economics, Department of Government.