The 2019 UK General Election and the Modern Class Cleavage

The 2019 UK General Election and the Modern Class Cleavage 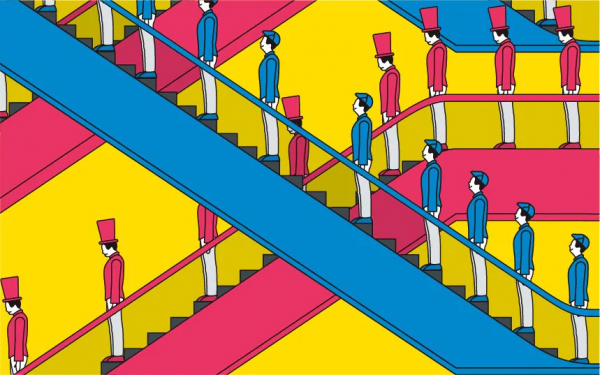 In the 2019 UK General Election, a seismic shift towards the Conservatives took place. Despite having made strong seat gains in 2017, Labour lost 60 seats (54 to Conservatives), many of which were formerly Labour safe seats along the northern English ‘Red Wall’ (BBC, 2019). Journalists and media commentators have since – in my view – wrongfully depicted this as the result of traditional working-class voters angry over Brexit and Corbyn’s leadership. I strongly disagree with this view, as it fails to explain long-term economic factors which have become increasingly relevant in recent years (Rayson, 2020, pg 30-31).

Much of the literature on social and class cleavages so far has focused on how class as a social identity attached to political positions has declined as countries have reached post-industrialism. There are two broad paradigms here. What is usually described as the dominant view seeks to examine how economic insecurity divorced from class identity motivates people to vote for reactionary parties (unemployment, rising costs etc.) (Inglehart/Norris, 2016, pg 10-12). A less popular but nevertheless prominent proposal is a cultural or values-based explanation that regards growing right-wing populism as a working-class, anti-globalist ‘cultural backlash’ against liberal values (Inglehart/Norris, 2016, pg 13-15). The link between these is they both build off the concept of a ‘left behind’ working-class.

I propose they both start from the wrong point. The existing NRS social grade system was devised in the 1970s and is no longer reflective of the class cleavages in Britain. Newly anti-Labour and pro-Leave communities do tend to be deprived and do have poor services relative to England’s average (TRF, 2020, pg 5-6). Furthermore, there had been a consistent decline in Labour support in post-industrial areas (such as the ‘Red Wall’) since the 1980/90s, with specific elements of each election acting as accelerants (Cutts et al., 2020, pg 20).

I argue that this veil of deprivation hides growing asset ownership for the increasingly older residents of these communities. My work employs literature and data to propose that while traditional collective class identity is indeed declining, the rational actor model based on class has not receded so much as its boundaries have changed. In particular, this piece will seek to utilise housing status as a new indicator of political class identity rather than metrics such as annual income or social grade which do not explain peoples’ financial circumstances accurately because they ignore outgoings and asset wealth.

In many of these ‘Red Wall’ seats (that in some cases had voted Labour for nearly their whole existence), a huge decline in younger, working-age voters and a surge in older voters has taken place since the early 1980s. Some have argued that the primary factor for Labour’s losses must therefore be age. While age certainly seems to correlate with voting behaviour, this does not explain why age is important, I seek to show it is because of a new class divide between older and younger voters.

Older voters are significantly more likely to own their own homes and are provided with steady, if lower-than-average, income from stock assets, second-home rents, and pensions (ONS, February 2020) (Ainsley, pg 25). Given that many post-industrial areas have older populations, it is no surprise that home ownership is slightly higher than average at 64.05% in Red Wall seats (Rayson, 2020, pg 14). It is probable older voters gather in periphery areas more frequently because housing is cheaper, they are not working and are usually closer to green areas (CfC, 2015, pg 8). The data is very different for those below 65, with many more having a mortgage or privately renting. Older voters are significantly more likely to vote Conservative, suggesting that old-age asset protectionism likely boosts Conservative vote share.

Contrastingly, let’s consider a young person in a city who works in a BC1C2-grade job and has an income of between £15,000 and £25,000. They have to pay private rent well in excess of £500/month (£1,200/month in London), (potentially) combined with student loan repayments, utility bills, food costs, leisure costs, travel costs and then any unexpected expenses (ONS, June 2020). Commuters face increased travel costs. Overall costs are high and continuous meaning young people are less likely to be able to save money to purchase assets. Ainsley corroborates that a large portion of lower-income, renting workers in the service economy are found in lower age-brackets (Ainsley, 2018, pg 24-26). Despite some ethnic and gendered variation, young people appear to have a generally homogenous experience of finances as indicated by their high pro-Labour vote share and high renting-rate.

Older voters thus appear more likely to have an interest in preserving their economically hegemonic position. Younger, ‘new working class’ voters appear to be more economically insecure than these older voters, potentially fuelling their high voting rate for Labour. The cleavage probably isn’t age as the data initially suggests, but a redefined version of class based on asset wealth, living costs and then social grade.

The decline in vote share for Labour amongst the lowest social-classes in 2019 did not correlate with the huge growth in Conservative support that would be expected if working-class people had drastically shifted towards the Conservatives. Brexit first affected voters in 2017, with traditional working-class voters much more likely to vote Conservative in 2017 (when Labour lost several Red Wall seats than before (Rayson, 2020, pg xii). This trend was dramatically escalated in 2019. The data initially suggests most 2019 Labour switchers fled to the Lib Dems/Greens due to a Remain tendency. However, Rayson notes that Labour lost around 1 million votes to the Conservatives and that many Conservatives switched to the Lib Dems, masking Conservative seat gains in the national vote share (Rayson, 2020, pg 19-22).

The predicted surge to the BXP did not materialise, though the vast majority of votes they won were centralised in the ‘Red Wall’ and the BXP did not stand in most Conservative seats, meaning that the Lib Dems and BXP acted as ice-breakers for Conservative candidates in the Red Wall, accelerating Labour’s decline (Cutts et al., 2020, pg 12-16).

The pro-Conservative shift was probably driven by older voters in its initial phases given that 2017 was the election that age became the apparent biggest factor in general voting behaviour. It is probable that a combination of a pro-Brexit older generation and a realignment of class identity behind asset ownership in these regions meant that older voters were already primed to vote Conservative, with Brexit acting as an accelerant to this in 2016-2019 (Cutts et al., 2020, pg 20). Unemployed voters also notably backed Brexit in significant numbers, seeking out change at any cost. Corbyn’s neutral stance on Brexit is known to have turned off both older voters and unemployed voters who felt they couldn’t trust him (Rayson, 2020, pg 192-193). This coalition enmeshed between 2017-2019 to deliver significant damage to Labour.

As earlier mentioned, some academics have proposed a ‘cultural backlash’ cleavage based on values or ‘nostalgia’ (Adler/Ansell, 2020, pg 351-358) (Inglehart/Norris, 2016, pg 13-15). This poses a challenge to my thesis, but I counter-propose that this conclusion relies on an assumption that anti-globalist voters are economically insecure and hostile to outsiders. The data shows that homeowners and social renters were the largest supporters of Brexit and of the Conservatives in 2019, with both housing cleavages clearly being more secure than those with a mortgage or those who privately rent. Though this may not be reflected in their income or their occupation, their housing situation is highly unlikely to be affected by economic crisis rendering insecurity a poor explanation.

Unfortunately, it appears the British political establishment sees itself as narratively rigged into a traditional class cleavage system – Labour claim the ‘traditional working-class’ and the Conservatives representing the ‘middle-class+’. The narrative of this traditional class cleavage being a dividing line no longer held water in 2017/2019. It could be argued that Boris Johnson’s Conservative party recognised this in 2019 and adjusted their strategy towards traditional working-class seats. Many commentators have looked to explain voting behaviour through new social cleavages and mass-collecting data, but this is probably a misguided approach (see Ipsos-Mori reports).

Whereas those in social housing and those who own their homes more heavily lean towards the Conservatives and Brexit, those who live in privately rented accommodation (often significantly more expensive) or who have a mortgage appear more likely to seek out policies which will improve their personal economic security. This might include better workers’ protections, stronger tenants’ rights and more efficient public services. We should seek to understand why different characteristics like age affect voter behaviour, rather than placing preconceived cleavages like age and ethnicity into ill-fitting stereotypes that may not be helpful for understanding voter behaviour (Ainsley, 2018, pg 25) (Best, 2011, pg 282).