In What Sense Can Archives Be Viewed As Political Institutions?

In What Sense Can Archives Be Viewed As Political Institutions? 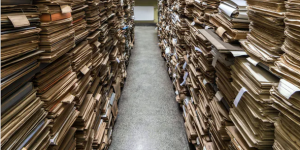 In an increasingly digitised world, it is no understatement that data is the highest-valued currency. If data is power, then archives stand unbowed. Still, a question lingers: are archives only powerful from a purely material approach or do they have considerable political implications as well? This paper aims to explore the nature of the role of archives as political institutions. For the purpose of this paper, archives refer to collections of historical records, particularly records related to government affairs, whereas political institutions refer to any organizations or groups involved with the political interests of a state’s populace. Archives function as democratic instruments by devolving access to data to the general public, assisting transitional justice, and empowering people groups confronting identity insecurity.

By decentralizing access to data, public and digitised archives can serve as tools of democratisation that decimate the hegemony over knowledge. This role of archives in devolving access to data is inherently political when examined through a Foucauldian viewpoint, which asserts the creation of knowledge as a political process in itself. In Discipline and Punish, Foucault examines how a society’s perception of truth and reality is shaped by forces of power that establish their own “regime of truth” (Foucault, 1975). This approach effectuates all knowledge—including those spawning from archives—as inherently political tools that further narratives selected and imposed by a small oligarchy. In other words, archivists are “active participants in the dynamics of power relations” as “the exercise of political power hinges on control of information.” (Cunningham et al., 2013) This hegemonisation of knowledge is detrimental to the functioning of a democracy, as explained by Paulo Freire, Brazilian scholar of critical pedagogy, in Pedagogy of the Oppressed. According to Freire, when knowledge “serve[s] as a crafty instrument for the denomination of one person by another,: knowledge becomes a pretext for manipulation that furthers tyrannical motives. To confront this hegemony over knowledge, digitised public archives offer an effective solution.

Digitised public archives serve as democratic tools that confront the monopoly of knowledge by devolving both the creation and diffusion of archives to the general public. Digitised public archives embody the post-custodial era, which refers to the preservation practice whereby archivists oversee the management of records but do not necessarily hold custody of the records like they would in private repositories. Hence, due to their free and transparent disposition, digitised public archives work towards the democratic interests of the general public by entitling citizens access to sizable databases and thereby enhancing state accountability. For instance, digitised public archives such as The Center for Legislative Archives and the Library of Congress in the United States hold expansive  government data such as Congressional records and legislative commission, all of which can be retrieved by virtually anyone with access to the internet in a matter of seconds. This accessibility enables citizens to exercise their freedom of information and engages political socialization in a way similar to mass media. However, it is important to note that the mass media has an arguably stronger intent to predispose the public while disseminating data, and although archives are relatively more neutral by definition, they are still implicitly influenced by forces in charge of recording and preserving them. Nonetheless, by deregulating and devolving access to data to the general public, post-custodial digitised public archives function as political institutions that strengthen democracies by enhancing government accountability and subsequently minimizing the scope for misinformation.

In addition to devolving access to data, archives also central roles in assisting transitional justice, which refers to the process by which countries recovering from periods of severe political repression address systemic human rights violations. Archives facilitate transitional justice by operating as watchdogs of democracy. For instance, public archives were key players  in the events and aftermath of Guatemala’s oppressive military rule in the twentieth century. In 2005, researchers in Guatemala uncovered 75 million pages worth of police records dating back to the years of the conflict. These records would later be called the Historical Archives of the National Police (AHPN). Human rights organization, with foreign assistance, set out on an extensive project to restore the files while AHPN worked alongside and digitised the records to make them widely accessible to Guatemalan citizens. The digitised archives then became the central propagators of the country’s movement towards transnational justice. The records exposed the shrouded secrets of the country’s armed forces undertaking during the period of internal conflict by unveiling how the state’s security forces murdered thousands of citizens and accounted for the disappearance of tens of thousands Guatemalans during the period. The archives facilitated the creation of a United Nations-backed commission to investigate corruption in the country that led to the dismissal of numerous state officials, and more importantly, the archives assured the prosecution of army, police officials, and even the former dictator Efrain Rios Montt for human rights crimes and genocide. The archives thereby drove Guatemala towards transitional justice by taking shape of an independent political entity with the objective of supplementing government accountability and protecting the right of citizens to know.

It should be acknowledged, however, that archives simply on their own cannot function as effective political institutions. The political success and influence of archives are determined by a multitude of administrative, bureaucratic, and political factors such as stable long-term funding, training and experience of archivists, and legal protections against outside interferences. In fact, external interference and pressure on archives can further abet undemocratic practices. For instance, the “information lockdown” that ensued in the United States immediately after the 9/11 attacks involved the United States government removing large amounts of files from its digital archives and reclassifying files that portrayed the government in a potentially negative light. (Cunningham et al., 2013) Hence, in this case, access to data was manipulated by the government to fulfil self-serving needs that were against the democratic interests of the citizens. Hence, archives cannot stand alone and protect a populace’s democratic interests: archives need to be safeguarded by legal protections in order to maximise their democratic productivity.

Another significant way in which archives function as political institutions is by empowering people groups confronting identity insecurity, which refers to a sense of uncertainty about one’s self-perception. Identity insecurity on a community level is often attributable to political events that engender some form of cultural suppression or oppression. A resonant illustration of identity insecurity at a community level are the Tibetan people. Tibetans in the region of Xizang have faced cultural genocide since the Chinese invasion of the region in 1959. Mandarin is asserted as the language of instruction in all primary schools in an attempt to gradually erase the Tibetan language and religious texts are routinely confiscated. The Chinese government has also demolished Larung Gar, the world’s largest Tibetan institute. (The Diplomat, 2017) The amalgam of these repressive policies has resulted in a Tibetan community desperate to understand and hold onto its culture: an aspiration that a public archive is now helping them fulfil.

The examination of the function of archives in devolving access to data to the general public, assisting transitional justice, and empowering culturally-oppressed people groups paints archives as multi-faceted democratic instruments that defend citizens’ rights and freedoms in unique ways. The validation of archives as political institutions raises further questions about its incorporation in mainstream political frameworks. Additional spheres of interest include determining the ethical balance between privacy concerns and wide accessibility of digitised public data and whether archival diversity and access in a state can be potentially good indicators of democratic governance. Ultimately, at the heart of discourse about the role of archives as potential political institutions, lies the inextricable link between knowledge and power.

“Aims and objectives.” Library of Tibetan Works and Archives., https://tibetanlibrary.org/aims-and-objectives/

Bequelin, Nicholas. “The Dark side of the China Dream: Erasing Ethnic Identity.” The Diplomat.,https://thediplomat.com/2018/08/the-dark-side-of-the-china-dream-erasing-eth nic-identity/

“Postcustodial.” Dictionary of the Society of American Archives., https://dictionary.archivists.org/entry/postcustodial.html

Shaw, Steve. “China Tears Down the Tibetan City in the Sky.” The Diplomat., https://thediplomat.com/2017/08/china-tears-down-the-tibetan-city-in-the-sky/

The author, Aarti Malhotra, is an undergraduate student of the Department of International History at London School of Economics and Political Science.