Journalist and World Economic Forum Young Global Leader Nabila Ramdani is currently finishing a PhD at LSE focused on the Egyptian Revolution of 1919. She was a recipient of an Emirates PhD Support for Middle East Studies Award, supported by the Emirates Foundation for Philanthropy and run through the LSE Middle East Centre. In her most recent research, she has been looking at the role women played in that revolution and sees parallels with the women’s movement in Egypt today.

The role of women in Arab revolutions is a subject which could not be more important at the moment. Egypt, the most populous country in the Arab World, has just gone to the polls to elect a president for the first time in its 5000 year history. For the 50 million people eligible to vote, the expectation is a democratic government replacing years of dictatorship, but for at least half of those voters such ideals are a long way off: despite playing a crucial part in the 18-day uprising which ended Hosni Mubarak’s rule in February 2011, women remain marginalised, if not ignored altogether.  There are just 12 women MPs out of a total of 498. This translates into female representation of 2.4 percent compared to an already extremely low United Nations world average of 19 percent. The 13 original candidates in the presidential race were all men.

Such statistics have particular resonance for me as part of my PhD focuses on the role of women in Egypt’s 1919 revolution. As they did last year, women played a momentous role in the revolt against British rule, but found themselves sidelined by the nationalist Wafd party after Egypt was granted nominal independence in 1922. The foiled legacy of Huda Shaarawi, who launched the Egyptian feminist movement a year later by publicly removing her veil, now continues into the 21st century. Those who followed the 2011 revolution on their TV screens will remember how women played a prominent part in the mass demonstrations, not least of all on Cairo’s Tahrir Square. One chapter in my dissertation examines how women in Egypt took to the streets for the first time ever, asserting themselves as formidable enemies of the British Empire and how this nationalistic dissent was transformed into a bona fide feminist movement.

The formation of a feminist consciousness in Egypt ran in parallel with the country’s rapid development as a modern state at the start of the 19th century. Technological advancements within Muhammad Ali’s increasingly capitalistic, secular country were accompanied by burgeoning intellectual thought among all sections of society, including women. The whole nation was united in criticising the way the occupying British had used their country for their own ends, demeaning the interests of the indigenous population, from the peasant masses up to the educated elites. This gave rise to numerous variations of Egyptian nationalism, all of which were eventually to play a part in getting foreign dominators to leave the country, so seeing at least nominal native rule introduced.

The feminist element to this movement was both vocal and powerful, as women rallied under the ‘Egypt for the Egyptians’ slogan. Nationalism was certainly an obvious vehicle for feminist demands. So it was that two dynamic and overlapping groups – nationalists and feminists – combined to create an impressive campaigning force – one which would have a compelling effect on the progress of Egyptian society. Radical demands being made by a pioneering women’s movement strengthened the nationalist cause. In turn, feminists gained from their close association with the nationalists, using their connections to build up their own power base.

But, after Egypt won nominal independence, many of the male nationalists who had assisted those fighting for female equality became less enthusiastic about the cause. It soon became clear that the men who had once provided so much grassroots help and advice to the women’s movement were not sufficiently supportive of the motivations of their feminist compatriots. Their interest waned and, indeed, disappeared altogether in many cases. Feminists learned a crucial lesson from this development – they could only really succeed if they established their own independent political movement. This pressure group ideally needed to be one with a single aim. In short, feminism had to stand alone from other political causes, and also had to break links with rival ideologies, whether it was Islamic, secular or modernist. It thus became essential for the feminist movement to be a dynamic, reforming movement of its own.

In my research, I have been examining how such a movement took shape in Egypt at the end of the 19th century, with the appearance of women’s journals expressing the feminist cause. The narrative in my dissertation traces its progress up until the early 1920s when the Egyptian Feminist Union (EFU) was formed and follows a female, middle-class literary culture which was indelibly associated with the rise of a nationwide feminist consciousness. I have also been exploring the important role male intellectuals had in the turn-of-the-century debate on women’s place in society.  As I see it, the women’s movement increased its strength by growing up in parallel with the Egyptian nationalist movement of the 20th century. I’ve found in my research thatelite women who were responsible for organising the movement politically were able to alternate and, indeed, mix up secular, Islamic, and modernist ideologies. Finally,  it is important to note that women of all classes became crucial political players in the country’s struggle for independence from the British. Further, the activism of the elite women, which started out playing such an important part in the nationalist cause, was gradually separated from it so that it could plough its own furrow through history.

What appears certain is that the early modern feminist thinkers in Egypt did not necessarily come to the same conclusions about the main issues at stake or, indeed, the means to achieve their goals. Ignoring sectional differences, my references to the ‘women’s movement’ of the time concerns the overall evolution of women’s thought and action during this extremely turbulent period. As anyone looking at the situation today will agree, the lessons of the past are as relevant as they ever were.

Nabila Ramdani is a Paris-born freelance journalist and academic of Algerian descent. She specialises in Anglo-French issues, Islamic affairs, and the Arab World. She was named a Young Global Leader 2012 by the World Economic Forum and was a winner of the inaugural European Muslim Woman of Influence Award in 2010. Her website can be found at http://www.nabilaramdani.com/ and you can follow her on twitter @NabilaRamdani 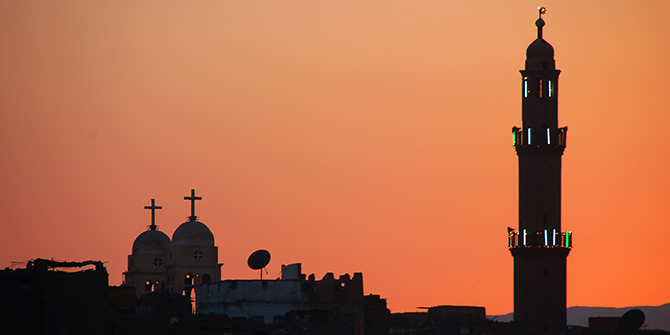 Bad Behavior has blocked 1082 access attempts in the last 7 days.