Holding the world’s largest reserves of natural gas, Iran was expected to become a large-scale exporter for many decades. Iranian officials contributed to these expectations by announcing ambitious export targets – for example the goal of a 10%-share of global gas trade, put forward repeatedly. Only in the past decade, Iran announced new export projects with a total volume of 153-158 billion cubic metres per year (bcm/y) – roughly five-times the size of the once planned Nabucco pipeline. Despite there being demand for at least parts of this volume, however, Iran is in reality a net-importer of natural gas. Imports of 9.4 bcm exceeded the country’s total exports of 8.4 bcm in 2012, according to BP data. The only larger export project, with Turkey at 7.5 bcm/y, is running far from smooth while trade with Armenia and Azerbaijan is marginal. In comparison, Russia, Qatar, Norway, Canada, and Algeria – the world’s top five exporters – are each exporting more than 50 bcm/y.

Two questions arise from this: What is responsible for Iran’s failure in becoming a major gas exporter (i.e. exporting more than 50 bcm/y)? And is this situation likely to change in the future?

At first, it might appear that sanctions are obviously responsible for this outcome. But until 2010, these only had a very modest impact. Before then, Iran enjoyed access to international banking with European companies like ENI or Total actively engaged in Iranian gas projects. Therefore, in order to understand Iran’s absence from the international gas markets, one needs to also analyse the domestic situation.

Structurally, factionalism in the political economy is impeding the policy-making process. In contrast to the oil- and gas-exporting monarchies of the Arabian Peninsula, which all have a relatively small power centre, the fragmented Iranian political economy is complex and diverse. As the interests of several power centres need to be taken into account when introducing policies, there is an institutional bias in favour of possibly short-term factional interests at the expense of the long-term national interest.

The subsidisation of energy is a good example for this. For many decades, subsidies held back investments and triggered domestic over-consumption as well as extreme energy inefficiency. Amongst others, this caused an extreme level of gas flaring and losses of more than 37 bcm combined in 2011 (which is more than the total annual consumption of countries like Australia, Brazil, Poland or Spain). In 2010, subsidies amounted to more than $80 billion or 23% of the Iranian GDP, representing the highest MENA figure both in absolute and relative terms. A result of this is that Iran does not have a sufficient spare capacity to allow for larger exports. As the first country in the MENA region, Iran in 2010 embarked on a subsidy-reform aiming to link domestic prices to an export price index (by 2015 for households and commerce and by 2020 for industry). Statistics show that the rise in domestic gas consumption slowed down in response to the first round of price increases. But due to economic growth and a switch in the domestic energy mix from oil to gas, overall gas demand in Iran is continuing to grow. If fully implemented, the subsidy reform would rationalise Iranian gas and energy use over time and could thus help the country to expand production at a faster rate than consumption. This might allow for the creation of the much needed export capacity. Should Iran wish to achieve this capacity, it is therefore of utmost importance to continue the implementation of the subsidy reform, which was halted by the Iranian parliament in 2012. President Rouhani recently signalled his intention to work towards this direction.

A further hurdle for gas exports are objections to foreign participation in Iranian energy. Due to the historically exploitative experiences with foreign companies, until very recently Iran did not allow foreign ownership in the energy sector. As a result, the role of any foreign company was reduced to that of a service provider. This did not prevent business with Iran but it reduced its attractiveness and thereby the scope of investment and co-operation.

Finally, there are also a number of policy and institutional conflicts. Amongst others, it might make more sense for Iran to use its gas domestically – for example as a feedstock for industry – instead of exporting it. The internal debate over this question is on-going and did not yet reach a conclusion. Institutionally, there is potential – and necessity – to improve co-ordination among the Ministry of Petroleum and the National Iranian Oil Company (NIOC) as well as among the various NIOC subsidiaries in the gas sector. Moreover, several gas price negotiations have been used as a playground for domestic power struggles between various factions and political institutions. This questioned Iran’s reliability as a trading partner.

Against the backdrop of these challenges, is it possible that Iran can turn past failure into future success when it comes to the export of natural gas? For this to happen, Iran would ultimately need to both achieve a sufficient export capacity and find customers for its gas – i.e. conclude contracts.

The key to the creation of the much needed export capacity is to increase gas production at a faster rate than domestic consumption. On the supply side, Iran would therefore need to bring the remaining South Pars phases on stream. The prospects for this to happen are good. Only in the past ten years, Iran was able to more than double its gas production with further phases under development. On the demand side, it is of greatest importance to fully implement the subsidy-reform in order to increase efficiency and reduce the growth in domestic consumption.

For the conclusion of international gas contracts, it would be necessary for Iran to stop using gas price negotiations as an arena for domestic infighting. In this regard, it will be crucial to see how the government of the new President Rouhani will establish relations with Iran’s various other power centres.

In conclusion, what level of Iranian gas exports can be expected in the years ahead?

By 2025, it seems realistic for Iran to have increased gas exports to Turkey, Armenia, and Azerbaijan to the contractual levels of 10, 2.3, and 0.5 bcm/y respectively. Pakistan and Iraq could by then have become new customers of Iranian gas with imports of 8 and 7.3-9.1 bcm/y.

The realisation of global export projects, however, would require fundamental change in Iranian-Western relations. With the current EU and U.S. sanctions regime in place, both the attractive European gas market as well as the latest liquefied natural gas (LNG) technology are effectively out of reach for Iran.

Therefore, it is certainly not until the 2030s that Iran can be expected to become a large-scale exporter with exports of more than 50 bcm/y. Several domestic and international challenges will need to be addressed before Iran is to compete with countries like Russia or Qatar in the international markets.

This is a synopsis from a study on the question of Iranian gas exports.

David Ramin Jalilvand is a Doctoral Candidate and Research Fellow with the Berlin Centre for Caspian Region Studies (BC CARE) at the Free University of Berlin. He has previously obtained an MSc from LSE. His main research interests are energy and international politics in the Greater Middle East.

Posted In: Iran | Reports from the Ground | Research 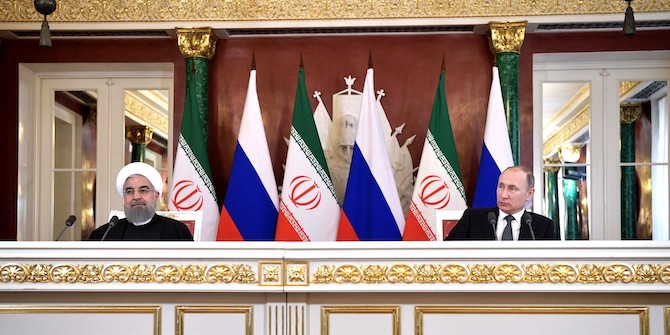 Bad Behavior has blocked 1158 access attempts in the last 7 days.