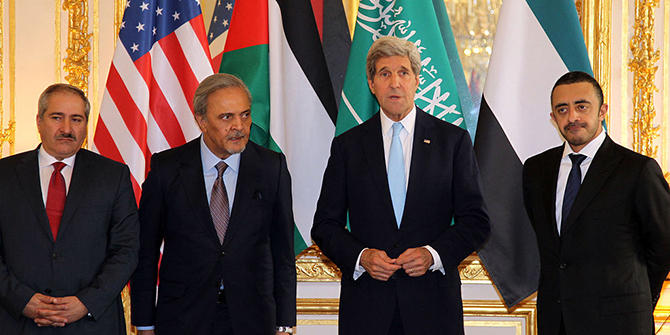 On 7 October 2015, the LSE  Middle East Centre hosted workshop as part of the academic collaboration project ‘Mapping GCC Foreign Policy: Resources, Recipients and Regional Effects’. This workshop is the third in a series of investigations of the changing role of Gulf Cooperation Council (GCC) states in regional security, aid and intervention. The first workshop, held in March 2014, focused on ways of analysing Gulf states’ foreign policies, including a critical review of the theoretical literature and practical approaches to understanding the region as distinctive, but not unique, in its policy objectives and tools of statecraft. Further investigations have focused on both domestic sources of foreign policy making and implementation in the Gulf states, and more structural pressures of the international system and its more powerful actors. The project also seeks to uncover the causal power of ideational change and social movements in the influence of both foreign policy (including military intervention) and foreign aid. The second workshop was co-hosted by Qatar University’s Center for Gulf Studies in February 2015.

A primary aim of this project is to create new scholarly analysis of the GCC states’ respective foreign policies for both academic and policy audiences. At the workshop, participants presented brief memos, which we will upload on our blog over the next week.

Memos presented at the workshop