Protracted conflicts always eradicate social cohesion and tear up communal bonds. Evidence from the ground suggests that while shelters in Yemen can contribute towards building a cohesive society, they also have the potential to provoke tension within communities.

The civil war in Yemen has resulted in a massive humanitarian catastrophe in the poorest country in the MENA region. The Task Force on Population Movement (TFPM) has reported that as of March 2017, 2 million Yemenis, or 7% of the population, is internally displaced. Interestingly, internally displaced persons (IDPs) identify the need for shelter (4%) as a bottom priority compared to food (76%).

According to the TFPM report, the majority of IDPs in Yemen are living with host families (36%), while the next largest category is in rented accommodation (22%), followed by those who are residing in collective centers or spontaneous settlements (19%).

The reason behind these housing setups can be linked to the traditional support mechanisms existing in Yemen, such as the welcoming of IDPs by extended family or friends through sharing the hosts’ space, income and resources. In addition, when talking to IDPs, they clearly expressed their preference for staying with host families mainly because it gives them better chances of finding income-generating opportunities.

As an example from the field, male IDPs who were staying in a school in Ibb governorate could not leave their families alone during the day because of the presence of young male students. That forced them to  miss out on job opportunities. In addition, the school management and the host community were trying to oust the IDPs from the premises because, according to them, the presence of female IDPs at a teenage boys’ school distracts students, and provokes conflict among the students’ parents and IDPs.

Despite the fact that the tradition of hosting vulnerable displaced families in Yemen shows the strength of social bonds, they are not sustainable and are likely to result in serious repercussions on the social cohesion of the Yemeni society. According to Shelter Cluster Yemen, families hosted by friends and relatives report that an increase in interfamily tensions.

Often, host families are poor themselves and financially over-stretched, especially with the shortage of humanitarian aid for host communities who take the greatest brunt of caring for IDPs. Unfortunately, humanitarian organisations are in favour of pouring humanitarian assistance to IDPs in designated camps or to those in households in public or abandoned buildings. In doing so, they are neglecting the surrounding host families. The provision of assistance solely to IDPs in camps will increase the tension between host families and hosted IDPs on one side, and with IDPs in camps or public buildings on the other.

For example, in Dhahdh IDP camp in Khamer district, the host community blocked the delivery of humanitarian aid to the camp. It all started when Muhamasheen IDPs were displaced from Saada’a governorate to a land in Khamer district in 2015. The Muhamasheen are a minority social group in Yemen and are marginalised, especially in the northern part of the country.

One INGO negotiated with the landlord to allow the IDPs to temporarily stay on his land. However, humanitarian organisations kept providing this camp with aid without taking into consideration two main issues. First, the fact that the camp is temporary, and that with the influx of assistance, IDPs will refuse to leave this agricultural land, leading to confrontation with the landlord. Secondly, the fact that the surrounding area is populated with very poor households, some already hosting IDPs, who were deprived of any assistance. A few months later, a conflict erupted between the landlord and other tribal men on one side and the IDPs on the other. The host community has since prevented humanitarian organisations from entering the area under the pretext that the Muhamasheen were culturally and ethnically different and that humanitarian organisations were fiercely trying to impose Muhamasheen IDPs on them.

Humanitarian organisations have a responsibility towards communities to ensure social cohesion and to apply a conflict-sensitive approach in their humanitarian assistance. There is no one size-fits-all template to delivering humanitarian assistance. Every country has different mechanisms and social norms of supporting vulnerable people and of applying resilience mechanisms to cope with displacement. It is essential to understand the communities to ensure no harm is caused through humanitarian intervention. In Yemen, host families shouldn’t be excluded from aid, as doing so may cause tension and disturb social harmony.

Ghaidaa Motahar is Gender and Social Cohesion Specialist, with a Master’s degree in Political Science from Warsaw University. She tweets at @GhaidaaMotahar.

Mohammed Al-Sabahi is a practitioner and lecturer of development and humanitarianism. He has a Master’s degree in International Development from the University of Bristol. He tweets @SabahiMohammed.

The views and opinions expressed in this article are those of the authors and do not necessarily reflect the official policy or position of their institutions. 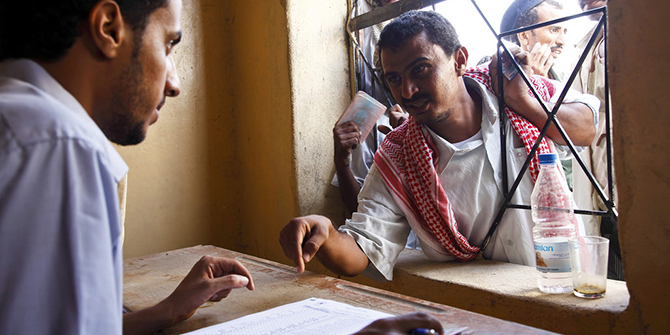 Bad Behavior has blocked 5002 access attempts in the last 7 days.