With an overemphasis on return and resettlement, local integration should receive greater consideration as a solution, especially when people have been displaced for long periods of time and may prefer local integration over return or resettlement. Even for Syria, it is never too soon to begin thinking about and setting the stage for durable solutions. An increased understanding of processes that enable durable solutions can be instrumental to – eventually – facilitating such solutions for displaced populations in the longer term.

Working towards durable solutions would mean the gradually diminishing of the displaced persons’ needs and vulnerabilities, while at the same time strengthening their capacities, skills, and resilience. In turn, this would help people to increasingly enjoy human rights without discrimination based on their displacement. However, long-lasting and prolonged periods of displacement make it slow and challenging to achieve durable solutions for internally displaced people, who may be caught in protracted situations for years or even decades.

Local integration lacks a formal definition in international refugee law but it can be understood as ‘ending exile by allowing refugees to become full members of their host community in their first country of asylum’. The 1951 UN Refugee Convention provides a legal framework for the integration of refugees and articulates the obligation for the first countries of asylum to ‘facilitate the assimilation and naturalisation’ of refugees. States should make every effort to ’expedite naturalisation proceedings’. Unfortunately, the refugee convention does not apply to Syrian refugees in Syria’s neighbouring countries, where the convention has not been signed and ratified without limitations. Jordan, Lebanon and Iraq have not signed the 1951 Refugee Convention. Turkey has signed the convention but maintains a geographic limitation which avoids its application to Syrian refugees in Turkey. Based on International Customary Law these countries have moral obligations to respect refugee rights, but do not always chose to do so due to domestic considerations. For example, neighbouring countries have concerns around the negative economic impact of refugees and asylum seekers and choose not to view Syrians as refugees but rather as ‘guests’ who will eventually leave. Another widespread belief is that the refugees could pose a threat to national security, as people may have been affiliated to terrorist groups. Also, popular discontent over the presence of large numbers of refugees have made many governments reluctant to accept local integration of refugees as a durable solution.

For the local integration of internally displaced persons (IDPs), there is no formal international law except for the international ‘soft law’ which led to the UN Guiding Principles on Internal Displacement, adopted in 1998. The Guiding Principles identify IDPs’ needs and rights, and seek to guarantee their protection and assistance during and after displacement. It states that IDPs cannot by discriminated against as a result of their displacement. It is stipulated that ‘displacement shall last no longer than required by the circumstances’ and that ‘every internally displaced person has the right to liberty of movement and freedom to choose his or her residence.’ This includes IDPs’ right to be protected by the state against forcible return by any actor to any place where their life, safety, liberty, and/or health would be at risk. When people are internally displaced, they remain legally under the protection of the national authorities of their home country whereas refugees receive no immediate protection from their state of origin because they have fled the country. In theory, IDPs should therefore enjoy the same rights as the rest of the population in the country. However, when displacement is caused by conflict, the State may be unable or unwilling to protect all its citizens’ rights. This naturally obstructs the progress towards achieving durable solutions as the primary responsibility for providing solutions for IDPs needs to be assumed by the national authorities. Clearly, this is problematic in Syria where safety and security are not guaranteed and where the state’s top priority is not protecting IDPs.

Is local integration for protracted IDPs really a choice? Some IDPs who have no prospect of returning to their place of origin in the foreseeable future may choose to integrate locally for the time being, while awaiting the prospect of an eventual return. Hence, staying at the place of displacement might be a temporary solution or a last resort. Therefore, local integration should always be discussed and assessed together with the availability of the other two durable solutions: voluntary safe return and resettlement elsewhere. It might be that the security situation in the area of origin limits IDPs’ ability to return, or that IDPs may not have the means to relocate to a third location. Due to poor facilities, infrastructure and damaged properties at the place of origin, IDPs may refrain from going back and making new investments to restore former homes. IDPs may lack the ability to travel to their former homes because their lives would be at risk when crossing frontlines or war zones. Furthermore, IDPs may also not have the opportunity to seek refuge outside the country. With the effective closure of Syria’s international borders in 2016, Syrians also encountered new barriers to seeking asylum abroad or potentially third country resettlement.

Voluntariness is the cornerstone of international protection. Voluntariness implies a free and informed choice, absent of any physical, psychological, or material pressures or risks. In other words, IDPs’ decision to locally integrate would not be voluntary if circumstances do not leave any other alternative, if they lack access to adequate information, or if they stay in a context where many pull and push factors force them to stay.

Whatever a displaced person’s preferred and pursued durable solution is, it is important that it is rights-based, sustainable, feasible, viable and based on his or her own preference and genuinely voluntary choice. Ideally, for protracted IDPs, achieving durable solutions is based on human rights and anchored in the political will and leadership of key actors, while displacement-related vulnerabilities and risks are reduced with external support. This means that even if IDPs regard their stay as temporary and await an opportunity to return or permanently settle elsewhere in the country, external support is key to their survival or prospect of living in safety and dignity.

This is an abridged version of a paper given at a conference on Responses to Displacement in the Middle East, held at the LSE on 30 November 2017. See below for the full list of papers. The content of this blog is the sole responsibility of the author and cannot be regarded as reflecting the position of the DSP.

Simon Verduijn has a background in Public Administration and Organisational Science and holds a PhD (2014) in Policy Sciences. In 2015, he moved to Jordan and worked as a Regional Program Advisor to support ZOA’s (an international aid agency based in the Netherlands) strategic humanitarian programming for refugees and IDPs in Syria, Jordan, Lebanon, Iraq, and Yemen. In August 2017, Simon joined the Durable Solutions Platform (DSP) as Analyst. He currently supports research to generate knowledge and promote dialogue on the long-term future of displaced Syrians. He tweets at @sverduijn 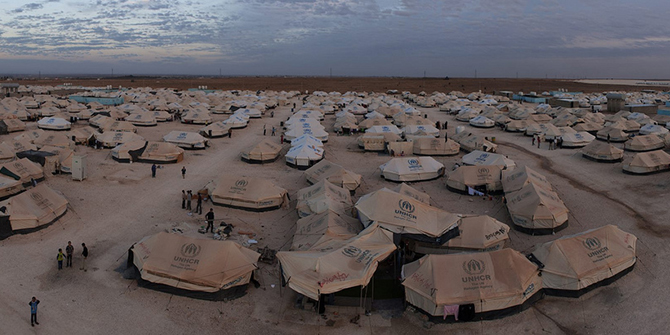 Bad Behavior has blocked 1245 access attempts in the last 7 days.