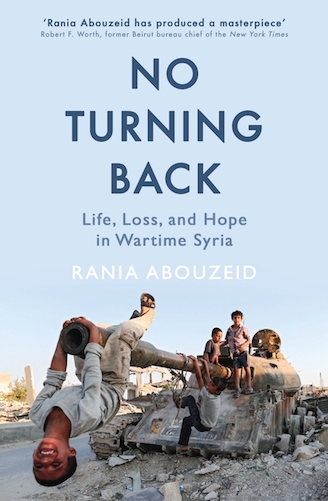 Early massacres and regime-condoned sexual attacks against women have been cited as reasons that changed a people’s nonviolent movement into a proxy sectarian war. Murkier still are the mechanics of violence – the nuts and bolts of gunrunning, militia financing and the rise and fall of armed groups. In No Turning Back: Life, Loss, and Hope in Wartime Syria, reporter Rania Abouzeid draws on long-term relationships she cultivated with opposition sources from in Northern Syria, from 2011 to 2016, to show how rapidly a co-opted revolution militarised.

The book opens with a predominately male ‘List of Characters’. People like Suleiman Tlass Farzat, an undercover protestor and mobile phone filmmaker from a prominent Sunni clan that supported the regime, in Rastan, and Mohammad from Jisr al-Shughour, an early gunrunner, Islamist sympathiser and former detainee, are not the obvious names to emerge from the conflict.

Yet their stories, among many others, told in interweaving chapters throughout No Turning Back illuminate pivotal moments in the Syrian conflict.

In its own prisons, the regime effectively seeded an armed Islamic opposition.

In 2011, a former cellmate of Mohammad’s, Islamic legal scholar Abu Othman was still serving time with men from the Muslim Brotherhood, Fatah al-Islam and al-Qaeda in the notorious prison known as the ‘Palestine Branch’ in Damascus. He thought something was up outside but didn’t yet know. His suspicions were confirmed when 18-year-old Mohammad Ayman Alkrad from Daraa landed in his cell.

The teenager, arrested for graffiting anti-Assad slogans on a school wall, said he had only played football near the offending writing. He had been tortured. But as the hardened men in Abu Othman’s cell told Alkrad, at least he was alive.

Soon after Abu Othman was transferred to Sednaya prison, he and other Syrian Salafis, some of whom had fought against US forces in Iraq, were released under Amnesty Decree No 61. The ‘Sednaya graduates’ became Bashar al-Assad’s wild card and free pass. Their release, as Abu Othman admitted, ‘would allow the regime to say to the world, “Look at the terrorists.”’ In truth former detainees had begun organising in secret.

Other ex-prisoners also held prominent positions in the war. A Syrian, Abu Mohammad al-Jolani spent six years in Camp Bucca, the same US-run detention centre in southern Iraq near Kuwait where the Iraqi leader of the Islamic State of Iraq, Abu Bakr al-Baghdadi, was held. Although the two men didn’t know each other there, al-Jolani, who became the leader of Jabbat al-Nusra and al-Baghdadi, the future self-proclaimed ISIS caliph, would end up fighting on opposite sides of Syria’s Islamist divide.

The book’s accounts of women and girls – 9-year-old Rula from Saraqab and later the kidnapping of Alawite women by rebels – seem peripheral to the real action of men and war.

If Egypt’s revolution was Facebooked, Syria’s was YouTubed. Both citizen-journalists and militias took advantage of social media. ‘Explosions caught on camera,’ wrote Abouzeid, ‘could fetch a million Syrian pounds if it impressed the right private sponsor.’ There were other vital lessons for hard men of Syria regardless of religion, nationality or affiliation: they had to test bullets before buying them – some were blanks – and make sure second-hand rocket-propelled grenades smuggled from Iraq worked.

Soon the rot set in: ‘the same corrupt men who were trying to kill them’, Abouzeid pointed out, also sold them weapons. She visited bomb-making workshops and sat in on arms deals. At the end of No Turning Back she said she could have written another book just on weaponry – usually the preserve of male reporters like CJ Chivers of the New York Times.

Instead 150,000 words and five years worth of reporting, some of which appeared in articles for Foreign Policy, Time magazine and the New Yorker, were edited to 60,000. The narrative is particularly dramatic in chapters about Suleiman Tlass Farzat, incarcerated for over two years. He kept notebooks in prison and had a memory for detail. He somehow survived torture – as he was moved between Assad’s many detention centres, each time assured by his captors of his imminent release. Freed during a 2014 summer amnesty for political prisoners, he arrived in Germany and phoned the reporter.

Abouzeid, from a Lebanese family that emigrated to Australia, presently lives in Beirut. Because of arrest warrants held against her by the Syrian government for activities before journalism, she was forced to sneak over the border from Turkey and cover the opposition. She states she alone did her ‘own fixing, translating, transcribing, logistics, security, research and fact checking’ – a self-reliance admired by Channel 4 News’ Lindsey Hilsum.

Abouzeid’s list encapsulates the working practices of a war correspondent, the subject of essays by and interviews with journalists covering Middle East hot spots in Journalism in Times of War, edited by Awad Joumaa and Khaled Ramadan.

The handbook, according to publisher Al Jazeera Media Institute, ‘opens a window inside the work of Arab journalists, editors and fixers, that have seen war and conflict in the region not only first-hand, but from a quite different standpoint as it is sometimes their own city or neighbourhood…they have to report on.’

The chapter ‘Tip Boxes’ offer pragmatic advice: don’t run from shelling, lie on the ground where you are; or in a city of armed groups, hide photographic equipment. Also useful is the essay on cyber-security and news verification by Christiaan Triebert and Hadi al-Khatib.

Too often in battle-zones, people’s lives are obscured by the violence. No Turning Back by Rania Abouzeid and the stories and films of Zaina Erhaim provide much needed platforms for Syrians bearing witness to a long, intractable war. 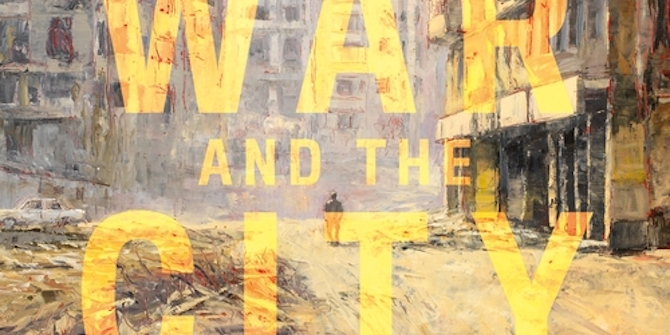