The Qaboos era: From war in Dhofar to oil-fuelled development

Following the death on 10 January of Sultan Qaboos, ruler of Oman for 50 years, the years-long speculation over the succession finally came to an end with the opening of the Sultan’s sealed envelope, and the naming of his cousin, Haitham bin Tariq as the new Sultan of Oman. As Qaboos was carried in the funeral cortege – in the same military vehicle as he entered Muscat in 1970 at the height of the Dhofar Rebellion in the country’s south – the region and the world had cause to reflect on the implications of the passing of a ruler whose long rule was often marked by Oman facilitating dialogue between states and parties locked in diplomatic conflict or even all-out war. Muscat was a conduit for communication between Iran and Iraq during the Gulf War, Israel and the Palestinians, , combatants in Yemen, and the United States and Iran. Helping first to secure the release in 2011 of American hikers held by Iran, Oman subsequently facilitated secret meetings in Muscat between American and Iranian officials during the Obama presidency which eventually led to the JCPOA (Joint Comprehensive Plan of Action), otherwise known as the Iran nuclear deal. This agreement, which had seemed to have de-escalated tensions around the Iranian nuclear programme until President Trump angrily declared it a ‘bad deal’ and subsequently withdrew US participation, as part of his policy of ‘maximum pressure’ on the Islamic Republic.

Over his five decades in power Qaboos developed from an inexperienced cadet to a ruler who carefully calibrated the management of domestic dissent and Oman’s exposure to the swirling currents of regional conflicts through his foreign policy, in ways  calculated to support his regime’s survival. This was a regime in which he was so personally identified as the builder and embodiment of the contemporary Omani state that Marc Valeri fittingly dubbed it  ‘The Qaboos State’.

Qaboos overthrew his father Said bin Taimur in a palace coup d’état on 23 July  1970 (during the height of the Dhofar war), with the support of British officialdom and one Sandhurst classmate in particular, Tim Landon. One of the first priorities of the new regime was to win the war in Dhofar against the People’s Front for the Liberation of Oman and the Arabian Gulf (PFLOAG). Reflecting the long ties with Britain this was achieved with British command of the Sultan’s Armed Forces as well as significant support from the Shah of Iran. Qaboos established his rule and consolidated his authority in Oman, eventually eclipsing his uncle Tariq bin Taimur, who became Prime Minister. Tariq had quite a different vision for Oman from Qaboos, leaning towards a vision more along the lines of a constitutional monarchy. At one point the Omani representative to the United Nations received two different instructions as how to vote from Qaboos and Tariq. When Tariq resigned in 1971 Qaboos became his own Prime Minister, Foreign Minister and Defence Secretary, positions he retained until the day he died. In contrast to the other Gulf state rulers Qaboos occupied a position alone at the apex of authority. Whilst he engaged in a number of top-down reforms to widen participation in various way citing the Ibadhi tradition of shura, the regime kept power through coercion, with some describing Qaboos as ‘a moderniser with an iron fist’. Using the oil revenues which began to flow in the late 1960s, Qaboos oversaw the transformation of Oman from an impoverished nation with just three schools into a modern state built by oil-fuelled modernisation programmes in civil engineering, health and education. Furthermore, at the time of the Dhofar war it was not insignificant that Qaboos had a Dhofari mother, further helping to project his mantle as a unifying ruler. Part of the way that Oman has been able to leverage its regime survival strategy has been through the intersection of its domestic modernisation initiatives with its distinctive foreign policy stance, where it has accrued some significant strategic real estate.

Oman’s foreign policy positions are partly sustained by its strategic importance deriving from its sovereignty over the Musandam Peninsula (separated from the rest of Oman by the United Arab Emirates), an area including majestic sea cliffs that overlook  the shipping lanes through the Straits of Hormuz, through which passes around a sixth of the world’s oil supply.  It is inhabited by the Shihuh tribe, some of whom speak the endangered language Kumzari. Omani sovereignty over this peninsula and British involvement in the articulation and retention of such control is a recurring theme through the decades. Surveyed by British adviser Bertram Thomas in the 1920s, in the form of a hand-drawn sketch map of tribal feudatory allegiances, Muscat’s authority was backed up in 1930 against rival sheikhs by the persuasive techniques of HMS Ormonde and HMS Lupin. In December 1970, months after Sultan Qaboos successfully deposed his father, the British government approved Operation Intradon in which the SAS parachuted into the Musandam in order to secure the area for Sultanate authority and carry out a ‘hearts and minds operation’. It is possession of this key piece of territory – giving control over a chokepoint of the global economy – that when combined with skilful diplomacy has aided Oman to ‘punch above its weight’ and navigate an independent position in regional affairs. Surprisingly, there appears to have been little sustained social investment in the area and the oft-promulgated official narrative of an Omani tradition of tolerance and diversity seems to be in rather short supply when it comes to the Shihuh of Musandam, which has led to questions being raised in the UK Houses of Parliament.

Foreign policy as regime survival strategy: ‘Friend of all, Enemy of None’

Omani foreign policy, often characterised as independent or neutral (Oman is sometimes referred to as the Switzerland of the Middle East), can be unpacked somewhat further. Oman has assiduously retained a close relationship with a core Western power as a guarantor of regime survival, whilst also balancing this relationship with other Western and global powers. Further, through its policy of not taking sides in regional conflicts (it remained neutral in the Saudi-led boycott of Qatar), combined with its facilitation of dialogue between conflicting states and groups, it does not expose itself to the risks of incurring dangerous enmities. In recent years, as the de facto rulers of Saudi Arabia and United Arab Emirates have sought to reshape the region’s political landscape, there has been some irritation with Oman’s independent foreign policy as part of a perception that ‘If you’re not with us, you’re against us’. Most likely any pressure on Oman will be articulated in various ways by the UAE. Oman’s difficult economic situation, with high levels of public debt, leaves it possibly vulnerable to financial inducements or pressure. During the Omani manifestation of the Arab Spring, with protesters massing in Sohar and Dhofar, the Emirates loaned Oman billions of dollars in order that the authorities could attempt to ‘buy off’ social discontent with government jobs and subsidies as Qaboos refused to countenance any more fundamental opening up of debate on political participation.

The rentier social contract in Oman: Reward and repression

Oman does not have the hydrocarbon resources of its neighbours and even under current projections will exhaust its reserves in the next couple of decades. Coupled with this is a rapidly growing young population who have reasonable expectations of employment and improved working conditions. Although its hydrocarbon reserves are relatively low, Oman displays a number of the characteristics of the rentier state model and accompanying social contract: the receipt by the state of revenues accrued from the sale of oil on the world market  lessened the need for the Sultan to reach participatory political accommodations with other social groups, allowing reward for elite groups and general population  in the form of government contracts or jobs and social benefits in return for political quiescence. Where dissent to this social order manifests then there is a well-rehearsed play book of shuffling of the cabinet, concessions, co-option or coercion. Prison sentences or death penalties are commuted and those who see the error of their ways can return to the fold, whilst government critics face escalating harassment and a crack down in a new penal code. In the medium- to long-term it might be that the exhaustion of revenues from the sale of hydrocarbons on the world market will induce Sultan Haitham or his Al Bu Sa’idi successor, confronted by the frustration of youth, to contemplate moves to some form of a constitutional monarchy, as was considered by his father, the former Prime Minister Tariq bin Taimur.

In the passing of Qaboos and the arrival of Sultan Haitham there are already many indications of continuity, particularly in foreign policy, though it is unlikely he will govern alone on the throne in the same way as Qaboos. The challenges that exist are well documented: firstly, in terms of the government’s large budget deficit, and secondly the inexorable depletion of hydrocarbons, meaning that Oman will likely be the first larger Gulf state to move to the post-oil era placing ever greater emphasis on economic diversification initiatives. Haitham was tasked by Qaboos with directing the 2040 programme ostensibly meant to prepare Oman for this transition. The medium- and longer-term choices that this might pose for the Al Bu Sa’idi ruling family and the Omani people, particularly the younger generation, are in the nature of increased political participation, good governance and human rights.

In the shorter term, the coming weeks and months may witness opportunities for regional and global states to see if Oman can be drawn nearer into their orbit. As Kristian Coates Ulrichsen notes, the Saudi blockade challenge to Qatar came within weeks of the accession of a new Emir in Doha. That said, Sultan Haitham has already pronounced that he will continue the foreign policy of ‘neutrality’. Even as a strategy for regime survival, Sultan Haitham’s statement that he intends to continue Oman’s role as a facilitator of dialogue and quiet diplomacy between parties in conflict is welcome news indeed in a time when a nefarious band of reckless, unhinged personalities in the Middle East and the wider world are exercising power and influence, seemingly unfazed by the perils of escalating conflicts and the cost in cultural treasures and human lives.

Francis Owtram is an Honorary Research Fellow at the University of Exeter and is the author of A Modern History of Oman: Formation of the State since 1920 (IB Tauris, 2004). He is currently researching the modern history, political economy and international relations of Oman for a number of publication projects. He tweets @francisowtram 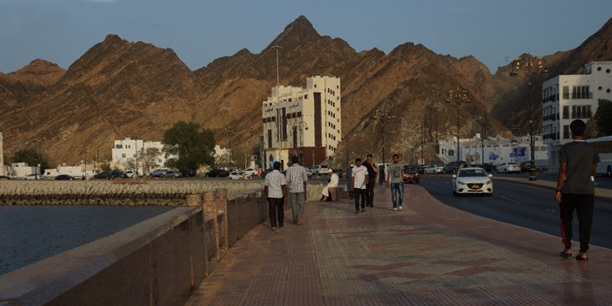 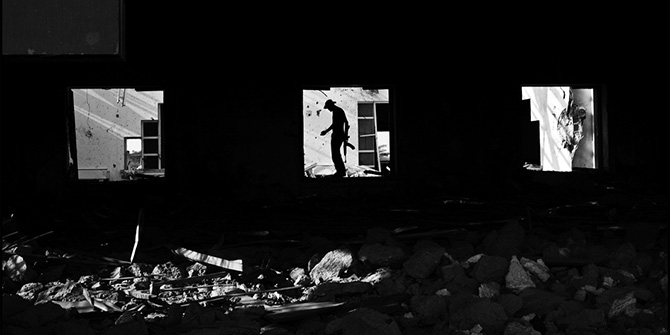