In February 2022, the Israeli government published a new ‘Procedure for entry and residence of foreigners in the Judea and Samaria area’ (Israel’s name for the occupied West Bank). The procedure, which takes effect from 20 May 2022, threatens the autonomy and academic freedom of Palestinian universities. It gives the occupying military authority, the Coordination of Government Activities in the Territories (COGAT), the power to control which foreign academics and students visit (or reside in) the West Bank. Applicants for permits are required to submit applications to the Israeli representative office in their country and may be called to interview (a compulsory requirement for foreign students). For those issued with a permit, COGAT is given powers to require payment of a ‘guaranty’ (up to and exceeding 70,000 NIS, or £16,500), which can be confiscated for non-compliance with permit conditions.

For foreign academics visiting or working in the West Bank, COGAT now determines appropriate qualifications and permit terms. Particularly striking is the power given to COGAT to determine how many ‘distinguished researchers’ may be invited by Palestinian universities, and what they may lecture on. The new procedures impose a quota of 100 foreign lecturers ‘in necessary fields’ for the whole higher education sector in the occupied West Bank (Appendix A). A COGAT official decides whether to issue a permit if the lecturer is considered to ‘contribute significantly to academic learning, to the Area’s economy, or to advancing regional cooperation and peace’ (p.32).

The new rules also restrict the length of contract Palestinian universities may offer foreign academics: no longer than 27 months and no more than five non-consecutive years in total. In a public statement, Birzeit University have outlined how this will prevent the sustainable hiring and promotion of foreign faculty, negatively impacting academic programmes and collaborative research projects. This further exacerbates a situation in which academic freedom is already under assault: between 2017–19 seven international faculty members at Birzeit University were forced to leave because Israel refused to renew their visas. In 2019 another two foreign academics who had signed teaching contracts at Birzeit University were denied entry to Israel.

The change in procedures will likely undermine the collaborative research with Palestinian universities we undertake at the LSE Middle East Centre. Over the past eleven years, as part of the Academic Collaboration with Arab Universities Programme (funded by the Emirates Foundation), researchers from LSE have undertaken nine research projects with Palestinian colleagues on issues ranging from public health and climate change to attitudes to conflict/cooperation. Outputs are published in leading academic journals and peer-reviewed findings are also communicated (in English and Arabic) to wider audiences.

The new procedure for entry is enabled by Israel’s Law 5756/1996, implementing the 1995 Interim Agreement between Israel and the PLO relating to the West Bank and the Gaza Strip (‘Oslo II’). Under Article XIX of that agreement, Israel is required to exercise its powers with due regard to internationally accepted norms and principles of human rights and the rule of law. The right to education, as expressed in Article 13 of the International Covenant on Economic, Social and Cultural Rights (ICESCR), includes an obligation to develop equitable access to higher education. In its 2004 Advisory Opinion on Israel’s ‘separation wall’, the International Court of Justice stated that Israel, as occupying power, is bound by the provisions of the ICESCR and is under an obligation not to obstruct the exercise of such rights in those fields where competence has been transferred to Palestinian authorities (such as higher education).

In its general comments on article 13, the UN Committee on Economic, Social and Cultural Rights noted that the autonomy of institutions of higher education is necessary for academic freedom. Autonomy is defined as ‘that degree of self-governance necessary for effective decision-making by institutions of higher education in relation to their academic work, standards, management and related activities’ (para 40). In recent years Palestinian universities have been buffeted by the violence of everyday occupation, including a large number of students exposed to arrest and prolonged military detention (as of March 2022, 55 students from Birzeit University are under arrest and/or detention by the Israeli military). However, these institutions have still managed to carve out significant autonomy over their academic affairs.

The new entry rules do not apply for academics visiting both Israel and the West Bank, who remain subject to Population and Immigration Authority procedures at Israel’s international border crossings. The additional burdens apply to those academics exclusively visiting or working in the West Bank. To be sure, even the separate civil procedures can be arduous for visiting academics (something I know from personal experience) and students. At least one UK university has abandoned a language immersion option in Palestine for students learning Arabic in their year abroad as a result of capricious visa decisions, including refusal of entry.

I have taught Palestinian students, I have taught Israeli students: they are the same. They share a desire to learn, an aspiration to personal growth, and an expectation to be treated with dignity. I am fortunate to work in a university that is free to host academics and students from around the world. LSE also fosters critical thinking amongst its scholarly community: the freedom to speak truth to power is the mark of an open society. In contrast, COGAT’s Orwellian guidelines do not even name the occupation. COGAT has no legitimacy to make decisions for Palestinian universities.

Dr Michael Mason is Director of the Middle East Centre. He is also Associate Professor in the Department of Geography and Environment and Associate of the Grantham Research Institute for Climate Change and the Environment. His research interests encompass environmental politics and governance, notably issues of accountability, transparency and security. 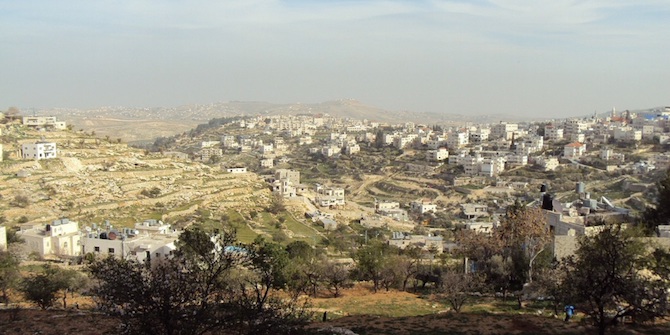 Bad Behavior has blocked 3448 access attempts in the last 7 days.