In this blog Daniel Busacca Dolleo, (MSc in Social and Public Communication, 2020) discusses what motivates privileged people to act in solidarity with disadvantaged or minority groups, drawing on his dissertation research.

In recent months we have observed how the Black Lives Matter movement, reinforced by activists in the US following the murder of George Floyd by police forces, has spread around the globe. Millions of people have gathered on the streets and collectively protested. For many, that violent event represents what Black minorities and People of Colour face on a daily basis: an oppressive system that discriminates against them. But something was different this time around. Unlike many other times in the past, it wasn’t only racial and ethnic minorities fighting for their equal rights, but also a significant number of White people raising their voices and acting in solidarity with the oppressed.

The phenomenon of Allyship
It isn’t new that minorities attract a significant amount of support from members of privileged groups who stand in solidarity with them, often times referred to as ‘allies’. They tend to show a sense of psychological commitment and interest into the experiences and wellbeing of other groups outside of their own. You might have even been an ally in the past yourself, for example, as the straight friend, brother, or sister marching at a pride in support of the LGBTQ+ community.

What motivates the privileged majority to act?
As part of my dissertation I examined the following question: What is it exactly that motivates privileged people to take action on behalf of the disadvantaged? Reflecting on that question almost seemed contradictory to me, since the privileged status of majority groups is based on the oppression of minorities and maintained through the very same existing social inequalities. I contextualised the question within a complex population with a unique history – Germany. Using a social psychological approach, I explored the willingness of the white ethnic German majority to engage in solidarity-based collective action against racism on behalf of racial and ethnic minorities. My research showed that two factors were key in explaining white ethnic Germans willingness to participate in collective action for minorities: their social identity and moral stances.

What is social identity?
Social identity can be described as a person’s sense of who they think they are based on their group membership(s) and the value and emotional significance they attach to that. Groups can give us a sense of social belonging, so we often tend to categorise the world into groups of “them” and “us” (ingroup vs outgroup). Hence, we as individuals, tend to emphasise differences between and similarities within social groups, which can reinforce the emotional attachment to our own in-group. For example, the categorisation into nationalities, sexual orientation, ethnicities or even gender.

But how can a privileged white group identify with an oppressed minority group when they don’t share the same experiences as People of Colour, nor the emotional significance attached to that specific membership? It appears to go against the grain of the idea of a social identity process. Even though it is not necessarily possible to identify with the experiences of the oppressed group, it is possible to identify with each other through shared opinions (so called opinion-based identification).

Opinion-based groups are those whose membership is grounded in shared opinions that take a clear position on a situation or topic. Opinion-based groups emerge and solidify especially when people with fundamentally similar opinions interact and develop concrete strategies to achieve their common goals. This form of opinion-based identification has shown to be particularly effective in predicting socio-political behaviour, commitment, and empowering groups to act collectively on the grounds of their shared opinions. One actionable example of this is by organising or participating in demonstrations and protests. This is particularly so in situations, where according to the group members’ opinion, the status quo needs to be changed.

Moral stances transcend those group boundaries
Unlike social identities, that are linked to group memberships, moral stances appear to transgress these by adopting a universally valid standard. Under moral stances, we typically understand “strong attitudes that are experienced as absolute stances on moralized issues” (van Zomeren, Postmes, Spears & Bettache, 2011, p.737). When those moral convictions are being violated people feel there is a need to defend them against social injustices, for example, by engaging in forms of political activism, participating in protests or signing a petition. As we have seen during the Black Lives Matter or the #MeToo movement, this is particularly the case for political issues, that typically produce a high polarisation of opposing moral stances.

So, what can be done?
To achieve social justice through joint coalitions, it is crucial to identify and understand what motivates collective action that transcends the margins of a distinct group identity. This has particularly important political implications, for example when we aim to mobilize the often criticized “silent majority” among our peers. We still only have limited knowledge of how allies can play a critical role in conflict resolution and peacebuilding processes by leveraging their majority and/or advantaged status. But examples such as men joining forces with women during the #MeToo movement and the current solidarity of White people for the Black Lives Matter movement, suggest that the discourse is finally shifting. It is no longer only disadvantaged minorities that are demanding justice, and fighting for equality, but it is more and more expected from members of advantaged groups to finally use their privileged position and to actively stand in solidarity with those oppressed voices who need support. So, if you haven’t done so already, perhaps now is the time to act.

Daniel studied MSc Social and Public Communication at the Department of Psychological and Behavioural Science at LSE. He has specialised in Social and Political Psychology with an emphasis on political participation, group dynamics and the role of technology and digital platforms on public opinion making. He is currently working at the interception between Technology, Psychology and Communication. 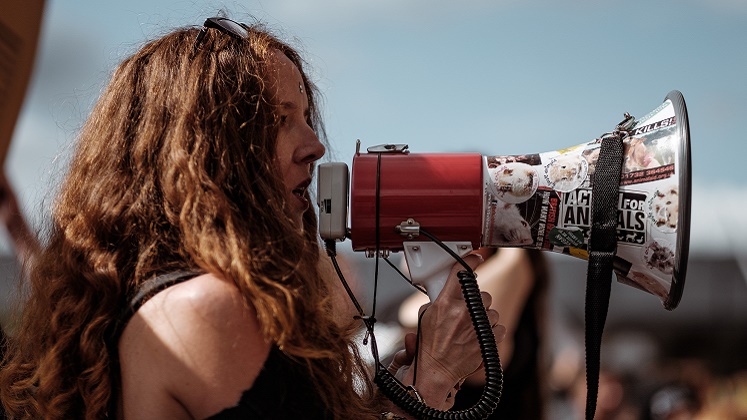