Drawing on her experience studying in both religious studies and development studies departments, Ellen Goodwin outlines how the crucial on-the-ground role played by religious institutions in humanitarian efforts has not always been complemented by an understanding of religion at the international policy level. But things are changing, as the UN and international NGOs seek to learn from and collaborate with a broader range of humanitarian actors.

In the last few years I have moved from a religious studies department to find a new home in development studies. After completing an MPhil in World Christianities, I have now started a PhD looking at religion and humanitarianism. This transition has been a formative one as it has taught me a lot about the variety of ways in which different disciplines approach the study of religion. While both disciplines have strengths that I can draw on for my area of research, I have been struck by how much humanitarian studies and practice could learn from religious studies. I think an interdisciplinary approach to studying religion and humanitarianism is necessary for developing the field and building a more in-depth understanding of how religion operates in humanitarian settings.

Humanitarianism’s roots are religious. Religious actors have always been among the first responders to humanitarian crises. In fragile contexts, often all that is left behind in poor communities to provide vital basic services are religious institutions. Yet despite religion’s intertwinement with the history and development of humanitarianism, in recent decades the formal humanitarian sphere (the coalition of UN agencies and international Non-Governmental Organisations who continue to dominate humanitarian decision making, policy and practice) has overlooked or actively avoided engaging with religion.

However, things are beginning to change. The humanitarian arena is at a critical juncture. As humanitarian crises appear more frequent, complicated and protracted, the formal humanitarian sphere has acknowledged its failure to keep pace. In response, the first ever World Humanitarian Summit (WHS) was held in 2016, calling on relevant stakeholders to find a New Way of Working that focuses on reducing risk, vulnerability and overall need, moving away from humanitarian exceptionalism towards strategies to deal with the underlying causes of humanitarian crises.

It is increasingly acknowledged that religion isn’t going anywhere. The global resurgence of religion that started in the 1980s persists today. It is no longer feasible to ignore the role of religion in humanitarian contexts because it is often intertwined, at all levels, with humanitarian processes. Religion shapes many people’s worldviews; it can be a personal motivation and a central part of the complex formation of cultural and social identity. It would be impossible to explore all the ways that religion interacts with humanitarian processes in one blog post, but to give you a flavour of the ways that religion is a relevant consideration across the humanitarian-development-peacebuilding nexus, religion can be both a driver of conflict and a source of reconciliation, religious beliefs can inform people’s decisions about their development and that of their community and religion presents a number of coping strategies for religious people who have suffered trauma. Simply put, religion is relevant to humanitarianism.

Holding on to the coattails of the relatively well-established field of religion and development, the humanitarian arena has started to acknowledge the unavoidable influence of religion on humanitarian processes. Major Faith-Based Organisations (FBOs) – now a prominent part of the humanitarian architecture – and world religious leaders were involved in a two-year long consultation with a wide range of actors in the run up to the WHS. This is an important step in recognising the opportunities and challenges presented by religion for more effective humanitarian action.

To overcome the current limitations of the literature and practice surrounding religion’s interactions with humanitarianism, perhaps humanitarian studies and practice need to follow religion and development’s lead and be opened up to agendas less obviously useful to international humanitarian agencies and Non-Governmental Organisations. A religious studies approach, incorporating a focus on ritual, tradition, inner belief, and lived, embodied religious experiences and expressions, could help explore the different ways that religion, at all levels, impacts humanitarian processes.

This is beginning to happen. An approach more akin to religious studies is beginning to be adopted, to challenge the formal humanitarian sphere’s so-far-narrow and instrumental engagement with religion. For example, social science research exploring the role of religious actors, expressions and forms for mental health and psychosocial support in humanitarian settings, as well as in relation to migration, displacement and integration, are beginning to explore the scope of religion’s relevance to humanitarian issues.

Ellen Goodwin is an ESRC-funded PhD candidate at SOAS, University of London. Ellen’s research focuses on the role of local interreligious cooperation across the humanitarian-development-peacebuilding nexus. 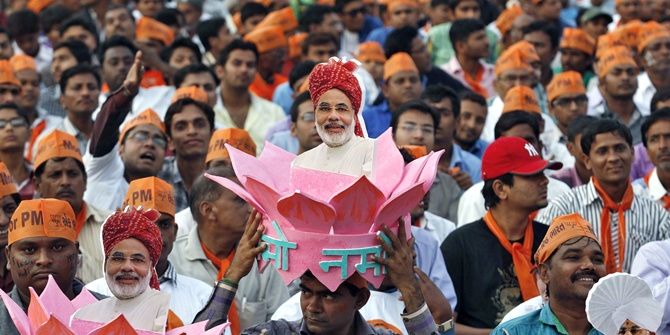