In the third article of the ‘Real-world Approaches: Freedom of Religion or Belief‘ series Jessica Giles articulates why a flourishing civil society, free of undue state interference, is essential for religious freedom. Empowered civil society organisations can act as a buffer between governments and individuals, creating a space that accommodates difference and disagreement.

Various attempts have been made, according to Witte as far back as the Edict of Milan in 313, to accommodate religious difference within constitutional structures in order to facilitate some form of plural living together. We are informed, however, that restrictions on religious freedom are on the increase: OpenDoors, Aid to the Church in Need, the Pew Research Center, the US Department of State, the UK Foreign & Commonwealth Office in its annual report on human rights and in the Bishop of Truro’s Independent review, the UN Special Rapporteur’s reports and the report on EU Guidelines and the mandate of the EU Special Envoy on the promotion of freedom of religion or belief all paint something of a gloomy picture in this regard. In situations where faith ought to be the one reassuring constant in the trauma of displacement, there is a particularly severe impact on refugees. A spectrum of governance structures across the globe, including extreme forms of neutrality on the one hand and forms of theocracy on the other, support the exclusion of the public manifestation of religion, including in the work place (for example, see my work in PILARs, Oxford Journal of Law and Religion and Implicit Religion).

As Hans-Martien ten Napel pointed out in the first article in this series, when governments ignore the moral frameworks guiding those within their borders they risk a growing gap in democratic legitimacy. This of course presupposes a desire for democratic legitimacy. In some states historic and current political developments mean democratic legitimacy can be as much an aspiration as the implementation of the international rights frameworks themselves. Even where these rights frameworks are incorporated within constitutional structures at a national level, governments may find themselves overwhelmed by day-to-day tasks which deny them any ability to attend to what might appear to be a refined and Westernised approach to governance. In other instances, states can find the nature of the indivisibility of the rights frameworks challenging because being required to adopt the full spectrum of rights together with implementation mechanisms might challenge fundamental aspects of that society. The refined nature of Western jurisprudence on freedom of religion and belief, as well as other core rights, can have very little resonance with conditions in non-Western states with differently oriented and unique constitutional contexts.

This article is not seeking to provide an apologetic for states’ abuse of fundamental rights. What it does is propose a way forward which goes beyond what can, for some states, be a rhetoric of rights, to suggest a mechanism towards implementation in places where research suggests rights restrictions are being sustained, or even increased.

Moving forward with the all-or-nothing approach of indivisible core rights, based upon bivalent approaches to reasoning propounding right or wrong outcomes, may simply continue to mitigate against progress towards implementation. It can also rub up against interwoven faith-based understandings of society. Religion and belief, and in particular the traditions related thereto, play a particularly important role in each state’s unique constitutional context and can, perhaps counter-intuitively, act both as a barrier to freedom of religion or belief as well as providing support for it. How then to accommodate the religious and constitutional context and still implement a spectrum of rights, and in particular freedom of religion, without compromising the core content of either the right or the religion, and without disrupting the indivisible rights framework that is held out, for good reason, by the international community to be that to which states should aspire?

One way forward, through what might seem like insurmountable cultural difference, could be to take a fresh approach towards creating safe platforms for dialogue. This uses multivalent rather than bivalent forms of reasoning so that multiple justifications building towards consensus can be found in order that it is possible to avoid an approach which always looks for right and wrong answers. Such an approach would involve protecting the core beliefs or tenets of various civil society groups (faith-based or otherwise) whilst allowing them to identify those rules or beliefs which form their tradition and, which allow them to contextualise over time. The flexibility built into the traditions of various civil society groups can provide mechanisms for accommodating difference and facilitating plural living together.

Adopting a multivalent form of reasoning permitting civil society groups a voice informing law creation and adjudication accords not only with the fundamental right to freedom of thought, conscience and religion, but also facilitates contextualisation of the right itself within unique constitutional contexts. This protects what is often a delicate balance between elements of society and provides an intentionality within various forms of governance towards pluralism. While the right to religious freedom and accompanying legal provisions may provide tools within a constitutional framework to facilitate plural living together, it is the willingness of those governing and the governed, together with mechanisms for implementation and the ability of the judiciary to interpret and enforce legal provisions that are key to their success. Intentionality towards plural living together at various levels of society is the essential backdrop against which any aspiration to freedom of religion or belief sits.

Where intentionality towards pluralism is absent within a state it would be instructive to revisit the theological political philosophy of Herman Dooyeweerd whose work informed Dutch society from the 1920s. His approach to what Chaplin terms ‘normative institutional pluralism’ provides a refocusing on the importance of intermediate institutions within civil society and a mechanism for resolving disputes between them. These institutions act as a buffer between the centralising, power-seeking tendency of government and the pull of individualism of the citizenry. With Western societies becoming ever more individualistic and some non-Western societies becoming or remaining resolutely focused on strong forms of central government, Dooyeweerd’s emphasis on the need for various civil society groups existing independent of the state, and governed only to the extent that it is necessary to do so to set minimum rules, provides a way forward that could be adapted by various cultures in order to build plural living together. This approach accords with more communal forms of living together familiar to Asian and African cultures and has resonances with the religious freedom accords recently propounded by Muslim states: for example see the Marrakech Declaration and the Beirut Declaration.

I explore these ideas further in Tradition as a Peacebuilding Tool and in my Implicit Religion article ‘Religious Freedom in Global Context’. In a forthcoming chapter I look at a theological philosophical approach to religious freedom based in reformed theology. This proposes a multivalent, dialogical approach to providing a rationale for freedom of religion and belief as an aspirational universal right, answering the call in the religious freedom accords to engage faith groups in plural civil society building.

Jessica Giles, SFHEA, is a law lecturer at the Open University. She qualified as a solicitor in the 1990s, spending time working in both high street and commercial firms, she then moved to the ICLR working in the High Court and European Court of Justice as a law reporter, moving into academia part-time in 2006 and full-time in 2013. She converted to the bar in 2016 and is currently studying for a PhD by published work in the field of human rights law and theology. Her teaching interests are in the field of public law and business, human rights and corporate social responsibility. She is on the advisory councils of the Kirby Laing Institute for Christian Ethics, Cambridge, and the McDonald Centre, Christ Church, Oxford University. 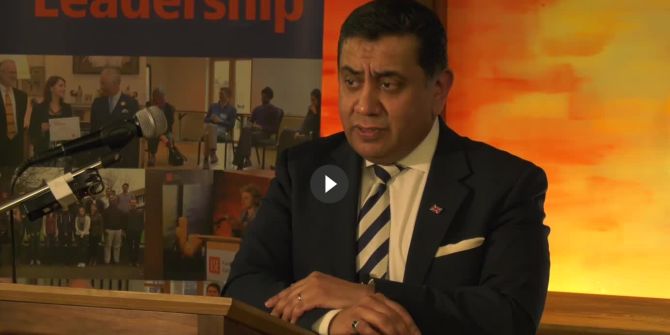 The Marrakesh Declaration: A Muslim call for protection of religious minorities or freedom of religion?