In a recent edition of The Guardian, there was a story about the privatisation of Berwick Street Market, an historic London market in the heart of Soho. Stallholders are protesting at the council’s decision to bring in a “commercial operator” to manage the market. Why would the council would do that? Not only for efficiency reasons, but as a councillor mentions, the market needs to “wash its face”. Bringing in a market organiser for Berwick Street is a way of changing the look and feel of the market and the area; as a market campaigner says in the article “the reinvention of markets has got to be done in a curated way”.

In my doctoral research, I am studying how street food markets are curated in London; I am interested in exploring how markets are organised and how they create and transform place. I have done a 10-month ethnography working with a company that organises markets and with food traders at their stalls in various locations; during fieldwork with these curators, I have been able to understand how the street food scene works and develops.

It might seem that these street food markets proliferate organically and randomly through London, and that the location, set up, and food offered has developed spontaneously. However, according to my research findings, these markets are highly organised spaces. The curation of markets is a form of creative labour, in which market organisers curate these spaces with a particular understanding of issues like taste and class and inclusion or exclusion of certain audiences. This process of curation of pop-up markets is an interesting case to illustrate how cultural and economic decisions are intertwined to generate markets in cultural economies, but also how these decisions create places or shape the experience of places. 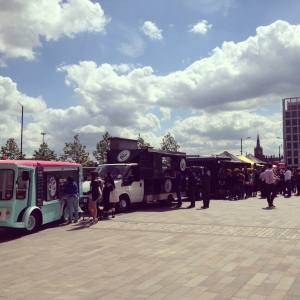 This curatorial process also involves having some kind of “spatial awareness”; market organisers have an understanding of how local spaces are transformed according to their taste. In many occasions, this transformation contributes to the regeneration process, where pop up markets can improve the perception of certain deprived areas or add value to the land or properties, enhancing the offer of development companies. Most market organisers work closely with urban development companies, landowners looking to add value to their land, or councils running regeneration programs. In the case of Berwick Street Market, the council expects that a company can “curate” the market in a certain way, attracting a wealthy audience that could generate more profit for the stallholders. But also, as a way of cleansing the streets of Soho from its traditional audience. Which apparently is beneficial for the offices in the area. An example of this process is what has happened with Rupert Street close by, which is manged privately. It has been set up with a generous donation from Soho Estates, in a street that was usually occupied by ‘sex shop’ and pub customers. Now mainly office workers and tourists can enjoy a hot meal for lunch.

In my research, I am studying the working practices of market organisers and street food traders, in order to understand how the scene works. I am interested in looking at markets as cultural forms that are created by economic and cultural decisions; and also to look at markets as tools for place making. I am arguing about how the curation of street food markers depicts a process of value generation in a cultural scene that is transforming places; which is happening in a context of rapid urban change in London.

Paz Concha is a PhD Candidate in the LSE Sociology Department. Her ethnographic research explores the relationship between cultural economies, place making and urban regeneration.

Juggling Studying, Work and Volunteering: is it possible?

The Sociology of Doom: How studying sociology traumatises Black students.

The importance of praxis: class, social mobility and “Sociology as a Martial Art” – Part II