In this piece, Tom Brookes explores the division between locals and cosmopolitans, reflecting a common experience of millennials in the UK and beyond.

I grew up in Morpeth, a town in the north east of England, sixteen miles north of Newcastle. In October 2017, I met up with two friends from Morpeth who have relocated, like me, to London. While talking about peers from high school, my friends explained a comic shorthand they use to refer to those who have remained in Morpeth. Due to the trend among that group to buy new-build houses on estates on the outskirts of town, often built by the property developer Bellway Homes, my friends have taken to referring to our Morpeth-based peers as ‘Bellway Homes’. 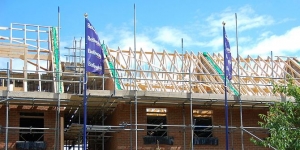 I asked about a school friend who recently shared on Facebook his pride in having gained a house, a car, and a graduate job in the area, all since graduating from a local university in 2016. “He is very Bellway Homes,” they replied. There is undoubtedly an element of derision in their use of the term. To be ‘Bellway Homes’ is to lack the ambition of leaving your home town, which the three of us have done.

There are also elements of envy and doubt in their use of ‘Bellway Homes’, however. When returning to London by train after a visit to Morpeth, my friends might text one another stating that they “feel a bit Bellway Homes.” In this instance, the term encapsulates homesickness, envy for those typical symbols of adulthood which seem unattainable by millennials working in London, and doubt as to which group has really made the ‘right choice’.

The division of my peers between the ‘Bellway Homes’ and the movers cannot be easily mapped onto traditional social class stratifications. Measuring economic capital according to income, assets, or family wealth would fail to replicate the division. Instead, it is cultural. Indeed, it is emblematic of what many see as the foremost cultural division of our times, one which has been politicised and moralised, seen as the cause of and solution to Brexit, Trump and all of life’s problems: the division between locals and cosmopolitans.

Eleven years and a world of difference separate the conference speeches of two prime ministers, the first appealing to cosmopolitans, the second to locals. They share a proselytising tone, a tendency to chastise swathes of the population, and nothing more. In September 2005, Tony Blair delivered his chiding. “I hear people say we have to stop and debate globalisation,” he said. “You might as well debate whether autumn should follow summer.” Depicting the world with the feverish anticipation of an apocalyptic preacher, he continued. “The character of this changing world is indifferent to tradition. Unforgiving of frailty. No respecter of past reputations. It has no custom and practice. It is replete with opportunities, but they only go to those swift to adapt, slow to complain, open, willing and able to change.”[1]

A conference speech may not change the country, but it reflects it. May’s targeting of the ‘citizens of nowhere’ was calculated in the wake of the Brexit vote, which politicised the local/cosmopolitan division and cast cosmopolitanism as a marker of identity. In his book The Road to Somewhere, published a few months after May’s speech, David Goodhart labelled the division as one between the ‘Somewheres’ and the ‘Anywheres’. Like the ‘Bellway Homes’, as my friends would have it, Somewheres tend to be rooted in the area of their birth and are “moderately nationalistic and if English quite likely to define as such.” Anywheres are more likely to move from their home town and “see themselves as citizens of the world.”[3] Although Somewheres are more numerous than Anywheres, Goodhart contends, the former have a weaker political voice. Discontent stemming from this imbalance resulted in the vote to leave the EU.

The clarity of Goodhart’s division is compelling. Its simplicity is troubling. But does it exist? In social theory, cosmopolitanism has long been thought of in terms of social class and Goodhart writes in this tradition. In Ulf Hannerz’s seminal text on the matter, for example, the cosmopolitan was cast in an inescapably Western, middle-class mould: “To become acquainted with more cultures is to turn into an aficionado, to view them as art works.”[4] Partly in response to this, however, sociologists Michèle Lamont and Sada Aksartova identified a non-elite form of ‘ordinary cosmopolitanism’, evident among workers of various racial backgrounds during encounters of racial difference in their daily lives.[5] Some of the most interesting recent work on cosmopolitanism in sociology looks at it from a Bourdieusian perspective, considering ‘cosmopolitan capital’ as a valuable resource to be competed over within the field of education. However, Claire Maxwell and Peter Aggleton found that students studying at elite private schools, who would be considered Anywheres by Goodhart, were ambivalent to cosmopolitanism.[6]

I have three recommendations for how to deepen our understanding of the local/cosmopolitan divide. First, recognise the plurality of cosmopolitanisms. The term itself suggests that there are in existence many different worldviews. There can be many different cosmopolitanisms too, existing across the boundaries of class, race and nationality. Second, ascribe moral values to moral cosmopolitanism but not to cultural cosmopolitanism. Much that is described as cosmopolitan can simply be purchased. There is nothing moral about going on holiday, or viewing cultures “as art works.” There is nothing moral about living in a multicultural city. But the moral value of seeing universality in spite of difference is a real cosmopolitan quality. Finally, remember that the cosmopolitan cannot exist without the local. The oxymoronic ‘citizens of nowhere’ do not really exist; Anywheres come from somewhere too, as Jonathan Freedland observed.[7] Remember the mutability of ‘Bellway Homes’, a term that contains multitudes.

Fragile Future for Afghanistan’s Security and its Neighbours

EU Referendum and the Perils of #Perception