Shruti Chaudhry and Taneesha Mohan argue that cross-regional marriages in Uttar Pradesh do not constitute bride-buying or trafficking, and are instead a new kind of commercially mediated marriage.

Across India, particularly in the northern parts of the country, women move from their natal homes to their husbands’ homes post-marriage owing to norms of marriage and post-marital residence such as those of village or territorial exogamy and patrivirilocality (residence at the husband’s home in a context of patrilineal descent). This movement of women from their natal to their marital homes constitutes migration—according to the Census of India 2001, 42.4 million out of 65.4 million female migrants (64.83 per cent) cited marriage as the reason for migration.

There are specific norms that define the limits within which spouses can be selected. In rural north India, for instance, even though marriages are arranged outside the gotra and village or neighbouring villages, marriages are always negotiated within a given radius or region (i.e. within 15 miles as village studies suggest). However, over the last few years, there has been a notable increase in what have come to be described as long-distance or cross-regional marriages in the north Indian states of Punjab, Haryana, and Uttar Pradesh, where it has been reported that women are being ‘bought’ for marriage from the eastern and southern states: West Bengal, Bihar, Jharkhand, Orissa, Andhra Pradesh, Kerala, and Assam, to name a few. These marriages cross caste (sometimes even religious), state, and linguistic boundaries and the natal and conjugal homes of these brides are separated by hundreds of miles. Cross-regional or long-distance marriages are now known to be taking place in parts of Gujarat, Madhya Pradesh, and Rajasthan as well.

There is, however, little academic work on this phenomenon. To fill the gap, we conducted fieldwork in a village in the Gunnaur tehsil of Badaun district in the north-central part of Uttar Pradesh in June 2010 as part of a larger Centre for Women’s Development Studies (CWDS) project on Gender and Migration. The resulting paper, “Of Marriage and Migration: Bengali and Bihari Brides in a U.P. Village”, attempts to address the following questions: Why do women migrate over long distances for marriage? Why do men marry brides from other states? Who negotiates such marriages? What kinds of marriage payments are involved? Do these marriages constitute bride buying? In such circumstances, is dowry replaced by other forms of marriage payments? Given the geographical, cultural, and linguistic differences involved in such marriages, are cross-regional brides incorporated into husbands’ families and village communities? What about the status and rights of the children born of such marriages?

In the Badaun village, which comprised 247 households, there were nine cases involving men (five Muslim and four Hindu) who had bought brides from the states of West Bengal and Bihar. We gathered data through semi-structured interviews conducted with the nine long-distance brides; we also interviewed some of the husbands of these brides. Other members of the conjugal household – mothers-in-law, brothers-in-law, etc. – were also spoken to. We supplemented information gathered through the interviews with data collected through a census of the entire village, which was followed by a questionnaire-based survey of 50 households (35 migrant households and 15 non-migrant households).

Baduan is one of the most economically backward districts of Uttar Pradesh. The village being studied is located at a distance of 49 miles from Baduan Town. The Yadavs (Other Backward Castes) are numerically and socially the dominant caste in this village, constituting 81.6 per cent of the households. The remaining 18 per cent of households are distributed amongst 12 different castes (six Hindu and six Muslim).  In this village, as in most of rural north India, marriages are arranged within the caste and outside the village.

We found that almost all marriages were arranged within the district of Badaun, with some arranged in the neighbouring district of Aligarh. The marriage distance varied from one to 37 miles, and the average age of marriage for women was 14-16 years while for men it was 16-17 years. Long-distance marriages did not, however, conform to these marital norms: all except one were inter-caste marriages and some also defied the norm of caste hypergamy. The average distance between the natal and conjugal homes of the brides also exceeded 620 miles: there were five brides from the Murshidabad, Mednipur, and Birbhum districts of West Bengal; the remaining two were from the Purnea district of Bihar. The first cross-regional bride came to the village 25 years before fieldwork commenced, while the most recent bride had arrived a month earlier.

The brides identified poverty, landlessness or marginal landholdings, and the inability to meet the dowry demands of local men as the main reasons why women migrated over long-distances for marriage. At destination, landlessness or marginal landownership combined with factors such as a previous marriage, older age, lack of family elders, or a ‘flawed’ reputation made men ‘ineligible’ for marriage in a context of an already existing shortage of brides owing to the adverse sex ratio.

Long-distance marriages primarily took place in the natal home of the brides and were negotiated through payments to go-betweens who were themselves cross-regional brides married into families in Badaun’s villages. In all but one case, no payment was made to the parents of the bride, nor were there dowry payments. In fact, the wedding expenses – including clothes for the bride, the wedding feast, travel fare, and payment to the go-between – were taken care of by the husbands and their families.

Moreover, despite the inter-caste nature of these marriages and myriad cultural and linguistic differences, the brides were accorded the status of wives and gradually incorporated into families and the village community. In light of these findings, we argue that cross-regional marriages are not bride-price marriages or cases of bride-buying or trafficking. Rather, they are a new kind of commercially mediated marriage involving payment to a go-between that does not fit into any of the available categories for social analysis of marriage practices.

For more information about cross-regional marriages in Uttar Pradesh, read Chaudhry and Mohan’s article, “Of Marriage and Migration: Bengali and Bihari Brides in a U.P. Village”, in the Indian Journal of Gender Studies, Vol. 18(3). 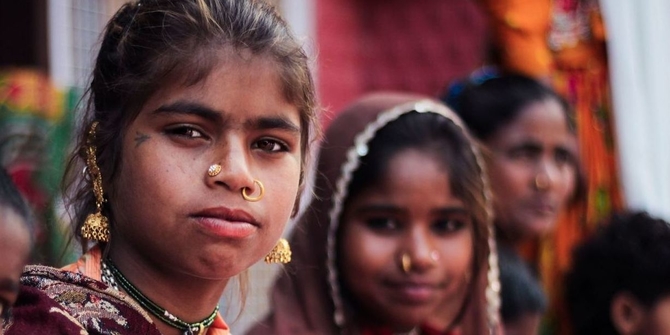 Bad Behavior has blocked 5034 access attempts in the last 7 days.