What began as Katerina Kimmorley’s master’s thesis investigating the value of distributing renewable energy solutions to urban slums in Bangalore is now a Lighthouse Activity under the Momentum for Change initiative of the United Nations. 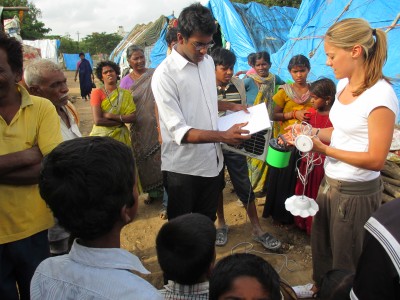 Pollinate Energy, a social business co-founded by LSE student Katerina Kimmorley, has been identified as a 2013 Lighthouse Activity under the Momentum for Change initiative of the United Nations. Pollinate Energy brings solar energy to Bangalore’s slums, where children cannot do their homework after the sun sets for lack of light, and families spend a significant percentage of their humble incomes on polluting kerosene lamps. Pollinate Energy also creates green jobs by training ‘Pollinators’, locals who distribute and install solar lighting systems within their communities.

The initiative is currently active in 250 communities across Bangalore, and will expand to other Indian cities in 2014. It began in 2012 when Kimmorley travelled to Bangalore to research the value of distributing renewable energy solutions in urban slums for her LSE master’s thesis in Environmental Economics and Climate Change. Kimmorley is now back at the School, pursuing a doctorate in Environmental Economics.

Both the Lighthouse Activities and the Momentum for Change initiative are being spearheaded by the UN Climate Change secretariat to shine a light on the enormous groundswell of activities underway across the globe towards a low-carbon, resource-efficient world. The 2013 Lighthouse Activities were selected by a 16-member, international advisory panel as part of the secretariat’s Momentum for Change initiative, which is funded by the Bill & Melinda Gates Foundation and the Rockefeller Foundation, and operates in partnership with the World Economic Forum.

Pollinate Energy, along with 16 other activities, is being showcased this month during the UN Climate Change Conference in Warsaw, Poland.