Gautam Appa examines Gujarat’s environmental record and finds little interest at the state government level in implementing protection measures both before and during Narendra Modi’s tenure as Chief Minister. 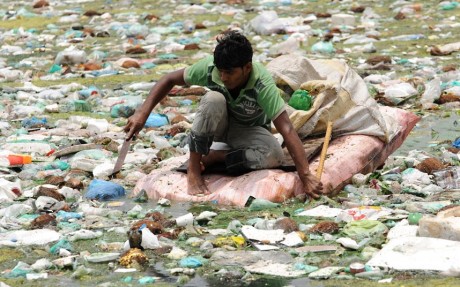 The story of environmental degradation in Gujarat going side by side with its industrial growth pre-dates Modi’s running of the state. Since the nineteenth century, Ahmedabad, the commercial capital of Gujarat, has led the way in large-scale cotton textile production. Surat, the second-largest city in the state, is known as the diamond hub of the world, and is also the textile hub of India, producing synthetic fibres and silk that have earned it the sobriquet of ‘Silk City’. With more than 500,000 powerlooms preparing grey fabrics and 450 dyeing and printing  machines engaged in processing synthetic fabrics, Surat accounts for 40 per cent of India’s fabrics exports.

Further, ancillary industries have sprung up to service the growth of industries in Ahmedabad and Surat. The ‘Golden Corridor’, a 400-kilometre-long strip that stretches from Vapi to Mehasana near Ahmedabad, has also seen the growth of more than 50 industrial estates. Most house a thousand small- and medium-scale factories manufacturing petrochemicals, pesticides, dyes, paints, fertilizers, chemicals and industrial goods.

As elsewhere in the developing world, this impressive industrial growth has been accompanied by pollution on a large and increasing scale. Air and water pollution, accumulation of solid hazardous waste and land contamination have been a concomitant part. From coal dust and fly ash spewing from Ahmedabad’s cotton textile mills to the dumping of waste products in rivers, woods, ravines and valleys along the Golden Corridor, the environmental degradation has gone largely unchecked.

For a typical example of what happens, consider Hema Chemicals in the Gorwa Industrial Estate in the Golden Corridor, which manufactures chromium. It is alleged that it dumps its highly toxic solid waste in different parts of the industrial estate and in the housing colonies and slums on its periphery. For two years the NGO Paryavaran Suraksha Samiti (Committee for the Protection of the Environment) kept lodging complaints about this with the Gujarat Pollution Control Board until it ordered that the company’s power supply be discontinued. When power was cut off on 17 August 2001, the company mobilised its political contacts and had the power restored the very next day. This way, over the years, both Congress and BJP governments have chosen to ignore Gujarat’s environmental challenges.

Modi came to power in October 2001 and has been the Chief Minister of Gujarat ever since. Did anything change? Yes, but not for the better. The Gujarat government’s formula to push through industrial development remained the same—it continued to ignore illegal waste dumping on private and government lands and rivers. The result has been a steady worsening of the environment, earning the state the dubious distinction in 2010 of two firsts: the status of being the most polluted state containing the most polluted industrial site of Vapi. Here is how it came to pass.

The Central Pollution Control Board of India declared Gujarat the most polluted state in the country because it accounted for the highest percentage – 29 per cent – of total hazardous waste in 2010. One of the worst offenders was the industrial cluster of Vapi, which scored 88.09 in 2010 under the Environment Pollution Index developed by the board with IIT-Delhi. Industrial clusters with a score of 70 and above were considered critically polluted, and kept under surveillance. For this reason, the central government’s Ministry of Environment and Forests imposed a ban on new projects or expansion of existing ones in Vapi.

On 26 October 2011, the Ministry lifted the ban after Vapi Industrial Zone and the Gujarat Pollution Control Board assured the ministry that it would implement an action plan to improve its environment quality. But no action followed the promise. By 2013, the pollution index had reduced marginally to 85.31, still topping the country-wide pollution chart. So the ministry re-imposed the ban in September 2013, stating that “even after two and a half years of implementation of action plan there is no improvement in the environmental quality of Vapi”.

Nothing significant has been done to address river pollution either. A recent paper on Sabarmati River (pictured here) finds it to be highly polluted and urgently calls for the implementation of a sustainable water management plan for Gujarat. One wonders if Modi was aware of these continuing debacles when he made his environmental claim.

Modi has become the darling of all the big industrial houses of India because he has been willing and able to give away state-controlled resources (land, gas, electricity, nearly interest-free loans etc.) to private corporations without letting public objections or bureaucracy get in the way. This practice of crony capitalism delivers large profits with little effort. All state governments in India engage in such practices to some extent, but few as effectively as Gujarat under Modi. Environmental clearances have fallen victim to the rampant culture of crony capitalism in the state.

Take, for example, the Special Economic Zone in Mundra in the Gulf of Kutch. From 2005 onward, the Adani Group leased 7,350 hectares here from the Gujarat government at a rate of between one and 45 US cents per square metre for a 30-year renewable lease. In turn, the Adani Group sublet the land to other companies, including the state-owned Indian Oil Co., for as much as US$11 per square metre. The Adani Group also developed on this land a coal-fired power plant, the largest coal import terminal in Asia, and a 40-mile railway line linking the port to the national network.

However, much of this land was grazing land that can only be acquired legally if it is excess land under a formula and granted with the relevant village head’s permission. Villagers in Mundra say that their grazing land was signed away by earlier village chiefs without their knowledge and they have filed several cases in the Gujarat High Court to contest the acquisition. Moreover, villagers complain they cannot make a living off their land anymore because the fly ash from the Adani power plant and sea water ingress from unlined canals pumping it into turbines to generate electricity have completely destroyed the once rich soil.

After years of receiving complaints of environmental abuse, the federal environmental ministry set up a committee in 2012 to investigate. It found that the mammoth project at the Special Economic Zone “had violated multiple green rules, destroying mangroves, filling creeks and causing land and water degradation by dumping fly ash.” It recommended, among other things, that the Adani Group reconstruct the two channels used to suck in and send out sea water. However, neither the corporate group nor the state government paid heed to the report’s recommendations.

Meanwhile, residents of several villages filed petitions in the Gujarat High Court to get redress. In January, the court declared the Adani zone illegal and ordered the companies that had set up factories there to stop all work because the Special Economic Zone had been built without getting an environmental clearance. Under Indian law, a project this size would need environmental clearance from the federal environment ministry before any development takes place.

The Supreme Court has since refused to stay the lower court’s decision, although it has permitted existing tenants to keep operating. With hundreds of millions of dollars already invested – albeit in a project now in legal limbo – the question is whether the Adani Group’s investments are too big to shut down. The Gujarat High Court passed the ball on that decision to the federal government, asking if the project could be granted a belated environmental clearance. New Delhi in turn asked for a couple of months to ponder that decision. Now that India’s election is set to begin on 7 April, the federal government is blocked from taking this decision. If Modi does become the next prime minister, it will be interesting to see how long his government takes to give the Adani Group a back-dated environmental clearance. After all, he is efficient.