Jay Herndon describes how a company in Rajasthan economically empowers women whilst maintaining a competitive market outlook over charitable sentiments. It is market competition and not paternalism, he claims, that is accomplishing more for women in Rajasthan than good intentions.

I met Choti Yadav in Udaipur, a city in the Indian state of Rajasthan. A self-assured woman, she chatted amiably, stopping to take phone calls and respond to the various interruptions that pervade office life everywhere. The location of the meeting was a building belonging to Sadhna, a company selling handicrafts and original clothing, which employs over 600 female artisans in and around Udaipur. Choti, also Sadhana’s head of marketing, designed the kurta she wore to our meeting, a red and orange combination that was both intricate and subtle.

Choti grew up in Nathdwara, a village in the Aravalli hills where the economy catered to pilgrims visiting the local Hindu shrine. Choti’s childhood, spent plowing and gathering firewood, came to an abrupt end at the age of 15 when her parents arranged her marriage to a man in nearby Delwara. Two years later, Choti faced a crisis: a chronic illness had waylaid her husband, leaving the family with escalating medical bills and no way to pay them. Choti found a job with Sadhna, at the time an in-house women’s empowerment project run by the NGO Seva Mandir. Sewing at home was one of the only viable employment options for women in a district where purdah, the traditional practice of seclusion, often still held sway. While the piecework rates she received wouldn’t make her rich, Sadhna had an unusually generous benefits package that included health insurance.

Although her husband eventually recovered, Choti continued to work, becoming a group leader responsible for picking up garments from the cutting department and distributing them to 10-15 other women. This authority came with responsibility for every thread her group stitched. Without that experience, it is doubtful she would have approached Delwara’s panchayat (village head) in 2000 to demand he improve the lone water pump that only worked for 30 minutes each day. When the panchayat dismissed her concerns, Choti led local women and children to blockade the highway. The ensuing traffic jam prompted the district magistrate to arrive within hours and as a result, today dozens of pumps operate in Delawara.

While Choti’s civil disobedience embodied the very best of Gandhian principles of non-violence, Seva Mandir were wrestling with more practical issues – Sadhna had never turned a profit. In 2004 Sadhna broke away as an independent business. The harsh accountability of the marketplace demanded increased attention to detail and greater workloads for the seamstresses; when an order for Fab India took too long, they had to sit on ₹ 5,000,000 (€ 66,600) worth of inventory for an entire year. Sadhna also required better marketing. Outgoing and charismatic, Choti ascended once more to become the company’s public face at merchant meetings in Mumbai and Chennai.

Over her husband’s objections and her own trepidation, in 2006 Choti brought Sadhna’s wares to Lahore, as part of a wider Indian peace initiative. Over a decade later, she still smiles recalling the camaraderie she found with the women she met there. In 2008, and this time truly alone, she attended a global exhibition in London. After cramming to learn English clothing jargon before the trip, she sold over ₹100,000 in one day, handling the billing herself. Choti’s tenacity and unique talent and drive allowed her to transcend an impoverished life in Rajasthan. But her story embodies much wider trends in India’s development.

Seema Shah, Sadhna’s current CEO, arrived in Udaipur after 20 years as a chartered accountant in Bengaluru. There’s no questioning her determination to aid women; she’s helped more than a few employees escape physical abuse by moving them into Seva Mandir’s short-stay homes. But Seema knows that Sadhna only exists by earning profits. When workers recently asked for a regular salary, she reminded them they were “artisans, not employees.” They have the freedom to work whenever they see fit, but the business pays the piece rate for work that’s finished, inspected and accepted. Sadhna only makes garments to fill the orders they have in hand because they can’t afford to carry inventory. For now, their small scale precludes offering a traditional salary. A business this labor-intensive demands a disciplined yet flexible work-force.

Seema’s ideal worker is either married to an unsupportive husband, divorced, or widowed without help from her in-laws. The annual recruiting drive requires women to attend four meetings before paying a single rupee, while the benefits that helped Choti so much only arrive after a one year probationary period. Sadhna hires women most in need because they’re typically better and more reliable workers. While that doesn’t sound particularly noble, it effectively allocates income to the neediest families.

These harsh policies might appear contrary to their uplifting rhetoric, but it lets Sadhna operate, experiment and grow without depending on charity or government. When well-meaning activists pressure companies in the developing world to enforce regulations written in rich countries, they shouldn’t ignore the trade-offs that local social and economic conditions impose. Recent negotiations with a major international retailer stalled because that arrangement makes it impossible for Sadhna to 100% guarantee there was no child labor involved. Market competition, not paternalism, drives an independent organization that’s accomplishing more for women in Rajasthan than politicians’ whims or foreigners’ good intentions.

India’s now-defunct “License Raj” enabled an invasive and corrupt bureaucracy to micromanage countless firms, but the actual reach of the state remained limited for vulnerable populations.  The progressive, secular vision of Jawaharlal Nehru, and even the subsequent leadership of his daughter Indira Gandhi, did little for the day-to-day lives of rural women. Inequality in health, education and income still pervades too much of South Asia and cries for better policies. At the same time, labor exploitation is an awful reality we rightly abhor. That isn’t the case here. While Sadhna workers can quit at any time, they rarely do because for most of them the alternative to sewing isn’t working as a secretary, teaching at a crèche, or even working in agriculture, but purdah.

Seva Mandir’s chief executive still chairs Sadhna’s Board of Directors to ensure that no one forgets their original mission, but the nature of an ideal often puts it just beyond reach. That mission helped Choti discover an unexpected savvy and business acumen, one that allowed an uneducated child bride to pay for her two children’s college education. More women will have that opportunity if Sadhna’s sales keep growing. Seema balances that dual imperative every day. She knows all too well that, in the words of MIT economist Esther Duflo, “neither economic development nor women’s empowerment is the magic bullet it is sometimes made out to be… realism needs to temper the positions of policymakers on both sides.”

Jay Herndon is pursuing his PhD in economics at the University of Alabama. This article arose from his field work with Seva Mandir in Udaipur, Rajasthan. You can follow him on Twitter: @Jay_Herndon 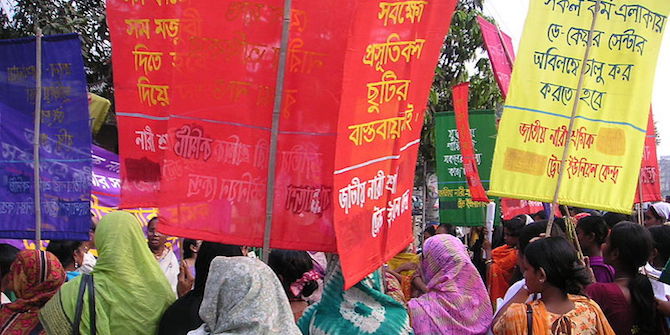 Bad Behavior has blocked 4462 access attempts in the last 7 days.