In his new book, Rogue Elephant: Harnessing the Power of India’s Unruly Democracy, journalist Simon Denyer writes that “change is possible [in India], and it has to come.” Here he speaks to India At LSE about the changes he witnessed while working as a foreign correspondent in India, first with Reuters and then as the India Bureau Chief for the Washington Post, and what further developments he expects to see under the new Indian government. 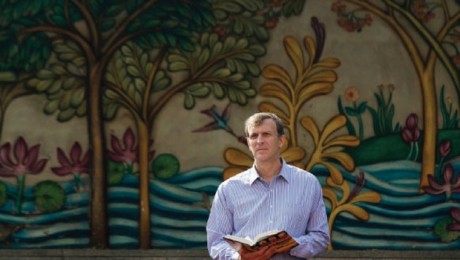 Q. In Rogue Elephant, you describe Indian democracy as “unique”. What makes it unique?

A. There is a unique tension in Indian democracy. On one level, democracy has united India and brought the nation together in a way that cynics didn’t expect—it is India’s greatest strength  But on another level, it’s the worst thing about India. Looking at India from China [where Denyer is now the Post’s China Bureau Chief], people say Indian democracy is awful—defined by crime, corruption, populism and politicians who don’t do anything good. The tension between Nehruvian ideals of a secular, democratic nation and India’s dysfunctional parliament – the dual nature of Indian democracy – is at the heart of understanding India.

There’s also a third aspect of Indian democracy that’s becoming more important now:  democracy has to do much more than keep people together, it actually has to deliver. And expectations of what democracy should deliver have grown with the middle class and the rise of media and technology. There’s a growing engagement among Indians with politics and democracy: voter turnout in this election was incredibly high and people are engaging through the Right To Information Act, 24-hour television, street protests, and more. This energisation of Indian democracy is exciting: people have realised that they need their politicians to deliver and give them the opportunities to realise their aspirations.

Q. You arrived in India in 2004 when the country was ‘shining’ and your book has been published at a time when it’s struggling. What do you think is responsible for this shift?

A. The incredible ineptitude and complacency of the Congress Party, the lack of leadership from Manmohan Singh, the sycophantic nature of the party and its  inability to challenge the Gandhi family. In my opinion, the Congress wilfully misinterpreted the mandate it was given in 2009, which I think was a mandate for Singh and economic growth, rather than the party’s pro-poor polices. But the party tried to turn it into a mandate for Rahul Gandhi.

These underlying reasons aside, I think the shift in India was caused by the scandals surrounding the Commonwealth Games and the 2G scam. These punctured the idea that India was going to be the next superpower. Telecoms were supposed to be India’s success story, so the 2G scam occurring at the cabinet level under the prime minister’s nose really shook people and made them question what the government was there for, beyond stealing money.

Q. You have documented Manmohan Singh’s fall from grace both in this book and previously – and more controversially – as a journalist. What, if anything, do you think Congress and India will learn from his legacy?

A. The Congress Party needs to work out a new direction and find a new meaning that’s separate from blind worship of the Gandhi family. One of Singh’s major failings was his loyalty to Sonia Gandhi.

More broadly, I think India will realise that it’s not possible to run the country well as a coalition without leadership of the kind that was lacking in Singh. [BJP’s prime ministerial candidate] Narendra Modi represents the antithesis of Singh: he is worryingly strong-willed and self-reliant. Politicians are also beginning to learn that they need to deliver on people’s aspirations, and not just the middle class but also rural voters. In Uttar Pradesh, Akhilesh Yadav ran a more aspirational campaign than Rahul Gandhi did. This is a positive message for India: it’s not just about hand-outs, it’s about enabling people to achieve their aspirations.

During the 2004 elections, Sonia Gandhi would talk about protecting the core values of Indian democracy such as secularism. Back then, this message had resonance because of the BJP’s track record and the recent riots in Gujarat, and people voted for Congress. But in 2014, people roll their eyes when Sonia talks about secularism. There have been 10 years of Congress rule and the mantra of secularism loses its power if you mess up the economy and steal.

Ultimately, Congress has a role in Indian politics, especially as India needs strong national parties. But first it needs a profound period of self-examination.

Q. The Indian media has itself been in the spotlight during this election cycle and concerns have been raised about the growing nexus of the media, corporations and politics. But in Rogue Elephant you praise the media, saying it fulfils its function “imperfectly, but still with gusto.” How do you see the media having the greatest impact?

A. More than in the 2004 elections, this election was built around a national theme: kick out Congress and bring in Modi. The media helped that national theme to develop and spread. The media does reduce politics to sound bites and sensationalism – as it does in other countries – and potentially sparks a culture of negative politics. But through that the media helped get Modi’s message across.

Overall, the Indian media has done a great job of calling Indian politicians to account, and India needs that all the time to remove the aura from power. In this context, what I would like to see is more investigative and unbiased reporting. At the time I left India, it was quite hard to find a really good analysis of Modi’s Gujarat that wasn’t based on preconceived ideas. The media’s greatest failing, both on TV and in print, is the lack of willingness to get out on the ground and report in depth.

Q. You see hope for India in its young population, its increasingly empowered citizenry, urbanisation and the impact on Indian society of new technologies, particularly those that help reduce corruption and bureaucratic hurdles. Do you think India will be able to capitalise on these trends?

A. One of the main beneficiaries of these trends is Arvind Kejriwal [of the Aam Aadmi Party (AAP)] who surfed on these into the Delhi Assembly. He capitalised on these trends and then blew it, badly. The opportunities to capitalise on these trends now lie with one man who claims to be India’s saviour. Thanks to these trends, the mandate he’s got in these elections amounts to a strong personal mandate for him. The broader point is that in the next 20 years these trends will continue to ensure that people demand more of India’s politicians, and that’s the best news, whether or not Modi realises the hopes people have for him.

Q. In your book, you say that the BJP’s Narendra Modi “threatens many of the things [you] love about India.” What explains his appeal among the Indian electorate and what might that mean for Indian democracy?

A. Modi represents strong decisive leadership where India has had weak and ineffectual leadership. He casts himself as an outsider who can breakdown the cosy elite who have monopolised power. More importantly, he casts himself as a man who can help people realise their aspirations. Young and old Indians alike are sick of politicians who appear unable or unwilling to govern, and Modi represents a will to govern.

In some way, Modi’s appeal is a test for Indian democracy. A few years ago, people were writing India off, saying it would be defined by fractured coalition governments and weak leadership. Modi has shown that strong leadership is still possible. The hope is that Modi’s strength coupled with the strength of India’s other democratic institutions – the media, Supreme Court, the federal-state structure, i.e. the checks and balances of Indian democracy – prevent him from turning into another Indira Gandhi and instead prove that India can produce coherent leadership and governance.

That said, I have two concerns about Modi: one is that his being at the centre of power will alienate Muslims and act as a recruiting call for extremists. The second is that Modi, who is clearly uncomfortable with dissent and criticism, will bring pressures to bear on the media. How that plays out and how the media reacts will be very interesting.

Q. What does an India under Modi mean for regional stability, particularly India’s relationships with China and Pakistan?

A. China is looking forward to Modi as prime minister for several reasons. He’s been there twice and cast himself as a friend of China. He’s also a strong leader and the Chinese respect strength. Moreover, because Modi has had problems with Washington, the Chinese think he won’t be such a good friend of the United States. I don’t think it will be that clear cut. I think Modi will cultivate good relations with both China and the United States for economic reasons. The BJP traditionally is also more inclined than Congress toward the US. Although there’s positive anticipation in China about Modi, I think he’ll calibrate the two relationships in a more nuanced way.

In terms of Pakistan, I don’t think Modi can be [Atal Bihari] Vajapyee—the strongman who brings peace between India and Pakistan. Again, there are several reasons for this: Modi has no [Pervez] Musharraf-like figure to partner with across the border; the regional dynamics with the United States leaving Afghanistan are too uncertain; and because Modi isn’t Vajpayee. The relationship with Pakistan will continue to be an uneasy one. It will be interesting to see how he reacts to terrorist attacks, the Kashmir issue, and incidents involving Muslims in the north-east. He will need to show a more nuanced hand than when he was leading Gujarat. This will be a big test for Modi as prime minister rather than chief minister.

Simon Denyer is the Washington Post’s China Bureau Chief and the author of “Rogue Elephant: Harnessing the Power of India’s Unruly Democracy”.

Bad Behavior has blocked 3143 access attempts in the last 7 days.