Dalit Studies is a new collection of essays which revolve around challenging existing narratives and highlighting the obstacles faced by the community in their relentless endeavours to attain social and political recognition. Amal Shahid writes that the book explores timely and pertinent questions relating to Dalit movements and recommends it as an interesting read for specialists and non-specialists alike. 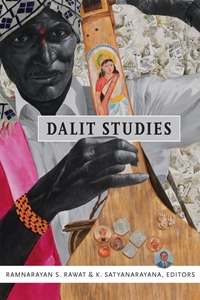 In light of the recent Dalit agitation in India, the well-timed publication of Dalit Studies enriches the renewed debate on caste. Casteism has plagued the Indian social fabric since antiquity, stratifying people by birth on an occupational basis. The book deals with the struggles of ‘Dalits’, or the ‘untouchables’, the lowest caste in society. The essays put into perspective the ongoing social movements that have created a volatile atmosphere in the subcontinent, especially during the past year.

Dalit Studies aims at illustrating years of Dalit activism by tracing their histories from the colonial era to the present day. The wide array of essays included in the book span a variety of genres, such as history, sociology, anthropology, political science, area studies and literary studies. The approach of the contributors is mostly integrative: their research draws upon diverse sources that often cut across disciplinary boundaries, ranging from memoirs, literature, agrarian records and field surveys to archival evidence. Although aimed at an academic audience, the varied subject matter might also appeal to those interested in Dalit movements. Thus, the simple expression of the essays would serve to engage a broad span of readers.

The main theme of the book revolves around challenging existing narratives in Dalit studies and highlighting the obstacles faced by the community in their relentless endeavours to attain social and political recognition. This has been achieved by incorporating new and neglected studies of the field: Dalit feminism, political activism in major Indian states, identity politics and debates on caste-based reservations have all been extensively dealt with. The book is divided into two sections: the first part deals with the history of Dalits, and the second examines current issues in Dalit activism. This is in addition to detailed introductory chapters on the prevailing literature on Dalit studies and its context. The comprehensive background eases the understanding of Dalit narratives for those unfamiliar with the field.

In general, the essays display some interrelated and overlapping arguments. First, Dalit ideology and principles, mainly based on the views of Ambedkar, are at odds with those of Gandhi. This is evident in their polarised perceptions of modernity as well as their rejection of the romanticised term used by Gandhi for their caste: that is, Harijan or ‘children of God’. Second, the rejection of Hinduism by the Dalits often meant conversion to another religion, like Sikhism, Christianity or Buddhism, even though inequality and discrimination against the Dalits eventually made its way into these religions as well. Third, Dalit activism brings out problems in the conception of Indian nationalism, especially its exclusionary character. Finally, the struggle of the caste extends to all fields because discrimination against them is seen across all spheres. Therefore, Dalit agitation demands recognition socially, but also in politics, the economy and academia.

However, the contributions also put forth some pertinent questions, which is the main strength of the book. One such contention relates to the effectiveness of caste-based reservations in political and economic spheres. Sambaiah Gundimeda’s essay on the case study of Andhra Pradesh brings forward the issue of unequal representation of a certain section of Dalits over the others. Besides illustrating how Dalits themselves are a heterogeneous group competing against each other for opportunities, it appertains to Shyam Babu’s argument in the following essay about class differentiation among caste. Therefore, since the more privileged among the underprivileged are able to gain more from reservations than others, the whole objective of caste-based reservations comes under scrutiny. Gundimeda tackles the point by putting forward effective solutions and outlining the benefits of maintaining caste-based reservations in both public and private sectors.

Another issue analysed in the book is the paradoxical nature of Dalit feminism. Dalit feminism challenges not only mainstream feminism by differentiating itself from the concerns of upper-caste women, but at times contradicts Dalit activism as well. Taking the case of Premchand’s literature, Laura Brueck’s essay highlights how Dalit male activists fixate on the victimisation of Dalit women through which they deny Dalit women ‘any kind of agency outside of that of allegorical victim of caste oppression’ (195). By contrast, Dalit feminism demands moving beyond narratives of sexual violence towards a discourse that accords Dalit women dignity of identity. Women of this caste thus wage a two-pronged offensive against casteism in mainstream society and patriarchy within their own caste.

These arguments furthermore raise the common question of ‘who speaks for whom?’, whereby Dalit men might not represent the position of the women, in the same way that upper-caste men or women might not be able to express the situation of the Dalits as someone from the community. Therefore, the book questions who can symbolise the Dalits in the public sphere, to which there can be no easy answers:

‘Can only Dalits’ experience epitomize Dalit consciousness? Should a specific caste identity be required to embody a subject position that is authorized to voice the narrative of caste related suffering?’ (Brueck, 190)

The book is also exhaustive in tracing changes and continuities from colonial legacies, which puts into context the evolution of Dalit activism and its agendas. It does so by drawing upon unconventional sources for research, which in turn opens new pathways for budding researchers in the field. Rawat’s essay on the contradictions in colonial archives and colonial sociology is particularly interesting in this regard. He shows that there is potential to uncover new strands in Dalit history when uncustomary research material is used. For instance, Rawat’s use of agrarian records sheds light on social mobility among the Dalits and how the transition from caste to class occurs. Other such overlooked documents include autobiographies, legal evidence and reports by colonial officials on peasant uprisings. By contrast, conventional colonial ethnographies were based on an all-India level, and, hence, are not only flawed, but also fail to capture the nuances in Dalit history.

The book does have some weaknesses. One is that a focus on politics, literary studies and the sociology of Dalit activism completely misses an economic viewpoint. Moreover, the essays included in the book concentrate on certain regions, especially southern India, which comes at the expense of other areas with a rich Dalit history. As a result, a full discussion on the Dalit Panther movement is lacking in particular, while drawing comparisons between Dalit and African-American struggles.

On the whole, these contributions effectively deal with issues regarding the spatial exclusion of the Dalits. They give a comprehensive account of Dalit history and ongoing struggles, both against the wider society and among the community itself. Dalit Studies raises and tries to answer imperative questions and also demonstrates areas open to further research. It therefore provides an interesting read for specialists and non-specialists alike.

Amal Shahid is pursuing her Masters degree in Economic History (Research). She has an undergraduate degree in History from Sri Venkateswara College, University of Delhi. Currently, she is researching migration and labour history of colonial and post colonial India.

Does social exclusion limit the impact of health care financing reforms in India?

From law to fiction: The double life of an LSE alumnus