Bangladesh is a regional leader on paid maternity leave, offering 24 weeks. Salma Ahmed discusses a recent study into the demographic impact of the extended coverage, which finds a plausible connection between the policy, reduced infant mortality and increased female labour force participation.

With the passage of the Labour Act of 2006, Bangladesh outperforms India and other South Asian countries in paid maternity leave (ML) provisions.

This record improvement in coverage to 24 weeks makes it quite unique among developing countries. Nearly all countries in South Asia have provided at least 12-weeks of paid maternity leave for decades. A study has been conducted on the demographic impacts of the expansion in paid ML coverage. It reveals a strong association between ML length and Infant Mortality Rates (IMR) as well as evidence of ML policy having a positive impact on Female Labour Force Participation (FLFP).

Bangladesh’s 2006 Labour Act, increased the ML length to 16 weeks from 12 weeks, with clarification of eligibility to the first two children. This expanded leave coverage resulted in higher costs for employers since all types of firms, particularly in the formal sector, are required by law to offer paid ML. The government further extended ML to 24 weeks in December 2010, with effect from January 2011. However, the amended law is applicable only to civil servants, who are entitled to ML twice during their service.

The impact of paid maternity leave

Economic theory suggests that various income-and-substitution effects embodied in these programmes should have predictable demographic impacts. It appears, however, that very little systematic investigation has been undertaken along these lines in low-income countries. Existing studies are mainly oriented to industrial countries with respect to child welfare, economic participation of women and fertility (Winegarden and Bracy, 1995).

A study has been conducted on the demographic impacts of the expansion in paid ML coverage using data from Bangladesh. It reveals considerable improvement in Infant Mortality Rates (IMR), Female Labour Force Participation (FLFP) and the Fertility Rate (FR) (Ahmed and Maitra, 2015; Ahmed and McGillivray, 2015; Ahmed and Ray, 2016).

The study addresses the period between 1999 and 2013, in particular, the data before and after the scheme’s announcement (i.e., 2006 and 2010). The data and related information are sourced from the World Banks’ World Development Indicators on the FLFP rate of the 15-64 year age group, IMR and FR by different age groups, as well as the Bangladesh Demographic and Health Surveys (DHS).

Evidence on the following questions is provided:

a) How does the ML coverage affect IMR

b) How does the ML coverage influence FLFP?

d) Did women change their sector of work in response to the ML scheme’s extension in 2011?

With respect to IMR, Winegarden and Bracy (1995) suggest that longer ML enhances infant survival by improving the quality of infant care (e.g., through prolonged breastfeeding). Moreover, there is a positive income effect on households with new-born infants as ML payments replace income that is otherwise lost.

The data from 1999-2013 suggests that IMR dropped without exception (see Figure 1). Eight extra weeks of paid ML reduces IMR by about 5%. As noted previously, this demographic effect seems to work primarily via the resources available for and the quality of infant care. The marked decline in IMR might also be driven by a highly successful child immunisation programme in Bangladesh.

(see Figure 1). This is consistent with Sundstrom and Stafford (1991), who suggest that ML programmes induce more women to enter and remain in the labour market as paid ML increases life-time earnings of working women. This, in turn, should induce greater investment in the education and training of female workers, further increasing their earnings and, thus, their labour supply. However, this finding might be explained by other factors, such as finishing education or became divorced.

The Bangladesh DHS data was used to look for evidence whether completion of education or divorce rates lead to an increase in FLFP. Women indeed have increased their educational credentials (e.g., completion of primary, secondary or higher degrees) in Bangladesh, but not during the period when ML length was extended. For example, the secondary or higher education completion rate of employed women aged 15-49 decreased remarkably between 2004 and 2011 (from 52.7% to 20.2%, but increased to 24.8% in 2014).

On the other hand, the divorce rate of employed women in a similar age group reduced considerably over the same period (from 85.7% to 36.6%) (National Institute of Population Research and Training (NIPORT) et al. 2005; 2013; 2015). Therefore, we can speculate that the increase in FLFP is not associated with completion of education or the divorce rate.

Extended ML coverage is often assumed to induce women to have more births because paid ML reduces the cost of children (Becker, 1991). This increased fertility exacerbates the financial burden on firms, as well as demographic pressures. The latter is often viewed as a social problem in many developing countries. Therefore, the liberalisation of paid ML coverage may produce a trade-off between IMR, FLFP, and FR, a relation that requires evidence.

Bangladesh, like many other developing countries, is a high-fertility country. However, the country has seen a reduction in the average number of children per woman (total fertility rate). This figure was around 3% from 1999 to 2006, and has since fallen consistently, reaching 2.2% in 2013, which is the lowest fertility rate in South Asia (see Figure 2). Similarly, fertility of ages 15-19 fell considerably between 1999 and 2006 (from 112% to 96% per thousand women). This decrease was even more pronounced when ML was extended to eight weeks in 2010.

Therefore, the liberalisation of ML coverage does not appear to increase the fertility rate. This does not seem an unreasonable finding given the rising trend in FLFP and low IMR (see also Winegarden and Bracy, 1995). A falling FR might also be attributable to a minimum term of employment before becoming fully vested in maternity benefits (see Labour Act, 2006). It is tempting to conclude that a downtrend in the FR is also a cumulative effect of the expansion in access to health, family planning, and nutrition services for the poor.

Women could be anticipated to change their sector of work, or enter or leave the labour market, in response to the 2010 ML announcement for civil servants. For example, private sector workers with high fertility preferences could be incentivised to get public sector jobs. Similarly, it could induce non-working women to enter the labour force and disproportionately choose public sectors jobs.

However, neither is apparent over the period of analysis (see Figure 3). There is little or no movement at all in public sector employment during the period when ML length was extended to 24 weeks (i.e., between 2010 and 2013). A number of other significant changes have taken place over time: the percentage of women working in the private sector has risen by 4% while it has risen by only 1% in the informal sector. So, the female workers entering the labour force are more likely to participate in the private sector despite the shorter duration of ML. These findings may well be expected given a downward trend in fertility desires over time. This possibility clearly indicates the need for additional studies on the demographic effects of ML, especially in the public sector.

Seeing a plausible connection between ML policies and demographics does not necessarily suggest acceptable documentation of a direct causal connection. Causality is obscured when social policies expand gradually and in step with local/macro conditions, and when policies in turn are revised in response to demographic behaviour. For example, the rising rate of FLFP might operate through a political process to bring about extensions to paid ML. On the other hand, rising fertility might negatively influence ML policies. These necessarily indicate a reverse causation between ML and demographic variables.

An investigation of a possible reverse causality is outside the scope of the present study. One should thus interpret the findings as evidence of association rather than causation. Nevertheless, the strong association between ML length and IMR is one with considerable policy significance. Moreover, the study shows evidence of ML policy having a positive impact on FLFP.

This article originally appeared on the IGC blog. It gives the views of the authors, and not the position of the South Asia @ LSE blog, nor of the London School of Economics. Please read our comments policy before posting.

Salma Ahmed is a Lecturer in the School of Humanities and Social Sciences at Deakin University. Her research interests are gender inequality, child labour, education, health and fertility in developing countries. Much of her research has focused on the Indian Sub-Continent. She received her PhD in Economics and a Master of Philosophy (MPhil) in Economics, both at Monash University, Australia. 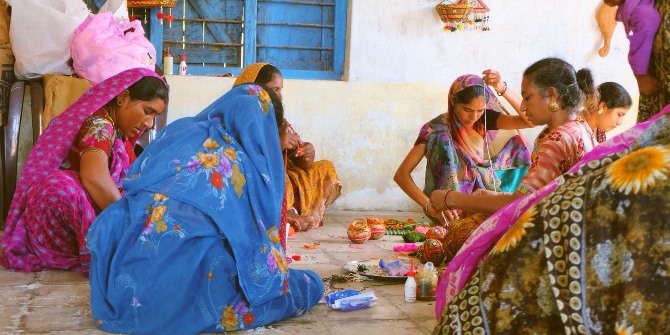