The Government of Sindh must urgently come up with measures to improve land tenancy to ensure the end of bonded labour. Drawing on fieldwork from the region, Abdul Waheed Jamali explores the plight of bonded labourers and the failures of the current Sindh Tenancy Act.

Three camps for former bonded labourers have been established near Hyderabad, the second largest city of Sindh province of Pakistan and around 200km north of Pakistan’s coastal city of Karachi. These camps have been established by local NGOs with the support of international aid agencies and Government authorities for the families to live there freely once they were freed through the Court order under The Sindh Bonded Labour System (Abolition) Act.

We managed our visit at one of the camps, namely Azad Nagar; which means ‘land of the free’. Approximately 100 families are living in the Azad Nagar Camp located at Tando Hyder. Whilst they are no longer bonded, they are unable to feed themselves and their children more than twice a day, and are also socially isolated and economically poor. Originally these families belong to the indigenous tribes of Sindh province and they were previously sharecroppers. What made them vulnerable and why they were bonded?

This article is an attempt to illustrate the reason of bonded labour in the agricultural sector. There are various reports on bonded labour, landlessness and poverty in Sindh, most of them reveal that more than 75 per cent of Pakistan’s poor live in rural areas. The distribution of assets in rural areas is highly skewed, particularly with regard to access to land and water. This has resulted in high chronic rural poverty, which has grown in recent years due to slow agricultural growth as well as the damage and losses to crops and livestock caused by natural disasters over the past decade.

But tenants and land rights experts consider that bonded labour in agriculture is a failure of tenure and these camps are the examples of the failures of The Sindh Tenancy Act (STA), 1950 and its subsequent amendments (the most recent of which was 2008-2013) which regulate the individual relationship between landowner and tenant and their sharecropping arrangements and establishes the rights and obligations of each party; while the administrative regulations at the district level dictate how the different service providers should engage with them.

Mr. Tanveer Arif Chief Executive Officer of SCOPE explained that landlessness and poor tenure arrangements are reasons behind the bonded labour in the agricultural sector. According to Arif, the provisions of STA have not been systematically implemented, leading to a system where the individual landholdings operate in isolation. At the same time, many of its provisions are no longer appropriate to address contemporary issues, due to the socio-economic changes that have occurred since its promulgation.

An interview was also conducted with tenancy veteran and senior peasants’ rights leader Mr. Taj Mari. Mr Taj emphasised that the Sindh Tenancy Act (STA) 1950 was not amended to address big lacunas and problems, which were a cause of injustice for peasants in their relationship with landlords. He lamented that Sindh’s political, social and administrative structure was controlled by feudal and landlord families; thus, pro-peasant amendments in the laws were not possible. Therefore in the past, all attempts made to improve the tenants’ conditions through land reforms and redistribution have fallen short, mainly due to the lack of political will. 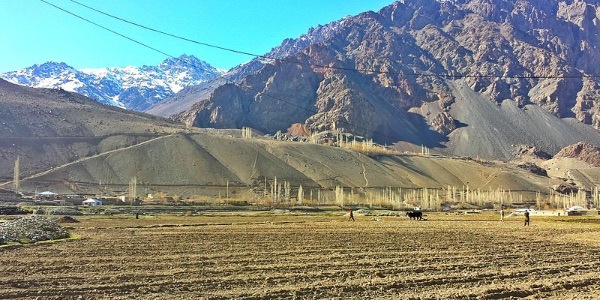 Dr. Ghulam Haider Malokhani Executive Director of local NGO Green Rural Development Organization (GRDWO) who arranged the visit to Azad Nagar bonded labour camp presented the challenges related to the Sindh Tenancy Act. Dr. Haider said that the landlords keep the accounts, transactions are rarely transparent, and landlords often over-value inputs and under-value outputs. Tenure contracts tend to be oral, with a minimum contract period of one year. In this way, sharecropper’s extremely low literacy rate inhibits their control over any entities. Tenants fall into debt through advances they receive from the landlords in cash or in kind to meet costs of cultivation or simply to cover regular household consumption requirements. The expectation is that the account is settled at the time of the harvest, but in reality the debt accumulates from one year to the next as the share of the production is not enough to survive, let alone pay off the loans. Dr. Haider also said that tenants are not allowed to leave their landlord unless they clear their accumulated debt, and therefore become “bonded” labour.

As well as fieldwork, a literature review was also conducted which revealed that most of the peasants lack clear and legally enforceable tenure over their farmland upon which their livelihoods depend, leaving them vulnerable to poverty and exploitation. The existing sharecropping tenancy system is historically deep-rooted and perpetuates the deeply entrenched poverty of tenants and farm labour through unbalanced revenue-sharing and cost-sharing arrangements and a complex system of dependencies.

Therefore; it is highly recommended to the Government of Sindh that they urgently come up with improved land tenancy in Sindh. Because responsible governance of tenure ensures secure access to land and water, in particular for female and male smallholder farmers. Pro farmer amendments in Sindh Tenancy Act and their proper implementation are in need for pro-poor agricultural development and the sustainable management of natural resources with a positive impact on environment biological diversity. This would also contribute to the overall aim of improving food and nutrition security, which are key development objectives of international community and Government of Pakistan for fulfilling the commitment for achieving the Sustainable Development Goals and align the STA with the Voluntary Guidelines on the Responsible Governance of Tenure of Land, Fisheries and Forests.

Abdul Waheed Jamali is a development professional with 15 years of experience in projects relating to land management, agrarian reforms, sustainable agriculture, right to food, land and natural resources.  He holds a Masters degree in Sociology. He can be reached at waheedjamali@hotmail.com

Bad Behavior has blocked 3396 access attempts in the last 7 days.