In Broken Ladder: The Paradox and Potential of India’s One Billion, Anirudh Krishna offers a ‘worms eye’ view of development, arguing for policy that is attuned to local locations. Whilst gender and state-based differences could be explored further in relation to the problems of development in India, Krishna provides insight into the challenges of contemporary Indian development, Sohini Kar finds.

In July 2018, India overtook France to become the sixth largest economy in the world, representing a particular vision of development driven by urban, globalised India. Yet, recent events such as the Kisan Long March—35,000, primarily Adivasi farmers, left out of this “new” India who marched to Mumbai—require revisiting the celebratory claims of development. The farmers marched on the city most symbolic of the globalized, “shining” India, to demand the legal recognition of land rights, loan waivers, and also to protest the river-linking project that would submerge their land. Whether seen as a Left-wing political stunt—as characterized by the Right—or a grassroots social movement, the Long March reignited debates about rural India, in part by bringing, quite literally, those who are so often forgotten in urban India into the forefront of urban consciousness.

Anirudh Krishna’s Broken Ladder: The Paradox and Potential of India’s One Billion  makes for both timely and prophetic reading. The book is a rich tapestry of voices from what Krishna calls India’s “rupee economy,” that of people without specialized education, who do not own a “globally scare resource.” Unlike the people who are benefitting from India’s rapid economic growth since Liberalization—or those in the “dollar economy,” Krishna focuses on what happens to those who are excluded from access to this global economy. The book not only gives an overview of the current conditions of the “rupee economy,” but also a range of theoretical and methodological approaches to understanding development in India, and in other high-variance societies, where inequality is shaped not only globally but also domestically.

Broken Ladder engages an impressively diverse set of methods to address questions, from media and textual analysis, to quantitative and qualitative surveys and interviews. Throughout the book, Krishna offers what he terms a “worms eye view” of development in India. Krishna presents us with an ethnographic lens that attempts to understand the complex set of conditions in which the poor live and survive, drawing closely on those who experience poverty, marginalisation, social mobility, and the lack thereof. But what is particularly compelling about the approach Krishna has toward addressing the diverse range of issues is that many of the questions themselves are driven by those who are most affected by the issues, and in the book, we get a sense of the author working with his interlocutors.

While Broken Ladder is about poverty in India, the book draws our attention to social mobility. In other words, there is not a static view of poverty, but rather a dynamic one that attempts to understand both how people can move out of poverty, and also how they can fall into it. There is awareness of the precarious conditions of working in India’s informal economy; that the condition of being above the poverty line is a tenuous one.

As the title suggests, while a broken ladder can constrain a person’s ability to move up the social ladder and to move out of poverty, the lack of a step can also cause people to fall rapidly down the social ladder and into poverty. Families like that of Chintalamma, in Chapter 4, might—if not wealthy—be getting along until illness or an accident strikes the household. The provision of safety nets then becomes key to addressing poverty in India’s rupee economy. Thus, it is a question not just about how to get people out of poverty, but indeed, to keep people out of poverty. Quite often, poor households have little recourse to protection, other than more debt, triggering a vicious cycle and downward spiral to poverty.

Simultaneously, Krishna demonstrates that upward mobility also cannot be addressed by simplistic fixes. For instance, providing education alone does not enable people to move out of poverty. This is shown by the case of Keshu, who manages to complete secondary school, but is unable to find work apart from the kind of day labour that his peers who had dropped out of school years earlier do. Upward mobility, in this case, requires the acquisition of certain kinds of attitudes, experiences, and information, as explored in Chapter 6. What is demonstrated in the cases of those who are able to move up the social ladder is access to certain kinds of information and encouragement to be able to do so. As one interviewee explains in the book, it is not that the poor lack talent or intelligence, but that “no one in my circle dreamed big.” Thus, aspiration is constrained by class, not simply in terms of elites excluding the poor, but the way in which exclusion can become self-perpetuating through internalisation of the belief of who can and who can’t make it. What is necessary for social mobility is not just the infrastructure of education, but the ability for the poor to imagine the “big dreams” in the way that elite and upper middle-class children are taught to from birth. 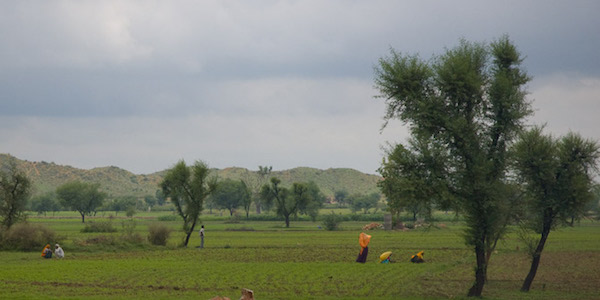 Yet dreaming big alone is not sufficient in the current labour market, which, as Krishna points out, cannot sustain the millions currently in the informal sector. Thus, Broken Ladder also raises the challenge of contemporary development, whereby earlier models of industrialisation cannot provide the kind of employment opportunities that would create the stepping stone to the middle class. In the context of technologically-driven growth, the available jobs will increasingly require greater skills development. Further, as the book argues, these challenges are increasingly felt as the rural poor migrate to the cities in search for work. The problem, as Krishna points out, cannot be solved without addressing the rural problem alongside that of urbanisation. Thus the geographic context of poverty is one that must be addressed, in what Krishna identifies as the “beyond 5km villages” or the villages that are located more than 5kms from a city.

The book argues ultimately for policy that is attuned to the local conditions, rather than homogenous, and national-level diktats that are at odds with the specific context. One of the intriguing suggestions that Krishna offers is that of “hurrying slowly”: to act with urgency, while also taking the time to be deliberate, thoughtful and reflective. This evocative framing requires development policy to attend to the very urgent needs of India’s poor and struggling; yet it is also a caution against simplifying problems; and argument for understanding the complex conditions that perpetuate forms of inequality and discrimination. And indeed, the research that Krishna discusses in this book reflects this notion of “hurrying slowly,” addressing pressing concerns, while delving deeper into each question and unpacking the issue with attention to context.

While Broken Ladder is attentive to the diverse range of experiences of the poor in India, given the extent of gendered inequality in India, the book could perhaps have engaged little bit more specifically about women. In particular, along with issues of rural employment and informal employment that the book addresses, one of the striking features of India’s recent development has been the worrying fall in women’s employment. Thus, along with the broken ladder, how do we address the glass ceiling that women face?

The book addresses rural and urban differences, but India is also becoming increasingly unequal by state. What do we do about the challenges of state-based differences, when addressing inequality? While there are challenges to national-level policies, how do we ensure equity across states? That is, given the increasing decentralisation of development to the state-level when there is also the divergence in levels of poverty between states, as some are able to pull ahead much faster than others? Should there be more mechanisms for centralised redistribution to states? These two points of gender and state-based differences could perhaps be explored further in relation to the problems of development in India. Ultimately, however, Krishna offers insight into the challenges of contemporary Indian development. Broken Ladder forces readers to confront the complexity of social mobility and sustained poverty reduction.

You can read the Broken Ladder workshop report here and an interview with Professor Krishna here.

Sohini Kar is a socio-cultural anthropologist focusing on economic anthropology of South Asia. Her current research focuses on the impact of increasing financialization on poverty and development programs. Prior to joining LSE, Dr Kar held a postdoctoral position as Harvard College Fellow in the Department of Anthropology at Harvard University. She holds an MA and PhD in Anthropology from Brown University, an MA in Social Sciences from the University of Chicago, and a BA in Economics and French from Columbia University.

Bad Behavior has blocked 2937 access attempts in the last 7 days.