Whilst men working in construction may advance their positions and income, the lack of options experienced by female construction workers is stark in comparison, underlining the continuing reproduction of gender inequality within the industry. However, this can partially be addressed by utilising industry and state resources. Rebecca Bowers writes.

My doctoral fieldwork which took place between 2014-2016 in Bengaluru, Karnataka, focused on the forms of mobility female construction workers were able to experience in the urban milieu. Estimates put the percentage of female construction workers between 30 (Devi and Kiran 2013, WIEGO) to 51% of the total workforce, but there is a dearth of up to date information on industry gender composition, and women workers are often undercounted in Labour Force Participation Rate surveys (see India Labour and Employment Report, 2014: Workers in the Era of Globalization p53).

The manual labour undertaken by women in construction (sifting and breaking stones, mixing cement, sweeping, and lifting head-loads of bricks and other materials) is something they are destined to perform for the rest of their working lives. Male workers starting at the bottom rung however, may learn a trade or alternatively, increase their income by becoming labour contractors (maistris). For women these pathways remain off-limits.

Whilst construction sites may appear the opposite, for women I argue, they are effectively an extension of the domestic sphere. In many cases families reside there – further erasing presumed capitalist boundaries between workplace and home. Husbands are paid their wife’s wages, applying a layer of concealment to the perceived monetary value and visibility of women’s work.

Women are paid less than men for performing the same work, and not a single woman I met during fieldwork was paid equally, a fact that is frequently and repeatedly corroborated (see Devi and Kiran 2013, Reuters 2015 and WIEGO). Moreover, women are often the first to be laid off or underemployed, and many women I spoke to were unable to find more than three days a week of work. Indeed, a recent report claims that share of employment days for women workers has been decreasing since 1983, when it was at 18% of total person days of employment in the industry versus 10.5% in 2011-12.

The most significant form of discrimination of all is the fact that female workers are unable to ascend in the industry, as Nagamma, a greying women in her forties stated, ‘If we learn anything else we won’t get jobs’. Vinita Shah also highlights this in Women Building Workers: An Area Study in Bombay, recalling a conversation with a female worker, ‘The Maistry did not allow me to even lay a single tile or handle tools. He rebuked me and said that if women started doing skilled jobs men would have to wear bangles and be helpers’ (1996:13). 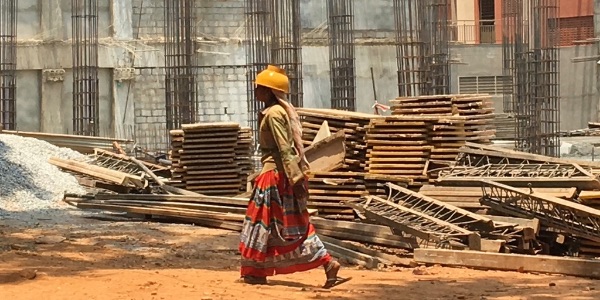 In the past, to challenge such gendered hierarchies a local NGO had attempted to train women as masons for an ILO (International Labour Organisation) project, but this scheme had long since been abandoned with Sandeep, the former co-ordinator of the project, describing the resistance they received on worksites, ‘the man who is the senior person there he tries to come to us because she is a lady and you know, there are all of these workers thinking ‘how can a woman do these things?’’ Another comment further emphasised the open hostility to training women within the industry; ‘You should have done [sent] some young boys to train instead of doing all of this’.

Such was the entrenched nature of discrimination that despite claims such as ‘I’ve done everything men are doing now’, research participants including the few unionised women I met (who were themselves fighting for equal wages) expressed a self-doubt of their ability to learn whilst acknowledging the restrictive hierarchy of the industry, with one woman stating ‘We’re not men, we can’t do that’. It was not necessarily that the desire to learn was lacking, rather that being able or ‘allowed’ to learn a trade was inconceivable.

However, local unions are attempting to build capacity in other ways too – holding the state to account for its failings to provide welfare for both retired and active informal workers. Although many unions undoubtedly remain masculine spaces (see Breman 1999 , Fernandes 1997 and Roy 2003) there is an emerging pattern as Rina Agarwala (2013) has observed, of women in the informal sector organising whilst demanding their needs are met by the state in lieu of adequate wages.

Indeed, in AKKKU and AIKYATA two affiliated local unions for construction workers and retired informal sector workers, I found that many women featured at the forefront of protests, many of which were directed at the state for failing to deliver or even withdrawing welfare schemes, and were not only active participants but also organisers in union activities and politics. ‘They [the union] tell us to be united. That we should raise our voice when someone does wrong to us’, one member informed me. 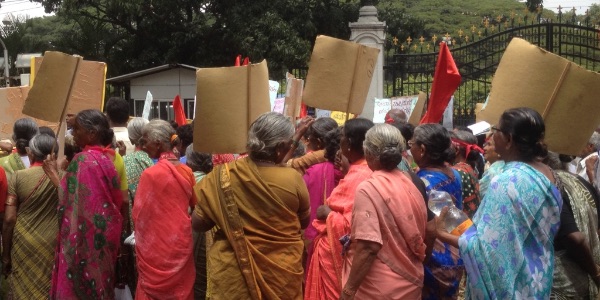 The Building and Other Construction Workers Act and the subsequent Cess Act passed in 2006 in Karnataka State, theoretically provide a wealth of potential opportunity via their legal mandates and considerable funding, with the Karnataka construction workers’ welfare board levying a 1% cess of every project valued over one lakh rupees. However, with its failure to utilise funds coupled with accusations of corruption, the board is a long way of achieving its most basic function, let alone further more ambitious initiatives.

Despite their payment of the cess, many property developers (much like the workers themselves) remain unaware of the construction workers’ welfare board. If better informed, companies have the potential to raise awareness within the industry whilst also being better positioned than grass-roots organisations to ask questions of the welfare board. Why might they get involved?

In 2014 the Corporate Social Responsibility Act was passed, mandating companies with an annual turnover of over 10 billion rupees to contribute 2% of profits to CSR. Companies wishing to fulfil meaningful Corporate Social Responsibility (CSR) activities within industry focused areas such as construction are now not only encouraged but compelled to allocate a higher share of their wealth and resources. According to Anu Aga, this creates new opportunities and spaces for effective public-private partnerships to function.

More robust and effective regulations are also required to provide creches and school access for children. State welfare boards need to liaise and allocate a portion of their substantial funds to existing departments and potentially, NGOS, for the provision of this. The allocation of state and private company funds must also be made to NGOs for on the ground implementation – particularly in seeking out migrant workers who are harder to access.

In the case of programs for up-skilling female workers, concerted industry-wide education and awareness raising efforts for workers of all genders are required to also ensure that once trained, women actually have trade jobs to go to. Lessons learned from prior attempts can be sought from previous organisers. Such measures are certainly not impossible in larger property developers and construction companies, which have the resources to provide and monitor such schemes – particularly those with workers in company provided accommodation. Companies should also better monitor payment methods to ensure that women are being paid individually.

While women in the construction industry are continually discriminated against, they are certainly not unaware or passive about their status, as I have attempted to illustrate. What I also found during ethnographic research however, was that the mobilities and aspirations of female lives spent in construction often became subject to its masculinised spaces of skill and productivity, from which they were excluded.

Although this article may paint a bleak picture regarding the status of women in construction, as some of the prior examples suggest there are existing (and largely external) initiatives to improve women’s mobility albeit with varying success rates. If meaningful change is to occur it must come from within the industry itself. Whilst there is no magic bullet for improving the career prospects or quotidian lives of female construction workers, tripartite partnerships that utilise existing institutional apparatus; public and private funding (and other resource forms); and the expertise of grass-roots organisations, have the potential to make significant inroads into addressing this.