The move from Sri Lanka to Britain signalled a breakaway from past associations of identity and rootedness which Tamil Hindus had to contend with. The quest for Eelam is now thrust into the makings of a new guru movement striving to gain traction, writes Dhruv Ramnath.

In the 60s, Britain was seen as welcoming of the affluent Sri Lankan Hindus who were allowed to settle in Britain. These persons were middle-class, educated and extremely fluent in Tamil. This followed the colonial legacy that betrayed the Sri Lankan Tamil community, bequeathing to them a search for a homeland outside Sri Lanka. In the 1920s, the British favoured the Sinhalas in electoral representation, sowing the seeds of communalism and resentment against the minority Tamils who were ignored and affected by the estrangement they had to undergo as a result of Sinhala hegemony since Independence. The rise of a militant fundamentalism for a separate Tamil state called Eelam teetered from this situation between the two populations inflamed by divisive colonial implementations that marginalised the Tamils.

Since then, the civil war in Sri Lanka left thousands of thousands of Tamils stranded on two islands. The move from Sri Lanka, an island, to Britain, another island, signalled a breakaway from past associations of identity rootedness which as a minority group they had to contend with. During the Sri Lankan civil war, a select portion of the Sri Lankan Tamil community were obliged by the diktats of religion to follow the tenets of religious prescription that they were ensconced in within their homeland. These were obtained from pan-Hindu ways of life according to one of my informants, in London post-2010. Having led the way for many more Tamils to engage with the figure of the avatar-guru who avowedly claims to be an incarnation of Lord Murugan, the marketing tool of promoting god forges exceptional interacting mechanisms that birth a ‘made community’ in Britain, with alliances cemented between two nations in South Asia, India (where the Baba resides most of the time) and Sri Lanka (whose histories are replete with narratives of war and violence).

The Sharavana Baba movement in London and beyond

Why has the  Sharavana Baba movement in London become fundamentally a Tamil phenomenon? The reasons for this are twofold. Firstly, the movement borrows from Hindu religious practices and recreates a Hindu deity called Lord Murugan exclusively for the Tamils.

Secondly, Tamils have for aeons seen Lord Murugan as their presiding deity and the Dravidian tradition which is inspired by a Tamil sense of belonging, is inevitably a staunch pro-Murugan mission if their adherents are to believe in any god at all, for all the sites of Murugan worship are spread out on lands where Dravidian kings once conquered. Hindu temples in Sri Lanka, Malaysia and Tamil Nadu are central sites of Murugan devotion and thus Tamils are attracted to Sharavana Baba for he is believed to be an incarnation of Lord Murugan.

This unique feature of having a particularistic ‘divine’ identity gives Sharavana Baba a global appeal as his manufactured charisma hauls a diasporic Tamilian population to envisage Murugan in him. Those Tamils who are displaced therefore, naturally seek solace in Murugan as this god appeals to them more than any other. Whilst internal divisions are as much a problem in their lives as it is to other diasporas around the world, it is the clear divide between ‘outsiders’ and ‘insiders’ that underlines the practice of this diaspora. The few ‘others’ who may wish to be a part of this group fit in but as ‘outsiders’. They show no knowledge of Tamil so Sharavana Baba’s Sri Lankan Tamil following recreates novel ways of being in the settled land. His followers even recruited Labour MP Wes Streeting for a charity walk, displaying that links between religious leaders, diasporas and politicians are solidified through social service. This group reinforces their faith in Hinduism and builds upon the two situations in which they find themselves, one of belonging to the homeland and the other the desire for what Parvathi Raman has called “diasporic recognition“. 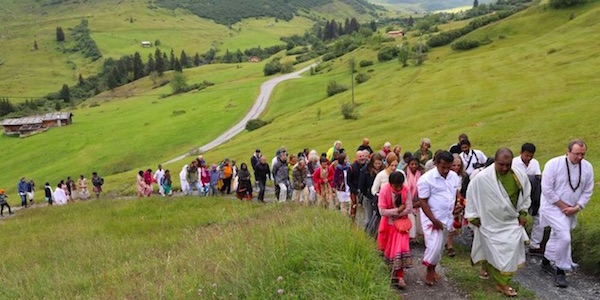 In the process of walking for the blind (see article), Sharavana Baba leads the Tamils to a zone filled with solace through social service. He is their creator, commander and titular fief. In order to globalise the movement, Sharavana Baba must make full use of political relations and seek out avenues by which potential followers are inducted into his fold. The quest for Eelam is thrust into the makings of a new guru movement striving to gain traction, and it modernises by allowing women to head some of its main centres. Social justice is replaced by social service. Although steeped in Hinduism and Murugan culture, the Baba attends to the demands of an Eelam and a Sri Lanka beyond the political, yet paradoxically furthering political goals by not mentioning them. The Tamils channel their piety towards their leader as an object of devotion, and perceive themselves as subjects of lost origins. The plight of this community is subsequently transmogrified into a movement headed by a leader whom they consider a living god.

The highlight of the experience in London is unmistakably geared towards the remaking of a project for Dravidian politics but highly spiritualised, it is subsumed under the ‘correct’ method of seeing god as guru who is supposed to attend to larger Hindu affairs. The area they quest for is the “realm of the heart” embedded as Eelam whose commander-in-chief is Murugan as the Baba.

Whilst the Baba does not speak of Eelam in his hagiographies, he can be examined and identified in such a positioning of the political and spiritual where Eelam is the refuge this community finds in him. The nation, one existing as Sri Lanka and the other of a Sri Lanka ‘to come’, is a plan for Tamil motives. The ashram in London is the beginning stage of sustaining the strong bonds of affiliation and subtle resistance to Sinhala hegemony where Sharavana Baba speaks, like Mata Amritanandamayi and Sai Baba, in a language of devotion, spirituality and neo-Vedanta (an orthodox school of Hindu philosophy).

Scholars like Meera Nanda posit that globalisation is making India more Hindu, so new gurus are expedient in their singular device of adopting a couched spirituality in a palpable Hinduism though claiming to be ‘spiritual’ and hence ‘beyond religion’ at the same time. The concept is paradoxical, similar to the proposals of devotees who are not Tamil nationalists but being devoted disciples, spread their leader’s messages and work with other Tamils across the globe. These identities intertwine with each other where nations and religions are politicised for a robust stakeholdership in matters concerning the good life. These individuals are upwardly mobile, and their knowledge of the world comes from their collaborations with diasporic societies, especially on websites such as lankasri.com.

Ideas of community do transcend the nation-state. Sharavana Baba does not address the issue of Eelam nor does his hagiography state the nuances of the politics of Sri Lanka, or of the Left and Right. The movement is fed by Hindu “structures of feeling” paving the way for Murugan-based processes. This ostensibly bridged moment of religion and diasporic recognition has potential ramifications for pro-Eelam discourse by phenomenally activating the desire for a new diaspora.

On the one hand, the movement’s literature, brimming with pedestrian utterances, brackets the guru as an avatar, and on the other hand, the adherents in London assemble themselves in relation to what one of their staunch devotees herself told me is the guru of the Sri Lankan Tamils. Their refuge in Eelam evolves into a metaphor for a contrived community of like-minded individuals who are pulled by historical and cultural operations in the workings of their networked lives.

In my own hagiographical film on this movement, I encountered several devotees in London who told me of their experiences and the ways in which their lives had changed; but I edited out their inner secrets of belonging to a diaspora, for that needs official sanctioning to become hagiography. What would devotees think of this article? I do not know. Nevertheless, as the result of the linkages between Sri Lankan, Indian, and British cultures and histories, there now exists,to use Tulasi Srinivas’s phrase, a compelling connectivity between Asian and British “worlds of wonder”.

This article gives the views of the author, and not the position of the South Asia @ LSE blog. Please read our comments policy before posting.

Dhruv Ramnath is currently pursuing a Master of Arts in Social Anthropology at the School of Oriental and African Studies.

Bad Behavior has blocked 2352 access attempts in the last 7 days.