The British Museum is a great place to spend a morning or an afternoon for free. There are many free exhibitions ranging from Greek sculptures to art originating in North America. As a student of MSc Empire, Colonialism and Globalisation, however, it is important to appreciate the artefacts with a critical eye – many of the items on display have been taken during the colonial era for almost an exclusively European gaze, and since the decolonising period, they have still not been returned to their place of origin. Some items were part of tentative ‘legal’ acquisitions, but others were taken during British raids.

There’s no getting around this uncomfortable history, particularly as a historian who enjoys visiting museums. The purpose of this blog is to highlight how studying the history of empires and colonialism at LSE has given me a new perception of the history of ‘things’ and the power they hold for memory, identity, and culture. Historical artefacts are fascinating on their own because of their origin and their original intended purpose – but I am also fascinated by their contextual history of changing ownership, expatriation, and display for certain audiences. 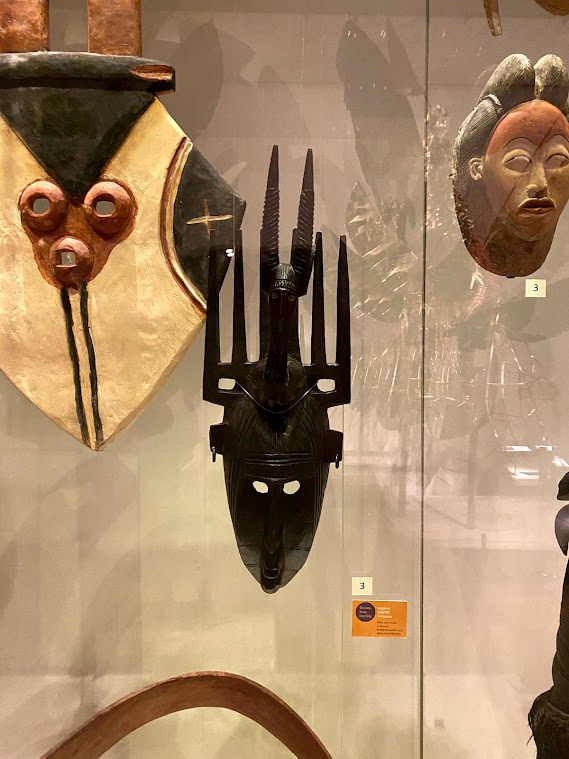 A mask such as this was typically worn by the Bamana men of Mali, but the masks could be representative of male, female, or androgynous identities. Male masks have 3 or 6 horns, female masks have 4 or 8 horns, and androgynous masks have 2, 5, or 7 horns. Through colonisation, however, the representation of gender and sexual diversity were often suppressed. Part of this process included the introduction of Christianity, which restricted sexual fluidity and made homosexuality illegal. Seeing this mask and reading about its history reminded me of the long-term effects of colonialism, such as the fact that homosexuality is still illegal in many African countries as a result of colonisation. The process of decolonisation happened only very recently, and its pervasive influence can still be seen today. 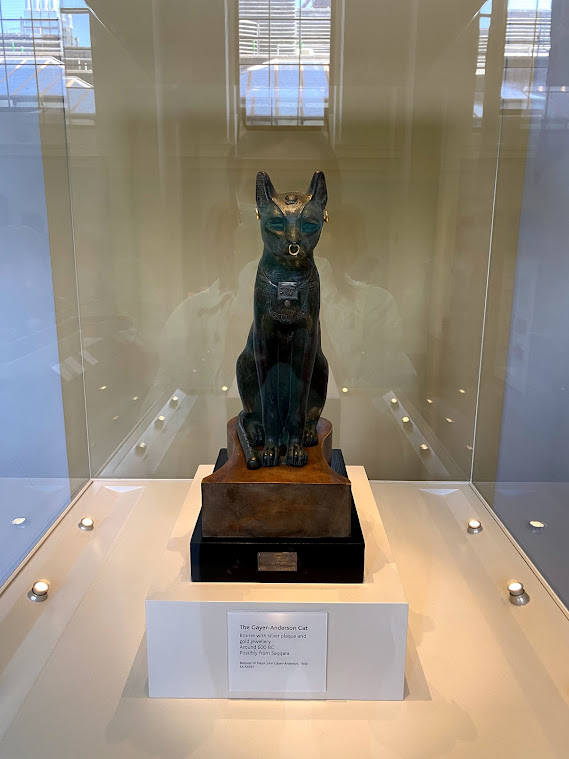 This cat is in the Egypt exhibit and represents the deity, Bastet, from the Late Period of Ancient Egypt. Adorned with precious metals, this cat was probably commissioned by a wealthy patron to donate to a temple. The cat was acquired by Major Gayer-Anderson who, in the 1930s, undertook serious repairs to the cracks that had formed on the statue.  The fact that the cat is named after the person who restored it is a reminder that when history changes hands, it can become a small part of British history through its colonial ties in Egypt. Furthermore, the Gayer-Anderson Cat sparked my curiosity into the fact that colonialism is not just about resource extraction or geopolitical strategy, but also the powerful imperialist influences on the academic understanding and construction of history. 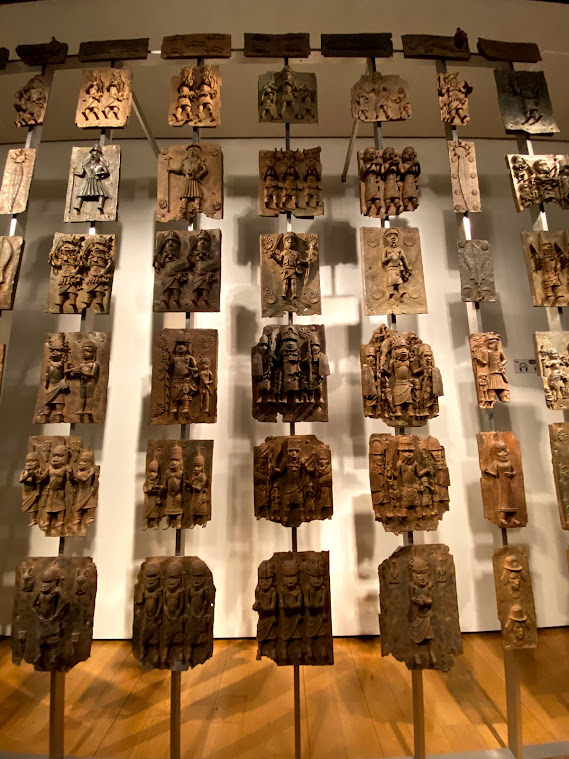 The Benin Bronzes have become highly charged symbols of colonialism, making them some of the most controversial artefacts on display in the British Museum. They are a collection of intricately carved sculptures dating from the C16th in the West African Kingdom, Benin, and were carved by skilled specialist guilds for the royal court of the Oba (king). Some of the rituals and ceremonies depicted in the Bronzes are still performed today in Edo State. The British colonised Benin from 1897 until 1960, which is now within the Federal Republic of Nigeria, and through looting and auctioning, the Benin Bronzes ended up in European collections. In the wake of the Black Lives Matter protests in 2020, the new owners of the Benin Bronzes in Germany, Scotland, and France have committed to repatriating the artefacts. However, the British Museum remains determined to permanently display the Bronzes here in London. From my research into Nigerian calls for their repatriation, the Benin Bronzes are a reminder of colonialism and its lasting effects on African society. 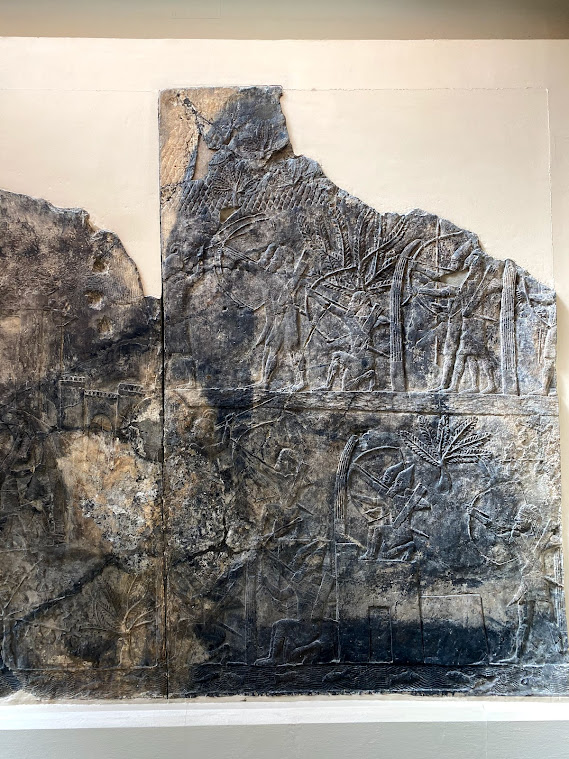 If you continue walking through the Egyptian rooms, you will reach the beautiful exhibit of Assyrian sculptures and stone carvings. Some of the highlights include statues of winged lions and the interior stone carvings of the palace of the neo-Assyrian King Ashurnasirpal II in the C9th. These carvings indicate narratives, portraits, inscriptions, deities, and spirits that featured in Mesopotamian mythology and art. The majority of these artefacts were excavated during the mid-nineteenth century under the Ottoman Empire, and contemporary British archaeological and diplomatic interest, combined with considerable financial backing, led to the largest collection of Assyrian carvings being held in the U.K., particularly within the British Museum.

I enjoy looking at physical historical objects. It enriches my understanding of history and is a pleasant afternoon pastime. However, my interest does not compare to the nations which have experienced colonisation and have lost parts of their culture through the loss of priceless historical artefacts. By removing a nation’s historical artefacts, we strip away that nation’s ability to tell its own narrative outside of a colonial context, which is an essential aspect of nation-building.

This year, my master’s degree gave me a greater insight into the importance of objects, the lasting legacy of colonialism, the symbolism of repatriation, and the excluding nature of the Eurocentric gaze. Yes, the Gayer-Anderson cat and the Benin Bronzes were created outside of the colonial era, but they were acquired as a result of colonialism and displayed for a largely European audience. If you intend on visiting the British Museum, challenge the idea of ownership and consider the cultural, religious, and historical value of the objects you are visiting.

I'm a Master's student living in London and studying MSc Empire, Colonialism and Globalisation at the LSE.

A Tale of Careers and Networking…

Bad Behavior has blocked 690 access attempts in the last 7 days.