Earlier this week, President Obama announced that he would ask for a Congressional vote on any potential military intervention in Syria. Ryan C. Hendrickson writes that Congress did not force Obama to seek legislative approval, and that even before the announcement many of Congress’s key leaders had already fallen in line with the President’s desire for a military strike. Now, we are witnessing strong pressure from the congressional leadership with those on both sides of the political divide lobbying the House and Senate to support their commander in chief.

Last Saturday, President Barack Obama shocked many in the United States, and apparently most of his senior foreign policy advisors, by deciding to turn to Congress to request their support for a military strike on Syria. While American commanders in chief have previously requested congressional backing prior to military action abroad, much as President George W. Bush did after the terrorist strikes on September 11, 2001, and prior to America’s invasion of Iraq in 2003, since World War II American presidents have often asserted unilateral powers as commander in chief, and Congress has generally followed along with the President’s military desires.

To be sure, Congress was given considerable war powers to check the president, including most importantly, the Constitutional power to declare war. America’s founding fathers were quite clear, in that they desired that no single man (e.g. the president) would be permitted to enter into wars abroad unless he was responding to “repel sudden attacks” against the United States.  Otherwise, it was the peoples’ branch who would determine if America would enter war. 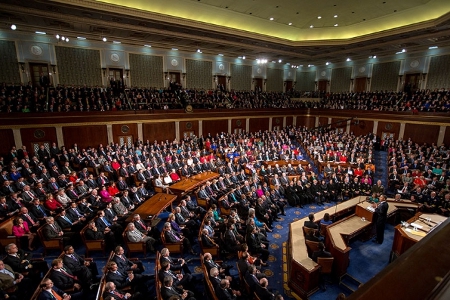 Yet with the Cold War’s onset, America’s presidents became increasingly imperial, waging wars, bombing abroad, using force, and invading foreign states, with little “check” from Congress.  Presidents asserted that as the United States commander in chief–with communist forces challenging American security—that they were empowered to determine when, if and how the United States will use military force. Since many of America’s military actions have been domestically popular, at least at the onset, Congress largely abdicated these war powers to the president. Over time, many members of Congress became complacent and content to let the president make all critical military decisions for the United States.  Whether it was President Clinton’s military actions in Bosnia and Kosovo, or President George H.W. Bush’s invasion of Panama in 1989, or Ronald Reagan’s war in Grenada in 1983, Presidents have assumed unilateral military authority, which Congress has ceded to the executive branch, all of which makes it so interesting that Obama explicitly turned to Congress to seek their support on Syria.

What is taking place now in the United States Congress, however, echoes past practices of Congressional deference to the commander in chief, which is especially evident in the behavior of many of Congress’s leaders. Even before Obama turned to Congress to request its support, House Minority Leader Nancy Pelosi rushed to Obama’s side, indicating her backing for military strikes absent a vote from Congress. Senator John McCain, the ranking minority member of the Senate Armed Services Committee, along with his long-time backer Senator Lindsey Graham, were similarly ready to start the bombings without Congress’s approval. House Foreign Affairs Committee Chairman Howard “Buck” McKeon was also ready to strike prior to Obama’s Saturday surprise. Speaker of the House John Boehner was calling for more consultation with Congress, but also was taking no action to bring members of the House back from their summer recess. Much as he did during the congressional debates over Libya, Boehner was working to avoid any explicit actions by Congress that would in any way force the House to take some constitutional and political responsibility for the potential strikes to come. Thus, it is not at all evident that Congress “forced” Obama to seek for their legislative approval; many of Congress’s key leaders had already fallen in line with the commander in chief.

It is also instructive to examine those members of Congress who were most “assertive” vis-à-vis the president prior to his Saturday surprise. Congressman Scott Rigell circulated a letter among his colleagues to request that Obama gain Congressional approval before taking military action, which squares with the general principle of checks and balances. Rigell should be commended for his efforts to at least request a vote, though his efforts only generated a whopping 33 signatures, or 7.5 percent of all members of the House of Representatives! Most members of Congress wanted nothing to do with that letter.

Now that the question has been placed with the House and Senate, forcing Congress to explicitly take a stand, we are witnessing strong pressure from the congressional leadership to support the commander in chief. Before the House proceedings even began, Speaker Boehner signed on with Obama. House Republican Majority Leader Eric Cantor also has expressed his approval for a military response, so Boehner and Cantor will work to secure Republican votes, and Pelosi and House Minority Whip Steny Hoyer (who also agrees with Obama also) will work the House Democratic rank and file to back the president. By some accounts, Senate Majority Leader Harry Reid, who also supports Obama, is also rushing to ensure a Senate vote on this issue as soon as possible.

These debates will be contentious, and many members in the House and Senate will vote against President Obama’s plans, but the practice of deferring to and empowering the commander in chief by Congress’s leaders appears well entrenched.