The U.S. should encourage rapprochement and reconciliation between the Sunni and Shia states of the Middle East.

The U.S. should encourage rapprochement and reconciliation between the Sunni and Shia states of the Middle East.

In May, Middle Eastern leaders met with President Obama at Camp David for a meeting of the Gulf Cooperation Council. While many conservatives have criticized the summit as a failure for the lack of a U.S. commitment to Sunni states against the potential threat from Iran, Harry C. Blaney argues that these critiques are ideologically-driven and do not reflect the realities on the ground. He writes that what is now needed is a larger region-wide security framework for all countries in the region and continued efforts towards solving long-term conflicts.

It seems many commentators had already drawn up their criticism in advance and did the same following May’s Camp David Middle East Gulf Cooperation Council (GCC) Summit that President Barack Obama had called to address the many conflicts, challenges, and discord in that region. Some, especially those on the hawkish right have pronounced it either a failure, misguided, or even worse. On the other hand there is a group of experts that see it as the start of a better more enlightened engagement on the many problems that plague that region.

The naysayers seem intent on not letting Obama find some useful middle ground between making war with Iran and withdrawing America’s interest in the region. Some misguided conservatives at the Council on Foreign Affairs, Foreign Policy, Fox, and the Wall Street Journal seem to view it as a failure unless America makes, a “NATO like” commitment to the Sunni states, tying American troops to the possible Saudi agenda of a war like stance with Iran or even the largely Shia nations and populations.

These naysayers’ position follows that of the oil, banking, and military industries, who see large profits in such a strategic alliance relationship which would be without many restrictions on the buying of American weapons, energy contracts, and financial services.  This misguided position for America and our real allies ends in disaster and pushes us into taking one side of a messy regional, religious, and geo-strategic centuries old conflict which can only end in even more catastrophe for all.  What were they thinking? These are the same people and views that lead us into the Iraq madness.  Significantly, Obama promised at the GCC Summit assistance against external aggression which is a reasonable if still problematic stance. 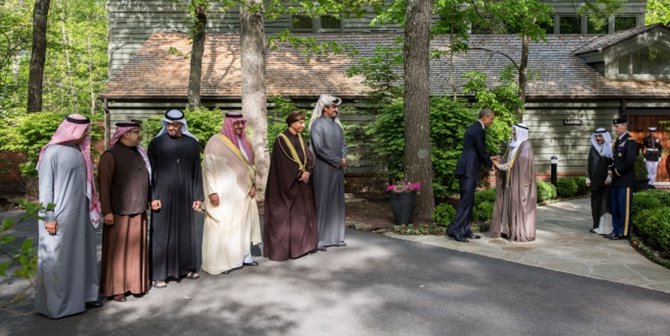 President Barack Obama shakes hands with His Highness Sheikh Sabah Al-Ahmad Al-Jaber Al Sabah, Amir of the State of Kuwait, as Gulf Cooperation Council (GCC) leaders prepare to have a group photo with the President outside of the Laurel Cabin at the conclusion of a summit meeting at Camp David, Md., May 14, 2015. (Official White House Photo by Pete Souza)

The skeptics seem to be driven by ideology and not good strategic sense and honest analysis of the realities on the ground or real American interests. What is needed is not creation of an alliance bent on making war between religious sects but rather help on coming to some measure of common ground and reconciliation between the Sunni and Shia factions.

In place of a NATO type US-Sunni alliance, a better approach would be a larger region wide security framework which would ensure a large measure of security for all participants in the region as well as more prosperity for the citizens of the region. This is something that Obama and also the Western allies can help bring about, if and only if, the Gulf Sunni States see a wider vision and the long-term advantage of a settlement of the age old conflicts and desire stability, peace, and mutual security for the whole region rather than an endless internecine war.

We are already in a dialogue with Iran, which is the de facto leader of many of the Shia group of nations and people. Obama made the key point that an agreement with Iran over nuclear weapons programs with firm verification and other restraints would mean greater, not less, security for the Sunni nations but also for the whole region. The Administration is trying once again to get both sides to recognize that their interests are not in destructive sectarian war but in cooperation and mutual security. This approach may not work at first and it may take some time, but the alternative must be far worse for all sides.

Sectarian hatred and making conflict the only option of solving problems is something no-one can win without unacceptable costs. America is right to try rapprochement and seek some measure of a joint “win-win” strategy through diplomacy however difficult it might be, and those that oppose should remember its cost — continued deaths, hatred, and war.