Obama’s Syria speech fails to impress, de Blasio wins New York nomination, and is the Dow Jones index ridiculous? – US blog round up for 7– 13 September.

Syria once again dominated the news cycle and the blogosphere again this week with little movement towards a US strike against the regime of Bashar al-Assad. On Saturday, The Hill’s Congress Blog looked at why we care about Syria, especially when other nations appear indifferent. On a similar vein, the New Yorker wrote that potential intervention in Syria carries tremendous risks and few prospects for resolution, and might help the conflict to spread to other parts of the Middle East.

The National Journal looked at the anti-war voice of Republican Congresswoman Barbara Lee. From being pilloried by conservatives for her sole dissenting vote against using military force in Afghanistan in 2001, Lee’s stance on Syria is one that many Republicans are now supportive of. Roll Call has ten Senators to watch this week on Syria who are likely to be influential in the lead up to a vote. The Atlantic concluded that the best outcome from Congress would be a “No” vote, as it would offer Obama a way out of what might become a strategic mistake. By Monday, American Thinker says the majority of the American public are against intervening, according to polls. Meanwhile, The Democratic Truth wondered if Obama is wandering into an impeachment trap if he decides to attack Syria without the approval of Congress. 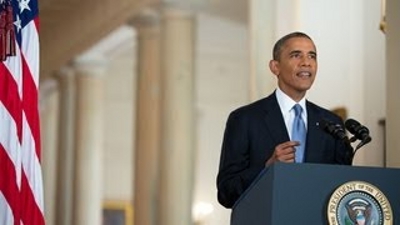 On Monday, at a press conference in the UK, Secretary of State John Kerry rhetorically stated that Syria could avoid an attack by turning over their stockpile of chemical weapons to the international community. This was in turn made into a concrete proposal by Russia, and then accepted in principle by Syria. The White House Dossier says that this is another example of the Obama administration making its Syria policy off the cuff. American Thinker echoes this saying that Russian President Vladimir Putin is now the player on Syria policy, to Obama’s playee.

Tuesday sees President Obama address the nation on Syria. While he praised the possibility of a potential agreement with Russia, while also making a case for intervention, The Atlantic said that it did not resolve Obama’s current paradox of arguing for a very limited intervention, which is likely to not make a great deal of difference to the regime. The American Thinker is much harsher, calling Obama’s address a ‘flop’.

The US has undergone a significant demographic change in recent decades. The Atlantic has new evidence that Republicans can no longer win elections with white voters alone, as evidenced by Obama’s victories in 2008 and 2012. Daily Kos has five states we should be looking closely at for the Senate and House races of 2014. Meanwhile, Roll Call looks at what 2014 might bring in terms of political advertising across the states.

The Political Carnival writes that Senator (and former Presidential candidate) John McCain is moving towards a pro-legalization stance on marijuana.

The seemingly constant disagreements in Congress mean that the public often hold the institution in relatively low regard. But Roll Call argues that divisions within voters themselves, which then feed into Congress, may actually be at fault. The Political Carnival takes a critical look at those Republicans who hold up President Ronald Reagan as a “GOP God”, critiquing his record on Iran-Contra, Arms for Hostages, and chemical weapons.

The Atlantic looks at figures for public sector employment since the start of Obama’s term, and finds that they have plummeted, especially in comparison with previous Presidents.

The Monkey Cage, profiling a new paper, writes that if it were not for slavery, white Southerners would be politically indistinguishable from Northerners.

After a spate of sports figures endorsing government policies, or government agencies partnering with sports teams for outreach, the National Journal looks at how politics and sport often don’t mix.

This week sees a change to three of the thirty members of the Dow Jones industrial average. Wonkblog takes the opportunity to argue that the average is completely ridiculous, given that we can now easily calculate indexes for thousands of stocks.

As Republicans continue to try make the implementation of Obamacare as difficult as possible, especially via the Republican House Energy and Commerce Committee, Daily Kos reports that the Obama administration has had enough, and is responding by addressing the committee’s questions. Wonkblog says that even if states expand Medicaid, there will still be millions left uninsured, despite Obamacare.

On Tuesday, primaries were held in New York City to determine the candidates for November’s mayoral election. Ahead of the primary, The Atlantic profiled the front-running candidate Bill de Blasio. After de Blasio’s victory on Tuesday, the National Journal took the opportunity to reflect on some moments from the nomination campaign of another Democrat, Anthony Weiner.

Blue Jersey looks at the appalling poverty levels in some parts of the state, rates that, despite a booming economy, have skyrocketed under the governorship of Chris Christie. New Jersey also goes to the polls in a Senate vacancy election later this year. Save Jersey writes that Newark Mayor Cory Booker now has an ‘insurmountable’ lead over his opponent, Steve Lonegan, according to the latest polling.

Over in Maine, Dirigo Blue writes that the state’s Democrats are still looking for ways to close what they believe is a skills gap, which is preventing workers from gaining employment. They argue that such a gap does not exist, and that is the party’s ‘Sasquatch’, or mythical being.

Roll Call looks at early polling for the Virginia gubernatorial election, writing that Democrat Terry McAuliffe has a narrow but clear lead over Republican (and current Attorney General) Ken Cuccinelli.

Florida Attorney General Pam Bondi came under criticism this week, according to SaintPetersBlog, for moving the date of an execution which coincided with her re-election fundraiser.

Burnt Orange Report looks at what will happen when food stamp benefits under the Recovery Act run out on 1 November, in a state that has the third highest rate of food insecurity in the US.

Meanwhile, Arkansas Blog looks at voter ID laws and the state, arguing that they are unconstitutional under the terms of the state’s constitution. They also say that the new laws will have very little impact on known voter fraud in the state.

Roll Call looks at Nebraska’s open-seat Senate race in 2014, writing that despite drawing little attention so far, the Republican primary could be an interesting one, describing a potential ‘intraparty slugfest’.

In Missouri, according to the Daily Kos, Democratic Governor Jay Nixon won a fight with the Republican state legislature this week, by vetoing a $400million pro-business tax cut, which the House then failed to override with a vote.

Plunderbund writes this week that Ohioans should be concerned at Governor John Kasich’s appointments to the state’s Medical Board, given their anti-abortion views. These appointments follow Kasich’s recent restrictions on abortion care.

North Dakota’s Say Anything blog looks at a state legislator who lives outside the district that he represents, and wonders if he is actually able to do his job.

This week, Colorado held two recall elections for state legislators. The Daily Kos says that these legislators had been targeted by the National Rifle Association for their support for gun safety legislation. They blame the apathy of Democratic districts for the defeat of the incumbents in the elections.

California’s Capitol Alert says that a new bill which prevents law enforcement personnel from detaining people based on their immigration status (unless convicted of a felony), was approved by the state Senate, and will now go to the House for approval. Democrats say that the law will curb the federal Secure Communities program, which casts a ‘too wide a net’.

Several Republican counties in northern Colorado are keen on seceding from the state, which is currently run by Democrats. Wyoming’s WyoFile writes that if the secession fails, the state shouldn’t help them out by annexing the counties, as it would likely not get enough out of the deal.

This week marked the 12th anniversary of the 9/11 terror attacks on the US. Caffeinated Politics shows us what was making news on the morning of 11 September, 2001 – before the attacks.

The Atlantic has a simple rule for advertising on 9/11 – don’t.

Given President Obama’s rather fraught relationship with Congress, it may not come as a surprise that this week he cancelled the 2013 Congressional Picnic, writes Roll Call.