During wartime, Congress is more willing to defer to the president on matters both foreign and domestic.

It is widely acknowledged that the president is more able to pursue their policy agenda during wartime, but how extensive is this advantage? Based on their research, William Howell and Jon Rogowski argue that not only is Congress’s cooperation with the president’s agenda during wartime much broader than has been previously thought, but this also extends to domestic policy issues as well as foreign ones. They also find that this cooperation dries up as wars conclude, something that President Obama should now expect with an end to conflicts in Iraq and Afghanistan, and the scaling back of the ‘war on terror’.

When all is said and done, two themes may define the story of Obama’s presidency.  The first involves a steady—albeit not uniform—reduction of large military commitments abroad.  When Obama assumed office in 2009, he inherited two live wars in Afghanistan and Iraq and another more nebulous war on terrorism.  Today, the war in Iraq has ended, Americans are slated to withdraw from Afghanistan in 2014, and the president has signaled his intention to scale back certain aspects of the fight against Islamic extremism.  Meanwhile, the defining characteristics of the few new military initiatives promoted by Obama—one in Libya, another now in Syria—are their limited scope and duration.

The second theme is one of declining domestic policy influence, at least within Congress.  After realizing some landmark policy achievements at the outset of his first term in office—from the federal stimulus act to the Affordable Care Act—Obama’s ability to direct domestic policy within Congress has steadily waned.  When trying now to advance elements of his domestic policy agenda, most recently on gun control, Obama regularly trips over opposing forces throughout our polity. 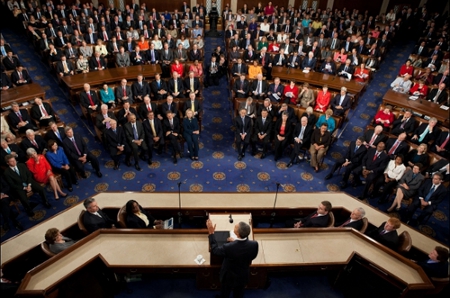 These two trends—one involving the phasing out of war, the other concerning the president’s decreasing policy effectiveness at home—may be more connected than commonly acknowledged. Indeed, a venerable tradition within political science suggests as much, one that dates back at least to Alexander Hamilton who wrote in Federalist Paper #8, “it is the nature of war to increase the executive at the expense of the legislative authority.” Alexis de Tocqueville and Lord James Bryce, upon observing the American system of government, converged upon similar views, with the latter remarking that while “the direct domestic authority of the president is in time of peace very small . . . [in war] in expands with portentous speed.” At mid-Twentieth Century, the nation’s most famous presidency scholars—folks like Clinton Rossiter and Edward Corwin—wrote book-length treatises emphasizing and elaborating upon these same themes.

Our recent research evaluates such claims, examining whether the presence of war leads members of Congress to vote in ways that better reflect the president’s preferences. Investigating every major war since World War II, we find substantial—though not uniform—evidence of a wartime effect on congressional voting behavior. While the outbreaks of World War II and the war in Afghanistan led members of Congress to vote in ways that better reflected the sitting president’s ideological orientation, the beginnings of the Korean and Vietnam wars did not generate especially clear evidence of congressional accommodation to the president. On the other hand, when all of these wars ended, members of Congress drifted away from the president’s ideological stance.

Perhaps our most striking finding concerns the breadth of congressional accommodation to the president. Not only do presidents wield increased success on foreign affairs during wartime, but presidents also have greater success on policy matters that concern plainly domestic issues. Hence, when tracking voting patterns within the 107th Congress before and after the September 11 attacks on purely domestic legislation, we observe a significant and substantively large shift to the ideological right, coinciding with the ideological orientation of then-President George W. Bush.  Wars, it would seem, have the capacity to reshape inter-branch deliberations over much more than just military matters—and they do so, nearly always, in ways that help the president.

Of course, not all wars are created alike, and as our results show, not all wars are associated with equivalent increases in presidential influence. The relevance of war for presidential success traces back to the different perspectives presidents and legislators retain while in office.  Members of the two branches, after all, represent fundamentally different constituencies—the president serving the nation as a whole, and legislators their individual districts.  Legislators, of course, do not ignore the national interest, but they must weigh it against the parochial interests of their districts and states when deciding how to vote on policy.  The president need not make such a calculation, since, as Woodrow Wilson recognized more than a century ago, he “is the only national voice in affairs . . . He is the representative of no constituency, but of the whole people.”

Wars have the potential to augment presidential influence at home, we argue, because they can change the very terms under which policy is debated.  When the nation is at war, legislators, like all politicians, tend to place more weight on the national considerations relative to local ones.  Debates that once were the exclusive province of local considerations are now infused with talk of the nation’s security, the shared fate of its citizens, and the political values that bind them together.  As a result, Congress proves more willing to defer to the president on matters foreign and domestic, since the president both knows and stands to represent what is good for the country as a whole.  Likewise, when peace is restored, members of Congress turn their attention back to their individual districts and states, leading to greater inter-branch disagreement and thus impeding presidential ambitions.

Recent history provides a good deal of support for this argument.  During the major wars of the last century, Congress has proven to be much more accommodating to the president’s budgetary recommendations. At war’s conclusion, meanwhile, Congress’s enacted appropriations diverge more substantially from the president’s proposed budget. For example, Franklin Roosevelt leveraged World War II to protect his labor agenda while Eisenhower successfully sought education reforms by tying these reforms to national security issues raised by the Soviet Union’s launch of Sputnik.

Our findings suggest that with the end of the war in Afghanistan, Obama’s troubles in Congress may only get worse. For if history is any guide, with war’s end, congressional debates will feature local concerns rather than national ones—putting the president at a distinct disadvantage.

This article is based on War, the Presidency, and Legislative Voting Behavior, from the January 2013 issue of the American Journal of Political Science.

Readers may also be interested in The Wartime President: Executive Influence and the Nationalizing Politics of Threat, published in July 2013, by the University of Chicago Press, and in the authors’ recent Politico article, “The Syria effect”.