The growing representation of women in the House and Senate has spurred new questions about differences between male and female legislators. By tracking nearly 140,000 public bills introduced into the House from 1973 to 2008, Craig Volden, Alan E. Wiseman, and Dana E. Wittmer have been able to measure the effectiveness of legislators at moving their bills through the house. They find that on average, female legislators, especially those in the minority party, are more effective than men.

The last several decades have seen a significant rise in the number of women gaining access to political institutions in the United States. Since the early 1970s women have increased their numbers in Congress by more than sixfold, and now hold 18 percent of the seats in the House and 20 percent of the seats in the Senate.  While still far short of parity, the increase in female representation has spurred many questions about what differences, if any, exist between male and female legislators.

Given the prevalence of gridlock that has characterized the most recent Congresses, significant attention has been focused on the claim that female lawmakers are more likely than their male counterparts to compromise, build consensus, and work across the aisle to achieve policy goals.  As U.S. Senator Rob Portman (R – Ohio) said recently, “I don’t want to generalize, because this isn’t true of all [women], but they tend to be interested in finding common ground.” 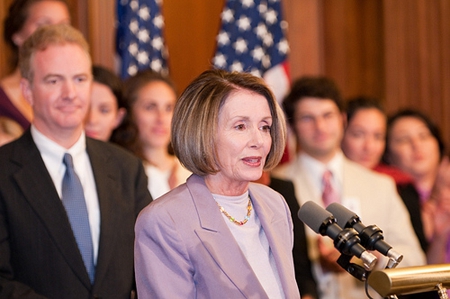 While this ability to compromise has been touted as an asset for effective lawmaking, it does not serve all women equally well in all institutional settings. In particular, we argue that the willingness to compromise helps women become more effective lawmakers when they are in the minority party, but is of limited value in a polarized majority party.  Members of the majority party are already part of a natural (majority) governing coalition, whereas members of the minority party must build coalitions outside of their political party to advance legislation.  When in the minority party, then, female legislators’ tendencies to engage in compromise and facilitate deal-brokering put them in an advantaged position in comparison to male legislators in the minority, who tend to be less consensus-oriented.

To explore the relationships between gender, party status, and legislative effectiveness, we drew on the Legislative Effectiveness Scores created by Volden and Wiseman as part of their forthcoming book on effective lawmaking in the United States Congress.  To create these scores, Volden and Wiseman tracked each of the nearly 140,000 public bills introduced into the U.S. House between 1973 and 2008, and identified how far each bill moved in the legislative process from being introduced until (perhaps, eventually) being signed into law.  After weighting each bill for substantive significance, Volden and Wiseman generated legislator-specific scores to parsimoniously capture how successful each member of the House is at moving his/her bills through the lawmaking process.

As expected, it helps to be a member of the majority party, more senior, or to hold a committee chair.  Yet, controlling for all of these other factors, we also found that, on average, women are more effective lawmakers than are men.

Digging a bit deeper into the data, however, we found that the enhanced legislative effectiveness of female legislators is driven largely by women in the minority party, as shown in Figure One.  More specifically, women in the minority party are about 33 percent more effective than their male counterparts.  They introduce notably more legislation than their male peers, and push more of this legislation through the various hurdles of the lawmaking process.  Female lawmakers in the minority party strive to work across party lines, advance their agendas, and achieve policy goals, while male legislators tend toward a more obstructionist role.

Figure One – Relative Effectiveness of Majority and Minority Party Women, compared with Men 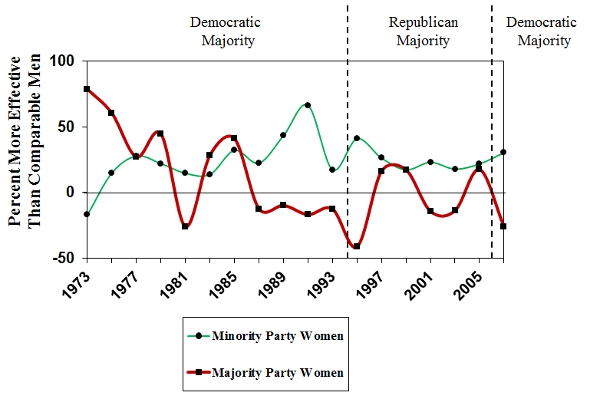 Throughout the 1970s and ‘80s, women in the majority party also outperformed their male counterparts.  Yet, as Congress became more polarized, their consensus-building tendencies became less beneficial as a majority-party strategy, and the lawmaking styles of men became more effective.  As illustrated by the highly partisan lawmaking approach of former Speaker Nancy Pelosi (D-California), these average effects do not characterize all men or women in Congress.  That said, our overall findings hold for Democrats and Republicans alike.

This large-scale data analysis nicely matches countless high-profile cases.  For example, consider U.S. Representative Carolyn Maloney and U.S. Senator Charles Schumer.  Both served as Democrats from New York in the majority party in the 103rd House of Representatives (1993-1994).  Both introduced legislation on war crimes, and both had their bills bottled up in the Subcommittee on International Law, Immigration, and Refugees within the House Committee on the Judiciary.  In the next Congress, now as minority party members when the Republicans took over the House, Schumer no longer sponsored any bills on this topic, whereas Maloney continued to sponsor war crimes-related legislation.  Moreover, she actively built up support for her proposals across party lines, which helped her to navigate her War Crimes Disclosure Act through three different committees, and to its ultimate signing into law by President Bill Clinton.

Across numerous other examples, male lawmakers take on very different lawmaking roles when in the minority, in comparison to how they act when in the majority.  As a point of illustration, lists of the ten minority party members with the lowest Legislative Effectiveness Scores in each Congress during the era of Democratic control feature Newt Gingrich (R-Georgia), Tom DeLay (R-Texas), John Boehner (R-Ohio), and Dick Cheney (R-Wyoming), all of whom went on to enjoy future positions of leadership in Congress or the executive branch.

Do our findings collectively suggest that as women increase in numbers, Congress will become a more effective and collaborative institution? It is difficult to answer this question definitively, but there is reason to believe that any such progress will be quite slow.  Given that Congress is very much a seniority-based institution, it will take time for incumbent and newly elected female lawmakers to obtain positions of influence in the institution.  Over the time period we study, approximately 10 percent of majority-party men held committee chairs, while only 2 percent of majority-party women obtained these posts.  While it is clear that change is coming, consensus-building norms will be cultivated not solely by women entering the House but also by their rise to key positions of committee leadership.

Craig Volden – University of Virginia
Craig Volden is a professor of public policy and politics, with appointments in the Frank Batten School of Leadership and Public Policy and the Woodrow Wilson Department of Politics.  He studies legislative politics and the interaction among political institutions, with a focus on what policy choices arise from legislative-executive relations and from American federalism.

Alan E. Wiseman – Vanderbilt University
Alan E. Wiseman is an Associate Professor of Political Science, and an Associate Professor of Law (by courtesy), as well as co-director of the Center for the Study of Democratic Institutions, at Vanderbilt. Professor Wiseman studies American political institutions, the new field of positive political economy, and legislative and regulatory politics. His current scholarship examines the impact of executive oversight of bureaucratic rulemaking and lawmaking in the United States and other developed democracies, and he is also writing a book on the causes and consequences of legislative effectiveness in the United States Congress.