On Wednesday night Congress came to an agreement to end the US-government’s 16 day shutdown, and to raise the debt ceiling until at least early February. We asked our expert contributors for their immediate reactions to the agreement.

Joshua Huder is a a Senior Fellow at the Government Affairs Institute at Georgetown University.

In the wake of the government shutdown and near default on the nation’s debt, one of the least productive congresses in American history has turned its sights to the biggest policy challenge of a generation. Over the next couple of months members of the House and Senate will negotiate on their respective budgets. This is something of a surprise. Major spending and revenue reforms have flown under the radar for most of the year. Immigration, the now outdated Voting Rights Act, and a number of other issues drowned out the budget debate. It was only recently that spending and revenue were put back on the table to avoid default.

The return to major budget reform is where the irony in American politics comes full circle. The compromise, after failed negotiations on temporary measures, established a conference committee on major policy reforms with a long history of failure.

The budget remains a huge problem and we should hope a major deal emerges. Sequestration has tempered increasing debt in the short term, but America still faces deficits in the long-term if entitlement spending and revenue are not brought into balance. Supposedly everything from Social Security to Medicare to increased revenue is on the table – except for those in each caucus indicating they are not on the table.

Unfortunately, we should expect premature opposition to a not-yet-negotiated deal. The political realities that brought about the government shutdown and the debt crisis have not changed. Polarization has not dissipated. The gulf between the House and Senate passed budget proposals remains enormous. After the debt limit and CR debate it almost appears comical that Congress, which could barely agree on a temporary deal, will be capable of finding common ground on permanent fiscal solutions. So while we should hope lawmakers can find room to agree, it is likely the next major deal will come in just enough time to – hopefully – avoid another shutdown.

The consensus-building role of women was crucial to ending the government shutdown.

In our recent research, we studied the lawmaking effectiveness of men and women in the U.S. House of Representatives since the 1970s. We found that, controlling for factors from being in the majority party to seniority to committee positions; women were more effective on average than men. But the strongest effect was for women in the minority party. Unlike men, who tended to obstruct, women continued a focus on advancing policy. They built coalitions and sought consensus across party lines. And their efforts were rewarded.

It is with this background that we followed the recent government shutdown, the political wrangling, and the ultimate compromise. Although our work did not focus on the U.S. Senate, the lawmaking styles of women in the House are consistent with those found in other legislative bodies. And they are wholly consistent with the differences seen between Sen. Ted Cruz (R-Texas) and Sen. Susan Collins (R-Maine).

Both were minority-party members in the midst of a crisis. But their legislative styles could not have differed more greatly. Cruz advanced a contentious strategy seeking to undermine Obamacare, which was guaranteed to fail, facing certain veto from the president even if it stood a chance in the Democratic Senate (which it did not). In contrast, Collins advanced a strategy of compromise highlighting commonalities across parties and piecing together a group of 14 Senators (nearly half women) determined to end the crisis.

Although the ultimate deal differed in important ways from the Collins proposal, her work kick-started the effort toward bipartisan compromise. Her work in October reaffirmed in the Senate what we found in the House across more than three decades. The consensus-building efforts of women in the minority party play a significant role in the functioning of the U.S. Congress today.

Rosalyn Cooperman is an Associate Professor in the Department of Political Science at the University of Mary Washington.

Following the temporary resolution of the US federal government shutdown, negotiated just hours before the US Treasury brushed up against its borrowing limit, Speaker of the House John Boehner remarked to colleagues and constituents, “We fought the good fight, we just didn’t win.”  The congressional Republicans’ fight here was neither good nor wise.  Standard and Poor’s analysis of the government shutdown identified a $24 billion dollar loss to the US economy. The bipartisan compromise budget and debt ceiling deal is a temporary fix that produced no major concessions to Republican demands to jettison provisions of the Affordable Care Act (ACA, Obamacare) or make changes to entitlement spending driving government spending and the budget deficit.  And, to add insult to injury, the compromise deal is virtually indistinguishable from the budget bill that was under consideration before the government shutdown.

To be sure Republican opponents of Obamacare clearly demonstrated their antipathy to the law but in doing so revealed how little they understand about the yawning gap between a law as passed and a law as implemented.  Republicans should have recognized that Obama and their Democratic colleagues would swiftly reject any demand to defund the health care law and that enrollment in the health care exchanges would proceed even with a government shutdown.  Republicans should also have recognized that the enrollment in those ACA health care exchanges via online portals would likely be fraught with problems (a kind assessment of the not-ready-for-primetime healthcare.gov website) and worked to delay the start of the enrollment period.  Instead, Republicans’ failure to compromise kept media and the public’s attention firmly on the government shutdown, not the clumsy rollout of the President’s marquee legislative accomplishment.  Passing an old-is-new budget bill that sets up the federal government for another potential shutdown and loan default in early 2014 is not fighting the good fight and losing.  It’s more like, as Macbeth decried, “…a tale told by an idiot, full of sound and fury signifying nothing.”

No trust has been built between the important players

Michele Swers is an Associate Professor of American Government in the Department of Government at Georgetown University.

The confrontation over the government shutdown and debt ceiling ended very similarly to other recent fiscal battles, including the recent January 2013 fiscal cliff deal to raise taxes on top earners, the 2012 fiscal omnibus spending bill, and the 2011 debt ceiling crisis.  In each case, House Speaker John Boehner (R-OH) ultimately was forced to put a bill on the House floor that passed with a majority of Democratic, rather than Republican votes.  A pattern has emerged in which House Republicans attempt to utilize the leverage of must-pass legislation on the budget to win concessions from President Obama and Senate Democrats.  However, House Republicans ultimately are too fractured (among their establishment and tea party wings) to unite around a compromise.  More than once, Speaker Boehner has tried to put a last minute proposal on the floor to find that he cannot unify his caucus around specific fiscal proposals and he must allow a bill to pass that Democrats will vote for.

What is unique about the current crisis is that Boehner allowed the most conservative elements of his caucus to push the levers of brinksmanship farther, resulting in the government shutdown.  This brinksmanship won him support from conservatives as a leader who fought the good fight, but it does not translate into the political capital necessary to pursue negotiations with President Obama and Senate Democrats on a grand fiscal bargain that would reform entitlement spending.  There were no negotiations between the White House and Congress, thus no trust has been built between the important players.  Boehner’s inability to unify his caucus around proposals that could advance negotiations demonstrates that he cannot bring the necessary votes to the table to support a deal.  Even Paul Ryan (R-WI), the chairman of the House Budget Committee and lead Republican negotiator in the budget conference required by the deal, voted against the bill to reopen the government, raise the debt ceiling, and create the budget conference.

In this polarized climate, Republicans will not support the tax increases that Obama and Democrats would demand in exchange for making significant changes to entitlement programs.  Thus, it is doubtful that the December budget conference will yield much progress and the next fight will be over funding levels for discretionary spending and the implementation of the next round of the sequester.

The role of the “Wall Street Wing” of the Republican Party has become even more important now.

Roy Meyers is a Professor at the Department of Political Science at the University of Maryland.

On Wednesday Republicans finally acknowledged their complete defeat from the government shutdown they caused; they allowed a relatively “clean” continuing resolution (CR) and debt ceiling increase to be voted on in the House.  Senate Minority Leader McConnell did celebrate that the party kept discretionary spending close to the level in the House budget resolution, but Senate Majority Leader Reid had repeatedly made this point during the shutdown in support of his argument that the shutdown was unnecessary.

The next step will be budget negotiations between conferees from the House and Senate, which Republicans have been avoiding since May by requiring that Democrats forswear tax increases as a condition for a conference to begin.  In July the House also passed funding for defense programs that substantially exceeds the level that would be set by sequestration, requiring massive cuts to many domestic programs strongly supported by Democrats.  So the main uncertainty here is whether Republicans are now willing to moderate their policy demands so there can be a bipartisan compromise between the House, Senate, and President Obama.

The Voteview Blog’s analysis of the CR/debt ceiling vote shows that the House Republicans’ votes on passage conformed with the ideological split within the party–87 for, 144 against.  In my original USApp blog entry, I wrote that the shutdown would end when non-Tea Party members of the House insisted on a clean vote.  (What should they be called–the “Wall Street Wing?”  Your suggestions are encouraged.)  Their role is even more important now, and even more challenging, for most Tea Party legislators are unlikely to back down.  The budget process has followed strict party discipline for many years–whether that will continue with House Republicans is the critical political uncertainty.  There is more potential for cross-aisle compromise in the Senate, but there are also many obstacles to the Senate reaching agreement and then “cramming” the House.  The bottom line: while the shutdown was a big loss for Republicans, it hasn’t greatly shifted the parties away from perpetual impasse. 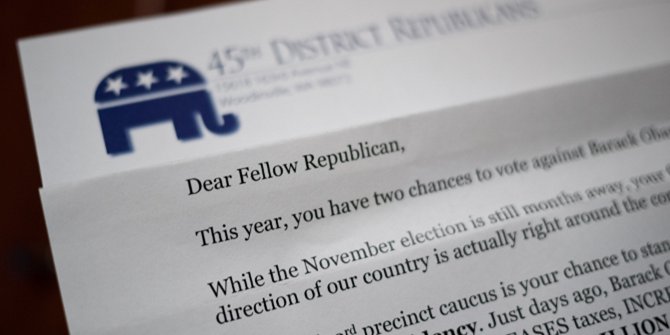